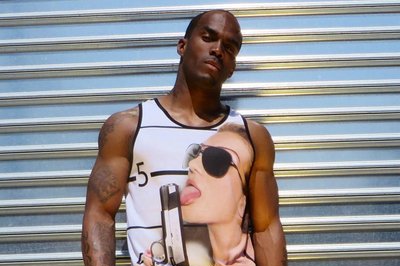 This is the first of a two-part series.

“Your self-respect is priceless. I know, I’m fighting like hell to get mine back.”

For years, Taleon Goffney placed value, above all else, in money. He was motivated by getting as much of it as he could — however he could.

His quest for cash took him from the drug circles of Camden to the rooves of Philadelphia businesses — and into the center of a multi-state, multi-agency manhunt.

Goffney, 32, and his twin brother, Keyontyli, made international headlines in 2008 after they were arrested for a daring burglary spree that netted them more than a half-million dollars. But it was the brothers’ past involvement in the gay-porn industry that earned them even more notoriety than their crimes.

Goffney spent the last six years behind bars, an experience he said put him back in touch with the young man he was before his life took a dark turn — and that convinced him to help keep others from following in his former footsteps.

From a young age, the twins exhibited an aptitude for physicality. Goffney won awards and trophies — some taller than he was — for karate, while his brother excelled at gymnastics.

In school, Keyontyli, who is gay, was often picked on by classmates for not being “manly” enough. Goffney said he stepped in frequently to defend his twin. He was the only one Keyontyli confided in about his sexual orientation.

“I fought his bullies,” Goffney said. “I’d be in school and close my locker door and there’d be three guys standing there wanting to fight me because of him. But I’d always fight his bullies. He’s my brother.”

While the twins had a strong connection, their home life lacked stability.

Their mother gave birth to them when she was just 15, and they grew up in poverty in Camden.

“My mom did what she could with twins at 15,” Goffney said. “But we ended up learning from all the wrong people.”

When he was 18, Goffney had his first major run-in with the law. He and a friend were accused of robbing someone with a starter pistol. Goffney said the incident was a joke, but it was one that landed him more than three years in prison.

“It was another world, it really was. When those doors slammed, it felt like I was never coming out,” he said. “All these guys were super big and I was this skinny, 18-year-old kid. I was around real criminals now. Everything was different.”

He said he rarely left his cell for the first two months but eventually did so to avoid being targeted for being a recluse.

Visits with his brother were difficult, Goffney said.

“It hurt my brother a lot. He’d be crying through the glass. I fought for him his whole life, and this was a time he wanted to stick up for me and he couldn’t do it because there were walls between us.”

After three-and-a-half years, Goffney said he emerged a changed man — for the worse.

“I met some real monsters in there. And you gotta be one to get through it. I came out cold and hard, with this chip on my shoulder. And that’s how I started making the dark choices that led to 2008.”

When Goffney got out of prison, he got a job at Bally’s gym at 15th and Walnut. He said the job worked out for a while, until supervisors found out about his record, and he was summarily fired.

“That broke my spirit,” he said.

During Goffney’s time in prison, Keyontyli, an aspiring model, had entered the gay-porn business.

Knowing his twin was eager to make cash, Keyontyli offered to bring him into the industry.

“I was in no hurry to go back to prison. I had just given them 43 months. This was the only way Keyon could help me. He told me no one was going to know about it. And I went for it.”

His first job was in Vegas. Goffney, who identifies as straight, said the gig started easily, but quickly progressed.

“First it was still shots and I was like, OK, take my shirt off? I can do this. But then it got more … demanding,” he said. “It was then, ‘Do this for the video and do this.’ There were times when — and I don’t mean to be graphic — but to get hard for a scene, I’d have a female magazine and be chewing Viagras.”

The Vegas job paid $750, which Goffney blew that night.

“After we did the scene, they all wanted to go to the gay club and I jumped right in a cab and went to a strip club. I tried to just … get it off me. I drank all these beers and spent the whole $750. I tried to drown what happened.”

On the plane ride home, he said Keyontyli recognized the effect the job had on him; Goffney said he was transfixed, staring straight ahead at the seat in front of him, while his twin put his hand over his.

“I didn’t move. He just held my hand and I was staring, thinking, I can’t believe I did that. I can’t believe I went through with it; I had a man’s penis in my mouth. It hurt him too. He wanted to do more for me.”

“For this one video, they wanted me to be the ‘top’ to this guy they had. And I’m sitting there, with this guy’s ass in my face, and I wasn’t erect. I tried Viagra and it just wasn’t working. So they let Keyon do the scene, and no one knew. I was still paid the money.”

Solution on the streets

And his martial-arts aptitude came in handy when he had to elude law enforcement.

In May 2006, Camden County police arrested Goffney on drug charges. But he smashed out the back window of the police cruiser and, handcuffed, dove out of the car, ran to a nearby pond and swam away. A few months later, he attempted to break into a liquor store and ended up jumping, unscathed, three stories from a roof to again escape capture.

Goffney said he would case a business first to learn its layout and would let about two weeks lapse before returning to commit the burglary.

“I’d always wait. I didn’t want to be the last guy on the security camera. I wanted to have 50-100 people on the camera in between and then I’d come back.”

Toolbelt in hand, Goffney relied on his physical prowess to mount the roof of the business, cut a hole and drop inside, breaking open the ATM.

From 2006-08, the twins were suspected of committing more than 40 burglaries throughout the region.

“I thought I had the best-kept secret, nobody was doing what we were doing. Who’s thinking about breaking in places and robbing ATM machines? We’re not hurting nobody, that’s how we justified it. Ya know, the money’s insured, fuck it. That’s what we thought.”

The payoff was big.

The jobs would sometimes pull in tens of thousands of dollars. Goffney said he was enamored with the cash flow.

He said his obsession with the money was rooted in his upbringing.

“We never had money. My whole life I was broke. We were on welfare till we walked out of our mom’s house. And to have it like that, overnight? It was like trying to catch up, trying to have the things we didn’t have growing up. It was Christmas on steroids. We never had bikes, vacations, nice cars, so we did it all, whatever we wanted.”

He said there were nights he couldn’t sleep, he was so eager to be the first customer at the mall the next morning. And Keyontyli was even worse with his spending, Goffney said.

“The more I did it, the braver I got. There were times when I would show up at the scene the next day and watch the investigators. I would read the paper and be like, ‘Keyon, we’re cool.’ I’d be watching the police. I didn’t know they were watching us. Money injects you with stupidity. I felt like it was never gonna end.”

Next week, read about Goffney’s six years in prison and what he’s hoping to do with his new-found freedom.