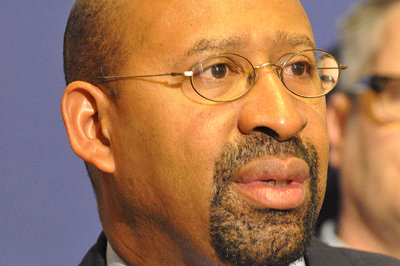 Philadelphia Mayor Michael Nutter is among a coalition of mayors urging the U. S. Supreme Court to mandate marriage equality across the nation.

The U.S. Conference of Mayors on Monday adopted a resolution calling on the nation’s top court to issue a definitive ruling in favor of marriage equality. The vote came during the conference’s annual meeting, which concluded Monday in Dallas, Texas.

The resolution was signed by 29 mayors, including Nutter, former president of the conference.

Nutter is a longtime member of the Mayors from Freedom to Marry, which, according to this week’s resolution, has more than 400 members from 39 states and Washington, D.C.

The resolution references the sweeping court decisions recently handed down in favor of marriage equality, as well as the “untenable patchwork” of marriage laws, which the mayors say impose “great legal uncertainty and hardship on committed same-sex couples in the 31 states that deny their freedom to marry and refuse to respect their lawful marriages, even as the federal government rightly treats these couples as married for federal programs and purposes.”

The group formally endorsed marriage equality in 2009. Since that time, the resolution noted, “support for marriage for same-sex couples has grown to nearly 60 percent nationwide, with majorities in every region of the country and opposition diminishing dramatically.”

The document went on to urge “federal courts, including the U.S. Supreme Court, to speedily bring national resolution by ruling in favor of the freedom to marry nationwide.”