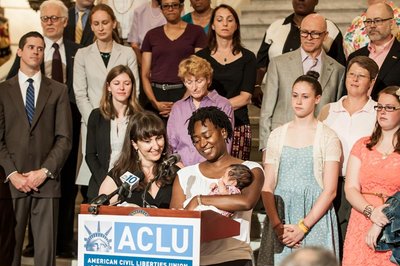 For the first time ever, same-sex couples are suing the state of Pennsylvania for the right to marry.

The American Civil Liberties Union of Pennsylvania Tuesday morning filed a lawsuit in the U.S. District Court for the Middle District of Pennsylvania on behalf of 23 plaintiffs, who are calling on the federal court to declare that the denial of marriage rights to same-sex couples in Pennsylvania is a constitutional violation.

The ACLU is being assisted in the suit by firm Hangley Aronchick Segal Pudlin & Schiller, based in Philadelphia.

Mary Catherine Roper, senior staff attorney at the PA ACLU, said the agency’s decision to file the suit was directly related to last month’s Supreme Court ruling striking down a key section of the Defense of Marriage Act, the federal ban on same-sex marriage, as unconstitutional.

Pennsylvania has had its own similar ban on same-sex marriage since 1996.

“We’ve been preparing for this for a long time but didn’t file sooner because we were waiting for the decision. We knew what the Supreme Court said was going to matter,” Roper said, noting that she anticipates the landmark DOMA ruling will be at play in the state suit. “Justice Kennedy really expressed beautifully the harm that comes from not recognizing marriage for committed couples, the lack of dignity and insult to the couple and their children. Hopefully what he said will help frame the conversation about what this is really about.”

The suit contends that excluding gays and lesbians from marriage violates their constitutional rights to due process and equal protection, and does not “rationally further any legitimate government interest,” the question considered in the rational-basis review of a law.

The ACLU spent several months identifying and interviewing potential plaintiffs, Roper said, and limited the list to 10 couples. Some of the couples are married legally in other states, and others are not yet legally married.

There are three couples from Philadelphia and three from Pittsburgh, as well as one each from Bangor, Downingtown, State College and Harrisburg. The couples are a mix of men and women and are diverse in age and other factors, Roper noted, with couples who are bi-racial, African-American and other races. They also run the gamut of socio-economic status, with both blue- and white-collar workers whose occupations range from bank executive to dog walker.

In addition to the couples, the plaintiffs included two teenage children of one of the couples and a woman whose longtime partner died in May.

“We think it’s a really beautiful selection of people,” Roper said. “We wanted to show how broadly this impacts people.”

The defendants will have 30 days to respond, and could either file a motion to dismiss or answer the complaint, which would then prompt a discovery period, during which time depositions will be taken. Next would come a round of briefings several months later, before any potential trial.

“There’s nothing very sexy on the horizon, and litigation can go in lots of different directions depending on how the defendants respond,” Roper said.

Roper said the PA ACLU recently hired a community organizer who will lead a public-education campaign around the importance of marriage equality, an effort that will go hand-in-hand with the lawsuit.

“We are not filing for an immediate emergency motion to change the law,” Roper said. “It’s important for the court to hear basically every reason why this is important and why they don’t have any reason to oppose the freedom to marry — other than disapproval of the lesbian and gay lifestyle, and that is not enough. So we don’t expect this to be over in a month or six months; it’s really important to educate the court while we’re educating the public about how this affects people and why equality is necessary.”