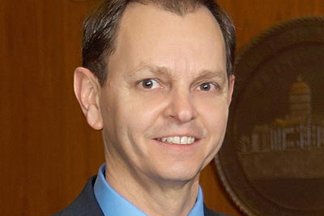 Dan Miller is looking to become the first openly gay mayor in Pennsylvania, and only the second of a state capital in the nation, when he faces off against incumbent Harrisburg mayor Linda Thompson and other challengers May 21.

Miller will be in town for a campaign fundraiser, organized by Harvey Hurdle and Rep. Brian Sims, 6-7:30 p.m. March 14 at the home of Hurdle and Kevin Yoder, 241 S. Third St.

Miller has served as Harrisburg city controller for the past four years and was on City Council for four years before that.

He and his campaign supporters hit the ground running the first week in January, knocking on more than 3,000 doors and hosting two meet-and-greets each week for the past two months, with about 50 campaign volunteers circulating petitions and campaign information throughout the city.

While Thompson has in the past made references to Miller’s orientation — once calling him a “homosexual, evil little man” — Miller said the people he’s spoken with on the campaign trail are interested in his plans for turning around the city’s financial position and not his LGBT identity.

“I’m a CPA and have a very heavy financial background, with an MBA in finance. Many of the issues I’ve dealt with in my career are around finances, and Harrisburg’s finances right now are horrendous. So when people look at me, I don’t think they think, gay, they think finances first.”

Miller is endorsed by the Victory Fund.

Having an out mayor of the state capital could be a boon for LGBT progress statewide, he said.

“All of the state legislators are here a couple days a week. They know what’s going on in Harrisburg; our mayor and City Council get a lot of press with being in the capital. So I think electing a gay mayor here could have a huge impact on the legislators,” Miller said, noting he would also work to unite the LGBT lobby on both sides of the state. “We need an effective lobbying arm here in Harrisburg. A lot of our resources are in Philadelphia and Pittsburgh, and having a gay mayor in Harrisburg would be a good way to bring those resources together and put some real muscle behind legislation in Harrisburg. A gay mayor in Harrisburg could really get the ball rolling.”

Miller is not the only out candidate running in the city.

Ben Allatt is an out contender for City Council, and Harrisburg is already home to an openly gay treasurer, John Campbell.