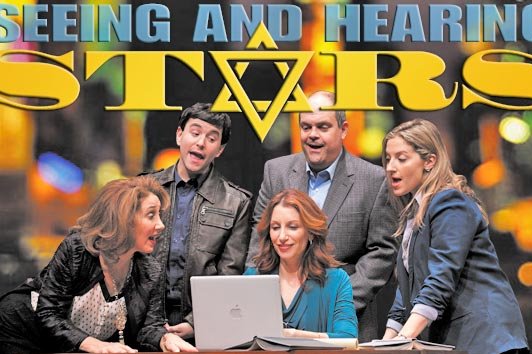 Philadelphia Theatre Company opens its new season with the world premiere of the new musical “Stars of David,” through Nov. 18 at Suzanne Roberts Theatre.

Out actor, screenwriter, playwright and acclaimed drag performer Charles Busch (“The Divine Sister,” “The Lady in Question,” “Red Scare on Sunset” and “Vampire Lesbians of Sodom”) worked on the story for the play, which takes the interviews and transforms them into songs by some of Broadway’s most acclaimed composers and lyricists, including William Finn (“The 25th Annual Putnam County Spelling Bee”), Duncan Sheik (“Spring Awakening”), Sheldon Harnick (“Fiddler on the Roof”) and Susan Birkenhead (“Jelly’s Last Jam”), among others. It also features one of the last songs written by the late Marvin Hamlisch (“A Chorus Line”). The production has an ensemble cast featuring Nancy Balbirer, Alex Brightman, Joanna Glushak, Brad Oscar and Donna Vivino. Busch said the work could be seen as somewhat of a departure, especially for fans who are used to some of his more outrageous and campy productions. “It’s somewhat closer in tone to ‘The Tale of the Allergist’s Wife’ than ‘Vampire Lesbians of Sodom,’” he said. “It’s really a musical, which is something I don’t do very often. I’m not sure it’s ever been done before like this. On one hand it’s a musical review. These songs are all based on interviews with famous people. There’s a song that’s based on this interview with Joan Rivers. There’s a song based on an interview with Kenneth Cole. Another song is based on an interview with Ruth Bader Ginsburg, etc. Most shows would be content with that: Just do a review of these different profiles. We’re attempting to weave throughout the songs an actual play, which is based on the idea of a journalist who is interviewing all these people and how these interviews reflect her own life and what she’s going through and her own exploration of her relationship to her faith.”

Busch said he read the original book t after he was tapped to work on the musical incarnation.

“It feels so long since we started this thing, although it’s only been about a year,” he said. “I think the producers had sought me out and I wasn’t sure I wanted to do it. I ran into Gordon Greenberg, the director, and his enthusiasm was infectious, so I decided to throw myself into it. Then I read the book or maybe I read before I ran into Gordon. It’s a fascinating book. I kind of devoured it, reading about a vast group of prominent people from all different fields and their relationships to something as complex as their Judaism, whether it’s related to their culture or their religious aspects or not at all. A lot of the men had married outside their religion. It’s a fascinating book. It’s certainly interesting for all these composers who had the task of musicalizing [sic] the individual interviews. We got this incredible group of musical-theater writers, and each one has an individual interview to compose to. It’s fascinating to see how each one did it, because we gave them total freedom and it was a scary leap of faith to see what they would come up with. They really evolved the piece.”

Not that the stories need help to be compelling.

Busch said the accounts were gripping before the musical enhancements.

“They are compelling for different reasons. The Kenneth Cole piece is very moving, about how he married a very Catholic Maria Cuomo. It didn’t seem to bother him originally to have his children raised Catholic and now, years later, it has become a more complex issue for him. It was a very touching interview and a moving song. Another one I really loved is Abbey Pogrebin, who wrote the book. She is actually a very talented lyricist herself. She actually wrote a couple of songs, including a song based on Ruth Bader Ginsburg’s interview from when she was a 16-year-old girl. Her mother, whom she was so close to, died and she wanted to read the Kaddish at the funeral to be part of the Jewish ritual. Women are not allowed to participate in that way and it was a really traumatic experience for her. “Then there’s some funny stuff, too. Joan Rivers, her interview is a wild rant about all the things that the Jews have given the world and how no one seems to appreciate it. It’s rather remarkable how Bill Finn was able to absolutely capture the rhythms of Joan’s speech in a song. The actress singing doesn’t have to put much effort into imitating Joan Rivers because the phrasing of the song itself has that staccato rhythm. It’s good stuff.”

Busch added that, even though the show’s focus is on being Jewish, there are some stories that will be of interest to the LGBT community.

“There are a number of gay participants,” he said. “Tony Kushner participated ,and there is a wonderful song about him that is very much about being a gay person in a Jewish family. Marc Shaiman wrote a song about Andy Cohen from Bravo. Those are the two that spring to mind immediately.”

Busch said he relishes the opportunity to work on plays like “Stars of David,” which are a departure from those he normally writes and performs in.

“It’s like switching to different channels,” he said. “I enjoy my genre parodies where I’m the star of the show, I have to admit. But then I can turn into the dowdy author and take on an interesting creative challenge. And certainly this project is very challenging, trying to wed these songs to another story. So I use that side of my brain.

“As far as style goes, I very much at home with the outrageous and the naturalistic portrayal of the people around me. I can’t say I have favorites. I’d say the outrageous Hollywood-inspired plays of mine are easier to do. I just have it in my bones — movies and acting style. I can whip up one of those plays very quickly.”