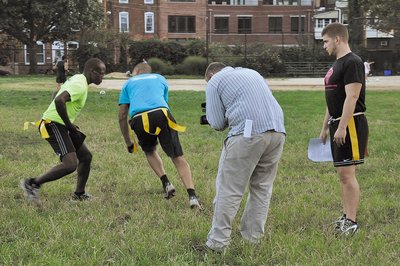 Kurt Douglass remembers when the controversy was swirling and the lawsuits were flying over the first Gay Olympics in San Francisco 30 years ago this past weekend. The International Olympic Committee successfully sued over the use of the word “Olympic” and thus the Gay Games were christened. A celebration of the landmark first LGBT competitions will be held Oct. 20-21 in Los Angeles.

Two weeks ago, Douglass attended the annual FGG board meeting in Bulgaria as a representative of Team Philadelphia. While he was there, he became one of three at-large board members and will work to promote membership and greater participation in the Gay Games.

Douglass said the choice of Bulgaria was intentional.

“To promote and encourage the athletes in countries where gays are still fighting for basic rights and hopefully increase visibility and openness in the process,” he explained. “One of the goals when selecting meeting sites, and even games sites, is to bring struggling groups into the public view and let them, and their city and their nation know that it’s OK to be gay.”

The end result between local and international outreach should essentially be the same, according to Douglass.

“In a local sense, we should be working to get sponsorship to help those athletes who may not have a local gay-sports organization to help them.”

On an international level, FGG helps athletes from antigay countries participate via sponsorship donations and other global support.

Douglass also said he hopes Team Philadelphia will get more involved in the outreach to athletes outside of Philadelphia, including central and northeastern Pennsylvania, in preparation for the 2014 games in Cleveland.

“Two years sounds like a long time,” Douglass said. “It’s really not. It takes a lot of time and energy for the athletes just to get physically prepared. This is the time for [Team Philadelphia] to plan and prepare and get some logistics worked out to help people get to the games. And there is no reason why we shouldn’t have one of the largest and strongest competitive groups at the games in Cleveland,” he said.

Douglass also stressed the importance of asking what a league, team or athlete needs, as each might have different requirements. Some organizations are large and well-funded, while others may have a core group without much support and still others may have no support group or funding whatsoever. He added that needs might include monetary support for training, travel or housing or even local interaction to stimulate the competitive spirit.

Douglass attended and supported Team Philadelphia in 2010 at Gay Games VIII in Cologne and said he plans to compete in 2014 in tennis.

For information on the FGG, past Gay Games or Gay Games IX, go to www.gaygames.org.

Ever think what it might be like to be a Philly Roller Girl? Your chance to check it all out just showed up. PRG is hosting two skate workshops and tryouts this fall at Millennium Skate World in Camden, N.J. Workshops on skills, rules and play will be held the second Sunday in September and October and tryouts will be the second Sunday of November. If you’re just interested in watching the excitement, the next bout is a double-header Sept. 8 at the Liacouras Center, 1776 N. Broad St.; www.phillyrollergirls.com.

Short stops o Philadelphia Gay Bowling League started Sept. 5, but they bowl through April so it’s not too late to get into play this season. PGBL bowls in Deptford, N.J.; www.facebook.com/pages/Philadelphia-Gay-Bowling-League/149976031747838. o The Gryphons rugby football team opens its fall season Sept. 8 at George Pepper Middle School. Game time is 1 p.m.; www.philadelphiagryphons.org. o The Philadelphia Rock and Roll half marathon to raise money for the William Way LGBT Community Center is Sept. 15; www.waygay.org. o Greater Philadelphia Flag Football League’s competitive team, The Revolution, heads off to compete in the annual Gay Bowl Sept. 21-23 in Denver. You can wish them good luck at the “Hold Onto Summer” pool party Sept. 9 at The Raven in New Hope.

Countdown to Gay Games IX: 700 days. If you have a game, tournament, fundraiser or party for Get Out and Play, email [email protected].