A group that works against societal oppression will mark its anniversary with a weekend of thought-provoking discussions designed to empower and unite gay men of diverse backgrounds.

Men of All Colors Together will celebrate its 31st anniversary with a weekend of activities May 4-6.

MACT is an affiliate of the National Association of Black & White Men Together and mobilizes gay men against the injustices plaguing people of all identities.

One of those epidemics in particular — classism — will take center stage at next weekend’s anniversary celebration.

The roundtable discussion will explore the impact that the widening income gap is having on the country, especially on the LGBT community.

“We have two categories of society now — the wealthy and the homeless — but what about the people in the middle?” said Stevie Martin-Chester, MACT membership chair. “I’m neither wealthy or homeless, so where do I fit in? These are questions we need to be asking our president, our Congress, the rest of society about where the people in the middle fit because it’s important that we’re not forgotten.”

The discussion will include a call to action for members to create strategies to tackle classism in their lives.

Following the event, MACT members will gather for dinner and an awards banquet at Picanha Brazilian Grill, 6501 Castor Ave.

Martin-Chester said all three winners embrace the mission of MACT.

“Every year we give awards to prominent people in the community who are doing great work and following our purpose — fighting the ‘-isms’ in the world, so sexism, classism, racism and homophobia. These people are fighting that and they’re doing a really good job. This is more of a thank-you award than anything else, a thank you and a realization and recognition of the work they’re doing.”

The weekend will wrap up with a brunch from noon-2 p.m. Sunday at Darling’s, followed by an outing at SundayOUT!

Tickets to all of the weekend events are $70 per person or $120 per couple, with individual prices per event. 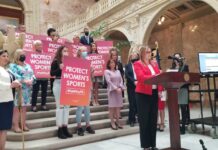