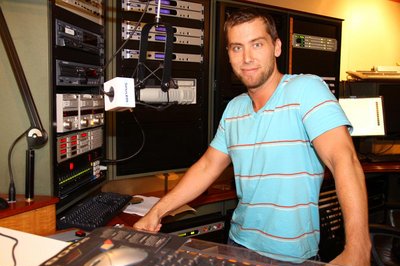 Out pop music star Lance Bass recently launched “The Pop Ten,” a weekly music and pop-culture show on SiriusXM’s LGBT-themed OutQ radio. Listeners across the country can hear Bass counting down the top 10 songs and pop happenings for the week, backed by celebrity guests and an assortment of his closest friends.

Bass, a former member of the boy-band juggernaut that was ‘N Sync, definitely has the pedigree to hold court on the current state of pop culture. The group that made Bass famous has been on ice ever since the launch of Justin Timberlake’s massive solo career and, later, his movie career.

Since then, Bass has had a variety of ventures including his own music management company, acting, trying to buy his way into space, coming out and writing his autobiography, “Out of Sync.”

PGN caught up with Bass to talk about the new show and how he finds the time to keep up with everything in the world of music and television.

PGN: What kind of response have you been getting from the show? LB: Everyone has been great. Now that social media has gotten out of hand lately, it’s fun to see that direct reaction from the fans. I just love that they can be a part of the show with calling, tweeting, requesting songs. I just love that.

PGN: What do you do to keep up with everything that’s going on in pop music? LB: I pretty much watch every TV show out there. I produce TV too, so I call that research. I’m a TV-holic. My TiVo is completely full with everything. TV I got covered. To keep up with the rest of pop culture, I use the Internet. It’s just so easy to go to Yahoo and see what all the latest stuff is. There’s so many blogs out there, so if something is happening or a celebrity does something stupid, you’re going to hear it within seconds through Twitter.

PGN: What are some of your favorite shows on TV right now? LB: Summer is a little dead but my indulgence is “Big Brother.” That’s one of my favorite shows and what I get addicted to in the summer. “True Blood” is great. I love all the HBO and Showtime shows that are out right now. “The Big C” is one of my favorites as well as “Weeds.” I can’t really say I like scripted or reality more than the other, but I lean more toward the scripted stuff because I just love actors. I love when I can see an amazing actor on television. That’s been a huge trend lately — film stars are doing television. Television is at an all-time high right now.

PGN: Was it your intention to give the members of your peanut gallery as much talk time as yourself on your radio show? LB: Yes, definitely. I love what Chelsea Handler does when she brings in three or four guests and they take turns giving it to people. I wanted the show to have that type of feel. The whole purpose of the show is to have a Friday-night party. It came about because that’s what my friends and I do. On a night we’re going out, we come over to my house, we fix a few drinks, we put on some good music, we get ready and we just talk about the week and then we go out to a bar. That’s the atmosphere I wanted to create for the listeners. I want you to turn the show on, get with your friends, start getting ready for the night and listen to how we do it. What you’re hearing on the radio is pretty much what happens with me and my friends every time we get together.

PGN: Do you think shows like “The Voice” and “American Idol” take all the mystery out of being a pop singer/entertainer? LB: No. I think it’s great to show the world how hard it is to become an entertainer and the hard work these kids have to go through in order to get to that level. I love that. I think it discourages a lot of people from even going into the entertainment industry, to see how impossible it is to have a successful career. All these thousands of people are going for the same thing. It really depicts a true story of what it’s going to be like to get in the industry. The mystery behind it all is still there because it’s all about the individual artist and that, I don’t think, is really given up with these shows. The producers show what they want us to see but when you really get to know these artists, there’s a lot of mystery behind them.

PGN: Are you still doing A&R (artists and repertoire development) and production for new artists? LB: No, not really. I have a television show that I’m producing next year that’s probably going to be music based. That’s probably going to be the first time I get back into the A&R side of music. The last time I did any A&R was 10 years ago. But it will be nice to be able to combine my love for television and music into one show.

PGN: Do you encounter any LGBT artists looking to break into music and, if so, what advice do you have for them? LB: All the time. I get people on Facebook sending me demos, especially from the community. It’s great. I always tell them, right from the beginning, be yourself. Especially the ones that are like, “I don’t know if I should tell people that I’m gay.” But that becomes a story if you hide something. So right out of the gate, you have to be honest and it doesn’t become a story. It becomes about your music. That’s the No. 1 advice that I give, especially to the gay community. You have to be true to yourself.

PGN: Do you think it’s easier these days for new pop artists to be out from the start? LB: It’s gotten better in the last couple of years but we have a long way to go. There’s still a huge stigma with being gay in the entertainment industry, music or acting. I know tons of casting directors and people at record labels. They candidly tell me that they can’t cast gay actors in a lot of these roles. A lot of record labels won’t sign musicians just because they find out that they were gay and they wouldn’t be marketable enough. It’s sad to hear but that’s the truth right now. It’s a hard thing to break into. I think it’s going to take an amazing artist coming out and making great music. The thing is, you can’t hide talent. If someone’s talent is enough and you have great music, you can’t hide it. It doesn’t matter if you’re gay or straight. It’s going to take someone coming out that is amazingly talented and that’s going to change a lot of people’s minds.

PGN: Are there any artists right now that you are digging that might be a surprise to your fans? LB: If fans really know me, they know my musical taste is very diverse. I love everything from bluegrass to rap. I love it all. I don’t think anything would surprise them.

PGN: Who would you like to have as your on-air guests? LB: Anyone that would want to come to my show. I’d love it. That’s what I love about the show. We really don’t plan any guests. We don’t plan hardly anything. It’s whoever is around when we record this thing. That’s what’s fun. People will be walking around the studio and I’ll pull them in. If I have friends in town that happen to be celebrities, they’ll stop by. If I could have anyone I want, I’d love to have Jennifer Aniston on the show.

PGN: With groups like Backstreet Boys, New Edition and New Kids on the Block reuniting and performing of late, is there any pressure on ‘N Sync to get back together? LB: That’s the No. 1 question I get on any given day of my life. There’s no pressure for us to get back on tour. It’s a matter of us having time to do it and right now we definitely don’t have any time to get back into the studio to record. That would take us many months, especially with Justin being a movie star. It’s almost impossible for him to even do any solo stuff. So to ask him to do any ‘N Sync stuff would be impossible.

PGN: Do you think any artist or group will ever top the record ‘N Sync set for album sales — over 2 million copies of “No Strings Attached” in one week? LB: I don’t see it ever being broken because it was a different time. We didn’t have iTunes back then. Now that’s how everyone buys their music. It’s album sales. It’s single sales. Which is great because you’re only making single releases. You don’t do the “Oh, we have to fill the album with four more songs that we don’t believe in.” It was fun to record but you’re not giving it your 100 percent. No, now I think all artists have to give a hit song every single time. As far as our record being broken, it would take a phenomenon these days to be able to do that. Which is kind of fun, because I can say we’ll have the record for a long time.

PGN: Do you have any ambitions at this point of moving forward in music as a solo artist? LB: Eventually one day, yes, I would love to do that, but right now is not the time. I have so many things launching this year and next year. Maybe after the TV shows I’ve produced air, that’ll be the time I can take some time off to go into the studio and start playing around.