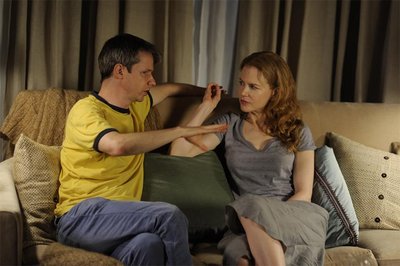 Director John Cameron Mitchell’s fine film adaptation of David Lindsay-Abaire’s Pulitzer Prize-winning play “Rabbit Hole” is a distinct change of pace for the creator of “Hedwig and the Angry Inch. ” The filmmaker tells this story of a couple coping with the loss of their son with considerable restraint after the wild theatrics of “Hedwig” and the sexual gymnastics of “Shortbus.” He also coaxes flinty performances from Nicole Kidman and Aaron Eckhart as Becca and Howie, the grieving parents.

“I saw it after I read the screenplay. It’s very affecting. I think the screenplay gives the play dimension and richness — there are characters [not seen in the play] we get to meet in the film.”

Opening the production is one reason why “Rabbit Hole” is compelling on screen. Mitchell takes the title story from the play — written by Jason (Miles Teller), the boy who killed Becca and Howie’s son — and turns it into a comic book that is assembled over the course of the film.

“It was more visual, and I bought into that right away. I am a big comic-book fan and into animation,” the director explained. “It seemed a great way to explain the scientific theory of a parallel universe that makes everything possible and gives [Becca] comfort when religion and therapy don’t.”

Mitchell certainly understands the need to find a viable coping mechanism during times of loss. As a teenager, as he lost his younger brother. He recalls, “At the time, you didn’t really talk about your feelings — you had religion, which was not sufficient for me. We are still dealing with irrational guilt when someone dies — we think we must have done something bad to deserve it. This [film] brought up those feelings again and it was a cleansing experience to make this. For my family too, I think.”

Audiences may resist seeing “Rabbit Hole” during the holiday season because of its dark subject matter, but Mitchell sees the film as life affirming, not depressing. “It’s certainly a very intense experience to watch the film,” he acknowledges, “But it’s a good cry as opposed to a bad cry.”

He continues, “I don’t think I would want to make this if it was ‘Antichrist,’ [the Lars Van Trier film] which explored the same topic. That film left me with nothing that I could work with in my life. It’s important for me to leave people with something useful in their lives.”

Mitchell likens “Rabbit Hole” to powerful dramas like “Ordinary People” that have become emotional touchstones for audiences over the years. And he hopes that viewers will embrace his film. He suggests that “Rabbit Hole” shares a quality with his popular “Hedwig” in that it is about “isolated people seeking a connection, cracking out of their personal prisons.”

The director even compares Becca to Hedwig — he describes the gender-bending heroine as someone who was “mean to everyone around her” — because like Hedwig, “Becca lashes out at people, but she engages our sympathies and is understandable for her mistakes.” When Becca mouths off at someone in therapy or slaps a stranger in the supermarket, it is shocking. Kidman’s tightly controlled performance may be why audiences are inclined to forgive the monstrous Becca for her bad behavior.

Mitchell gushes, without modesty, that “Rabbit Hole” is Kidman’s “best work.” He praises her ability to wordlessly express her emotions, “There is an unadorned quality to her performance.” He describes his direction of the Oscar-winner consisted of “Guiding her gently down certain paths, [often] chiming in with subtle thoughts.”

The filmmaker emphasizes that he downplays things in this age of what he calls “overacting, over-writing and over-directing.” But the one false moment in “Rabbit Hole” is a flashback sequence in which Becca witnesses — and reacts to — the death of her son (which happens out of frame) — a scene not in the original play.

“Rabbit Hole” is certainly a risky project for any director and Mitchell rises to the challenge. But one questions remains: Why would this story of a straight couple losing their son appeal to a gay man whose work is so steeped in gender and sexuality? Mitchell considers the idea of whether his being gay explains why he is drawn to this kind of material, or if he has an innate sensitivity for the film’s forlorn characters.

“I don’t know. Everybody in this business of entertainment and art is some kind of freak. It’s inherently queer to be an artist or entertainer because those people were freaks when they grew up. They work it out on a public stage. I don’t think about [sexuality] consciously. I wouldn’t define queer by sexuality. It’s more of a way of looking at a word from an outsider’s point of view based on gender, not race or class. That may be why queer filmmakers are interested in female characters. You’re already a second-class citizen if you’re a woman. ‘Precious’ is as much a queer film as it is investigating a certain segment of the black community.”

Then he concludes, “I think about good material. And working with virtuosos was a real treat.”