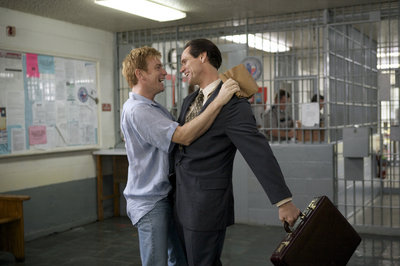 After multiple distribution delays and rumors about the editing of “graphic homosexual sex” scenes, “I Love You Phillip Morris” finally opens at Ritz theatres. The big question is: Is the film worth the wait? The answer, for the most part, is yes.

This queer — as in odd, as in gay — comedy is based on a strange but true story of Steven Russell, a con man who goes to great lengths to keep his lover — the Phillip Morris of the title (Ewan McGregor) — happy. And just like its hero, this wildly uneven film tries especially hard to please as well. A politically incorrect comedy, a gay love story, a character study and a Jim Carrey vehicle all in one, the film shouldn’t work, but somehow it does.

“I Love You Phillip Morris” opens with Steven as a young boy being told he is adopted. The news prompts him to become a cop as an adult to find his birth mother. However, Steven discovers that he is better manipulating the law from the criminal side than enforcing it. He is soon spurred to live a life of fraud and crime. But, as Steven is wont to do in narrating his remarkable story, this is getting ahead of things.

Early in the film, Steven admits that he is a gay man. His decision to live openly and not lie about his life prompts him to divorce his God-loving wife (Leslie Mann), move to South Beach and get a hunky boyfriend (Rodrigo Santoro) and two cute dogs. But Steven soon acknowledges, “Being gay is really expensive.” So he initiates “slip and fall” suits to reap false insurance claims, and eventually lands in jail.

During a prison fight, Steven spots Phillip Morris and falls for him instantly. Their love, it seems, is “destiny,” and Steven starts manipulating the system to exchange love letters with Phillip. Eventually, he coordinates Phillip sharing a cell with him, and the lovers commit to sharing the rest of their lives together.

Once Steven and Phillip are released, they continue their relationship and even get a house together. However, Steven supports their domestic happiness by secretly continuing his extravagant cons, bilking companies out of money. When he is sent back to jail, Steven orchestrates an escape. This pattern of conning and escaping prison continues, making Phillip unhappy with all of Steven’s lying.

“I Love You Phillip Morris” is a fantastic — as in unbelievable, as in terrific — story, and directors Glenn Ficarra and John Requa (of “Bad Santa” fame) tell it nimbly. The various comedic elements — from slapstick comic moments and sight gags to word play and double entendres — work because they are delivered at a fevered pitch.

Likewise, Carrey is encouraged to act unhinged throughout. He throws himself down escalators with gleeful abandon, and when he scams his way into a high-paying job, his expression is priceless. Viewers may share a feeling of complicity with Steven when he succeeds in his deceit. His criminal character is admirable, if not lovable. Carrey, with his smarmy false charm and his outsized personality, is terrific in a role tailor-made for his talents. He is completely convincing as a con and a gay man, who is willing to risk it all for his beloved.

That said, if viewers don’t like the actor’s manic antics or his sleazy character, “I Love You Phillip Morris” could feel like a prison sentence. Carrey is front and center the whole film, and he neither gives up nor lets up.

Alas, McGregor, who is adorable here, is given too little screen time. The actor, who has a penchant for nudity, also keeps his clothes on, disappointing viewers hoping for a big gay sex scene between the leads.

While the Steven-Phillip relationship is touching at times — especially when they are separated — their romance is not the plot; it only drives it. Their kisses — often shown in silhouette — are sweet, while their discreet sex scenes are used to hang jokes. These can be amusing, as when the couple finally get some alone time and declare, “Enough romance — Let’s FUCK!” or tasteless, as when Phillip spits rather than swallows Steven’s semen after an off-screen blow job.

Given that “I Love You Phillip Morris” focuses so much on the love Steven has for his boyfriend, it makes sense that the film keeps Phillip’s character mainly on the sidelines. However, when Steven lies to his lover and secretly implicates him in his crimes, it becomes tough to sympathize with the con man. But then the film sucker-punches viewers just as it does Phillip with an unexpected reveal that may change everyone’s opinion.

All this manipulation is maddening for the characters and perhaps for the audience, but it actually serves the story. What makes “I Love You Phillip Morris” work is that it succumbs to its own crazy, Steven-ish logic. In its weird way, the film actually explores issues of truth, trust and fidelity in gay relationships. It is noteworthy that Steven never cheats on Phillip, but he also keeps his sexuality a secret from his employers. He also has a surprisingly healthy relationship with his ex-wife. This shows that despite his issues involving abandonment, identity and honesty, Steven does have concerns for his loved ones. He just expresses them in a very outrageous — even unsettling — way.

These tender sentiments help the film rise above its running dick jokes and a gay stereotype or two. The filmmakers ask audiences to care about and laugh both with and at these larger-than-life characters. Carrey’s strong performance and McGregor’s firm support allow this to happen.

“I Love You Phillip Morris” is certainly going to polarize audiences, but it deserves to be seen — especially now that it is available.