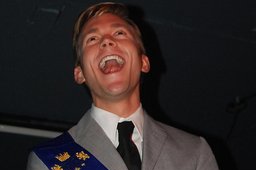 A Lexington, S. C., native took the 2011 U.S. Mr. Gay title last weekend in the City of Brotherly Love and Sisterly Affection when, for the first time, Philadelphia played host to the national competition.

Eddie Rabon bested 19 other competitors to take the national title, which included a question-and-answer portion and formalwear and swimsuit contests. The competition was slated to have 21 contestants, but Chicago’s entrant came down with pneumonia and wasn’t able to attend.

Rabon, 25, is not required to fulfill any fundraising obligations during his tenure as U.S. Mr. Gay, but will likely make numerous charity appearances throughout the year at LGBT-focused events.

Rabon will compete in the International Mr. Gay competition, although details about that event have not yet been released.

Philadelphia Mr. Gay, Ryan Mattis, was first runner-up and Rehoboth representative and Philadelphia resident Charlie Biggs was crowned Mr. Fitness. New York City and New Brunswick, N.J., rounded out the top five positions. While East Coast cities made up more than half of the participants this year, competitors came from various cities across the country such as San Francisco, San Diego and Nashville, Tenn.

Before the formal contest began, the contestants assembled at the Liberty Bell for a photo shoot coordinated by the Greater Philadelphia Tourism Marketing Corporation and the National Park Service to promote the “Get Your History Straight and Your Nightlife Gay” advertising campaign.

Q Lounge hosted the question-and-answer part of the competition on Nov. 12, followed the next night by the formalwear, swimsuit and final crowning at Voyeur — which organizers said drew an estimated 400 people.

Still reeling from his win less than a day earlier, Rabon sat with PGN for his first interview since claiming his new title. The current New York City resident originally moved to The Big Apple to work in musical theater and now works at a private school for celebrity and high-profile children, as well as volunteers for Broadway Cares/Equity Fights AIDS, an AIDS services and advocacy organization based in New York City.

PGN: First off, congratulations. How do you feel about all this now that you’ve had a day? ER: Thanks. It’s still sinking in. It’s going to take a few days.

PGN: So do you prefer to be called Eddie? Ed? Edward? ER: Eddie. Oh, yes, Ed was a horse and I only get called Edward when I’m in trouble.

PGN: Your mom? ER: Of course. She came up from South Carolina to spend the weekend with me. She’s my biggest supporter. I love my mom.

PGN: When did you come out? ER: I came out to my older brother when I was 16. He was a cadet in the Air Force at the time. We talked and he convinced me to sit down with our parents and tell them.

PGN: How did that go? ER: Pretty well. It was a little odd calling a family conference since we’d never had one before. My mom thought it was going to be about wanting my brother’s car. It was a little unsettled around the house for a few days. Then my mom took me to our church counselor. We talked for about five minutes and he called my mom in and told her she should be proud to have a son so well adjusted to his lifestyle.

PGN: What do you do in New York? ER: I started by going up to be in musical theater. A hip injury sidelined me. Now I’m working with others and helping them move toward their dreams. It’s very rewarding helping others attain their goals. Recently, I was part of getting a young man a job touring with “Billy Elliot.” I really like my job.

PGN: Do you have anything special you’d like to do with your new title? ER: I want to give back to the community more, like my work with Broadway Cares. My goal for the next year is to draw some visibility and a positive image not only to the title but also to the community as a whole. I want to work with youth groups, The Trevor Project and other organizations, to stop bullying and cyber-bullying.