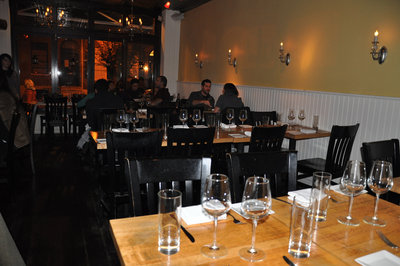 Judging from the packed house we witnessed on a Tuesday night at Mercato, 1216 Spruce St. , the Italian-inspired BYOB doesn’t need our help to fill seats. Still, we had to know what the fuss was about.

The whole grilled artichoke ($12) started things off quite nicely. While well seasoned with sea salt and olive oil, the citrus aioli it was served with — along with the rather involved process of getting the meaty parts — elevated the dish to finger-food royalty and kept it interesting beyond expectations. It also kept our napkins in constant use.

Most people we know have a disdain for Brussels sprouts, probably due to the scarring encounters most have had with them as children. But if Mercato had introduced them to us in their masterful fashion, braised in appplewood smoked bacon, we would have happily inhaled them. Alas, we had to wait until now. While we fully acknowledge that anything could be made enjoyable by cooking it in bacon, we had to take our hats off to this dish nonetheless for pulling off the near-impossible feat of making the dreaded sprouts worthy of devouring.

Mercato’s pasta dishes were exceptional and covered a wide range of flavorful territory. The biggest surprise was the pumpkin fettuccini ($22), a perfect dish for this time of year. Earthy richness abounded in the dish, which tempered any expectations of sweetness with crispy parsnips and sage brown butter. This was definitely some next-level comfort food. Another must-have is the spaghetti and grilled octopus ($22), which struck a perfect balance between the garlic and citrus of the light sauce and the fresh flavors of the octopus.

On the more traditional end of the spectrum, but no less spectacular, was the short-rib ragu ($23), which was tender and had just enough spice to complement the ricotta gnocchi it came with it. The lobster and shrimp with pyramid pasta ($24) also delivered savory enjoyment, lightly smothered in Parmesan brown butter and accompanied with fresh asparagus.

The pan-seared diver scallops ($25) was the first dish that didn’t wow us. The scallops were perfect, as was the Parmesan crisp and truffle-oil garnish. But the English pea risotto, while fine in its presentation and texture, the flavor lacked in sophistication compared to other dishes on the menu. The scallops were definitely doing all the heavy lifting with this dish.

The one-two punch of desserts came in the form of the bittersweet molten chocolate cake ($9) and mascarpone cheesecake ($8). The molten chocolate cake lived up to its reputation of the 800-pound gorilla of fancy desserts with its hot, oozing decadence, allowing the vanilla ice cream planted on top to live just long enough for you to get a taste before its assimilated into the mocha abyss. The mascarpone cheesecake, by comparison, was far more subtle and didn’t have to show its pimp hand to win us over. The cool and creamy treat was given a great crunch and texture, topped with roasted walnuts and maple syrup sauce.

You might want to get in line for a table at Mercato now.