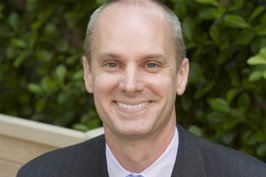 As a child growing up in Ohio, Drew Becher would cut the grass, plant flowers and pull up weeds — not as a punishment or for money, but rather for fun.

But this self-proclaimed weird kid is about to take the helm of the country’s first horticultural society, one that in recent years has been gaining increasing prominence in the international realm.

Becher, who is openly gay, will take over as president of the Pennsylvania Horticultural Society in June, when longtime leader Jane Pepper retires.

In addition to hosting the Philadelphia Flower Show — the world’s largest indoor display of its kind — the nonprofit PHS funds community gardens and greening projects throughout the city.

Becher most recently served as executive director of the New York Restoration Project, a greening effort founded by Bette Midler. Under his direction, the NYRP launched its MillionTreesNYC and, in the past three years, has planted more than 310,000 trees in the city.

Before moving to New York City, Becher spent two years in Washington, D.C., working on economic-development efforts as deputy director of the Office of Planning, and also serving as the associate director of the Department of Parks and Recreation in the district. From 1996-2004, Becher worked in city government in Chicago, holding such titles as assistant director of planning of the Department of Cultural Affairs, assistant to the mayor and chief of staff of the Chicago Park District.

Becher was instrumental in the institution of numerous beautification projects in the Windy City that garnered Chicago a place on Forbes’ list of the most beautiful cities in the world.

“It’s actually been quite rewarding,” Becher said of living and working in some of the country’s largest cities in the past decade. “You take the different experiences that happen in each city and the many different neighborhoods you work in, and it actually helps you to form a better product, a better thought and a better end to what you’re trying to accomplish. And it’s really eye-opening, because while each city and area is extremely different from one another, they face a lot of the same issues.”

Becher, 40, and his partner, Eric, have owned a house in Chestnut Hill for several years, which they’ve now permanently moved into, and he said he’s been a fan of the Philadelphia horticultural scene, and PHS, for some time.

“I’ve been orbiting around PHS for a while, going to a lot of the same events and conferences and serving on the same boards as some of the staff, and even when I was out in Chicago we tried to create a flower show to rival Philadelphia’s; we took a lot of cues from this organization,” he said. “I came here in the ’90s and talked to some people from the Center City District and toured the area, and this whole area is just amazing. I think Chanticleer, Longwood [Gardens] and Morris Arboretum are really three of my favorite places in the whole country.”

Unlike other cities he’s worked in, Becher said the City of Brotherly Love and Sisterly Affection is already tuned into the importance of focusing on the environment.

“The horticultural and greening stuff is already in the DNA, the makeup of this whole region,” he said. “It’s not something that we need to re-teach anyone. When I was in Chicago, that whole component wasn’t there — it is now, but it didn’t used to be — but that’s not the case here in Philadelphia.”

Becher said he wants to guide the city through the implementation of the mayor’s plan to make it the greenest metropolis in the nation within the next five years, noting Philly can become more aesthetically pleasing as it grows more ecologically conscious.

“What needs to be done here is really just trying to help us get where we want to be through Mayor Nutter’s Greenworks project and by introducing sustainable practices and working on the landscapes. My overall goal is not just to make Philadelphia the greenest city, but also the most beautiful. They go hand in hand.”

The PHS president-elect said that in terms of the Philadelphia International Flower Show — during which he gave a tour to his former boss, Midler, last month — he has several areas he’d like to work on in the coming years.

“This is one of the signature events in the region and now it even has an international flair. And now I’d like to focus on introducing some more interactive technology to the event and upping the focus on the design side of it as well. And I’d really like to beef up the whole education component that goes along with the show; the students are the future and the future clients who will be attending the Flower Show, so we want to get them involved.”

He said he’s also eager to pay tribute to the men and women who cultivate the flowers featured in the show but whose hard work is rarely acknowledged.

“I really want to bring out the people component. There are so many people involved who enter their violets or their orchids or whatever it may be, and I want to find a way to bring them out. People come by and see these great flowers, but there are also great people who helped to grow them.”

Becher said he’s eager to implement these changes and others with the support of the entire horticultural community in Philadelphia — a place, he said, that already feels like home.

“People in Philadelphia have been so welcoming. It’s just great to see how open and welcome this city has been. Philadelphia should be proud of that. This city has so much to offer, and I’m really looking forward to working with all of our partners and everyone in this city to make this the greenest and most beautiful city and a place where even more people want to be.”