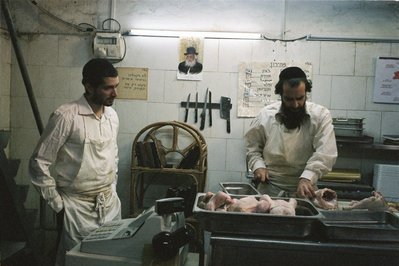 Local filmgoers have two upcoming opportunities to see worthwhile gay-directed movies, both of which explore themes of identity and Judaism.

This weekend, Theatre N in Wilmington, Del., presents the area premiere of gay filmmaker André Téchiné’s absorbing new movie, “The Girl on the Train.” Based on a true story, this drama concerns Jeanne (Emilie Dequenne), a free spirit who is out of work and in debt. While her mom (Catherine Deneuve) wants Jeanne to get a job with Jewish lawyer Samuel Bleistein (Michel Blanc), Jeanne prefers to work as a caretaker at an electronics store with Franck (Nicolas Duvauchelle), a hunky wrestler who woos her. However, a violent incident at the store changes everything for Jeanne and Franck and prompts her to do something drastic.

To reveal what Jeanne does might spoil some of the film’s drama, but Téchiné does this anyway — perhaps because the case is so well-known in France. Jeanne draws swastikas on her torso, cuts her arm, neck and face and goes to the police claiming to have been attacked by six men on the train. She explains that, although she is not Jewish, it was a hate crime — the criminals were motivated by the fact that she was carrying Samuel’s business card. She is, of course, lying, but a media uproar results and Samuel himself becomes involved in handling Jeanne’s case.

“The Girl on the Train” is mesmerizing as it depicts the circumstances and consequences of Jeanne’s act. Téchiné allows the issues of class, race/ethnicity and identity to ricochet as audiences draw their own conclusions from what’s presented to determine why Jeanne acted out in this particular way, and what she hoped to achieve from her actions.

Téchiné elicits outstanding performances from his excellent ensemble cast, especially the lead actresses, who rise to the challenges of their complex, meaty roles. Deneuve is extraordinary as Louise, able to express her deep concerns and troubles through the simplest facial expression. Watch her size up Franck at a dinner one evening; she is appropriately wary of this would-be-charming man. When she makes plans to meet Samuel for a concert one evening, her face conveys her delicate emotional state beautifully as she has second thoughts.

Likewise, Dequenne makes Jeanne more than just a cipher or symbol. A fragile, slightly lost young woman, she is pulled by her emotions and unable to think beyond her immediate situation. Dequenne captures her selfishness and insensitivity perfectly.

Téchiné never judges his characters in “The Girl on the Train,” and this is perhaps the film’s greatest strength. He leaves audiences to decide for themselves about the issues of guilt and responsibility.

A thoughtful and at times potent melodrama, “Eyes Wide Open” is distinguished for addressing the emotional and moral responses toward homosexuality within Jerusalem’s ultra-Orthodox community. Aaron (Zohar Strauss) is a kosher butcher and father of four who is married to Rivka (Ravit “Tinkerbell” Rozen). During a rainstorm, Ezri (Ran Danker), a Yeshiva student, enters his shop to use the phone. Soon, Aaron offers Ezri a job and a place to live.

Ezri, it is revealed, is grappling with a lover rejecting him for his studies. Meanwhile, Aaron is silently struggling with his sexual identity. When Ezri coaxes Aaron to join him in a bath at an immersion spring, Aaron’s same-sex desires are awakened. And although the butcher insists that resisting lust will bring them closer to God, a few scenes later, the men are kissing and embracing passionately in the shop’s freezer.

“Eyes Wide Open” shrewdly focuses its attention more on faith than sex; the men discuss sin and righteousness between erotic touches. Yet Aaron is warned by members of his religious community that “nothing good can come of this [relationship].” This point is driven home in a subplot involving an engaged woman having an affair with another man. Given the community’s reaction to this inappropriate behavior — and Aaron’s participation in admonishing her — he knows the response to his dalliance with Ezri would be worse. Furthermore, as various students threaten Aaron and his business, Rivka suspects her husband is up to something improper.

Director Haim Tabakman has crafted a striking drama about sin and desire and is well-served by his talented cast. Strauss makes his internal conflict tangible and Danker is terrific as the irresistible Ezri. The way these men communicate their love in a look, a touch or a gesture is as freighted with meaning as the symbolic water imagery — rain, the immersion spring and a broken pipe — that defines their relationship. In support, Rozen makes Rivka sympathetic, and her unspoken tensions with her husband are best presented in a scene where she buys some meat from Ezri.

Tabakman also features stylish touches — such as the reflection of Aaron’s detractors in the panel of a passing van — that give “Eyes Wide Open” an emotional punch. The film’s appropriate, provocative and ambiguous ending also accomplishes this effect.