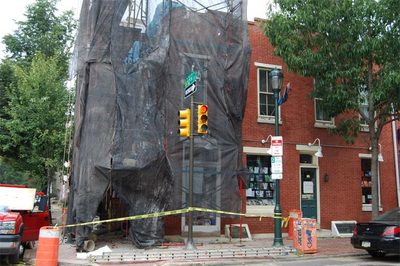 This year’s OutFest street festival includes an extended block on 12th Street between Spruce and Pine to support the fundraising efforts at Giovanni’s Room bookstore, 345 S. 12th St. Volunteers have been meeting for several weeks to coordinate events to be held in conjunction with OutFest to raise money for the replacement of the exterior brick wall of the historical building, estimated at $55,000. Efforts began almost immediately with a drive to “buy a brick,” with about $15,000 raised so far.

The entire block down to Pine Street will become an outdoor book sale on Oct. 11, with a dozen publishers from around the country lending their support and local authors on hand to sign copies of their books. Additionally, there will be a used-book sale comprised of store and donated items. Used books can be dropped off at Giovanni’s Room through Sunday, and any individual donation of 10 or more books in good condition will entitle the donor to a drawing entry to win a Giovanni’s Room gift certificate.

In addition, organists Wesley Parrott and Peter Richard Conte and the Philadelphia Voices of Pride will perform for this one-time event at 3 p.m. at St. Luke and The Epiphany Church, 330 S. 13th St. Conte performs daily on the world’s largest organ, the 28,000-pipe Wanamaker organ at Macy’s; Parrott graduated from the Curtis Institute of Music and has recordings available through the Organ Historical Society. The suggested donation for the concert is $20.

The Brick-in-the-Wall raffle also goes into high gear during OutFest. A special drawing will be held at the end of OutFest for passes to see “Diana: A Celebration” at the National Constitution Center and for VIP passes to the Ritz Five. The grand-prize drawing for a Philadelphia Gayborhood weekend package — two nights at The Independent Philadelphia hotel, guest passes to 12th St. Gym, a pair of massages from Value Massage and a $100 gift certificate to Knock — will be held later in the year.

There will also be a bake sale on the second floor of the bookstore Sunday afternoon, with donations from More Than Just Ice Cream and members of the Women’s Reading Group.

This past summer, Giovanni’s Room owner Ed Hermance learned that the store’s brick wall facing 12th Street was structurally unsound and in need of immediate repair. To replace the wall on the historic building, which dates to the 1880s, each brick must be removed, cleaned and replaced to retain the original façade. The project began the first week of September with an estimated timeframe of three to four weeks, though it is not yet completed. Once the exterior wall is rebuilt, work will begin to replace the interior walls and shelves.

Open for 36 years, Giovanni’s Room became the oldest LGBT bookstore in the country when Oscar Wilde Memorial Bookstore in New York City closed earlier this year. LGBT bookstores have also recently closed in West Hollywood, Norfolk, Va. and Boston, and many others across the country are on notice.

Additional volunteer opportunities and donation information can be found at www.giovannisroom.com or by visiting the store.