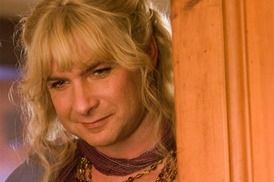 Liev Schreiber gives a scene-stealing performance as Vilma, a cross-dresser who provides Tiber’s family with security in “Taking Woodstock. ” In this Q&A, Schreiber talks about dressing up and being comfortable in one’s own skin. PGN: Audiences first saw you don drag in your feature debut, “Mixed Nuts,” and in “Taking Woodstock,” you are in drag again. What appeals to you about putting on a dress? LS: Not much. It’s awful. The depilatory aspect is really enough to make you not want to do it anymore. The thing is, once you put the clothes on, it starts to be fun. It’s just infectious. I think any man who has ever worn women’s clothing will admit that. It just releases something — an inner vanity you never knew you had, a femininity. It’s just fun.

PGN: You don’t play Vilma as over the top. Your give her security, especially when she tells Elliot, “I know who I am.” How did you approach the character? LS: Ang said to me very early on that he saw Vilma as an angel. That was a very big note. I didn’t know what that meant at first. But then kind of working on it, I saw that, if nothing else, Vilma was certainly someone who was about contradictions and also someone who seemed to be remarkably comfortable in her own skin, strange as it was. And that delivered a really significant message, I thought. Having done a transvestite before, I think they are really risky parts because they really run the risk of being cliché.

PGN: What kind of research did you do for playing Vilma? You did the Catskill period before, in “A Walk on the Moon.” LS: I [looked] into what was going on in terms of the sexual revolution within gay culture and the subset of drag culture in the ’60s, and I found that there was some really interesting stuff going on, particularly in San Francisco. There was a group in the Haight called the Cockettes [men in beards who wore dresses]. This new movement was more about defying the traditional definitions of gender in theater work and drag work and things like that. Before the 1960s, guys would dress like their mother or iconic Hollywood actresses. And now you had guys incorporating masculinity into the drag world. I thought that was really interesting. And the idea that a man could contain that duality, that he could, with a drag character, also manifest elements of his masculinity and that a drag character, being a subset of actual sexuality, that a homosexual man could have all of those aspects of feminine and masculine and actually something else that I think was fueled by hallucinogenics was really quite wild. That seemed a good place to start with Vilma because it pushed the boundaries of acceptance the furthest and, if he could be comfortable in his skin like that, then he could be comfortable.

PGN: Did you base your character on anyone you knew? LS: I knew a guy — a friend of my mother’s when I was a kid — named Silver Bell and he wore dresses and long flowing silk pants. And Silver Bell was probably in his 60s, and he had this big gray beard and long gray hair, and I got this sense from him, which I believed about Vilma as well, that he probably had been a drag queen, and that now he had decided he wanted to live somewhere in the middle. There were plenty of men who didn’t want surgery, but wanted to live and dress as women — and what happened was the organic elements of being a man, like hair growth and size, kind of made them develop a different way of dressing and looking. It’s not about putting on an outfit and doing a gig at night; it’s about this is how they live.

PGN: Was it difficult to run in heels? You’re chasing those guys in that one scene … LS: [Sassily] In all fairness, I had wedges.