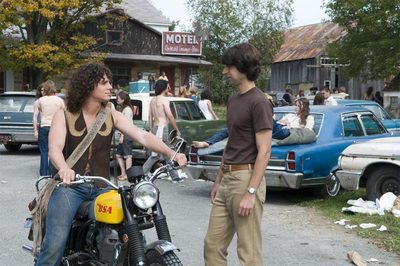 Some of the more prominent elements in “Taking Woodstock” are hair, nudity and mud. (The concert itself, deliberately, happens off screen.) In this Q&A, actors Jonathan Groff (Michael Lang) and Emile Hirsch (Elliot’s friend Billy, a Vietnam vet) talk about getting into their characters.

PGN: Jonathan, you have the iconic Michael Lang hair. Was that your real hair or a wig? JG: I grew out my hair. They were going to use my real hair and perm it, but with the humidity, it was too unpredictable. We had to get this just right, we couldn’t chance it. So they put my head in plaster, and made me a wig.

PGN: At least you were spared having to get naked or muddy. Were you grateful? JG: I did watch the mudsliding and thought, Oh my God! I want to do that! I should have gone to set that day and just jumped in. Nudity, I’ve done so much of that on stage that I certainly don’t feel I missed out. I’ve experienced that many times before, but the mud would have been fun.

PGN: Emile, you did both the nudity and the mudsliding. Can you describe your experiences? EH: I got fucked! I had a lot of fun doing the mudslide stuff. When I first saw it, it looked so dirty. And where do you find a mudslide? You can’t make a date to do that. But it was a lot of fun. The vegetable oil and pig dung that made up the movie mud was kinda gross, though. The nudity was a little sketchy, because we had 300 extras and a lot of them were old women and young children. It was kind of weird exposing yourself in that way. It wasn’t like your average Chippendales crowd. It was like the Disney Channel. There were some teenage girls I had to get naked [in front of] and dance around like a buffoon. Plus there were cell phones everyone was holding. In between takes people would be trying to take photos, but we put a stop to them. PGN: What about the hair and clothes? This is your second period piece after “Milk.” Do you have an affinity for bygone eras? EH: I’m done, dude, done! No … I like period movies. They’re cool — as long as I get to keep my hair. [He combs it in front of his face to look like Cousin It.]