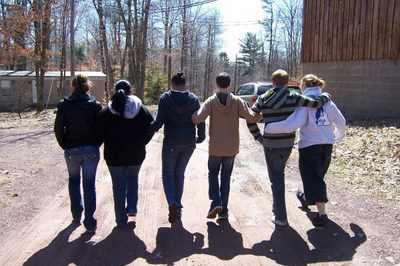 Although LGBT teens undeniably face hardships uniting their sexual identities with their family and social lives, LGBT young people of faith may be faced with another layer of difficult questions.

To help those youth find some answers, a local church organization will host its second annual retreat weekend for LGBT Christian teens.

The camp, which was first staged last spring as an effort of the Southeastern PA Synod Lutheran Bryson/Gay & Lesbian Taskforce, will give the teens a chance to explore their faith in a safe and encouraging environment.

Fred Wolfe, camp director, said the camp is modeled after an LGBT Christian teen retreat depicted in the documentary “Camp Out.”

“When the movie ‘Camp Out’ was released, our bishop and our youth ministry specialist saw it together,” Wolfe said. “Afterward, the bishop just said she felt that what she saw in the movie was something that she thought we needed to be doing here in Southeastern Pennsylvania. So the impetus came from the top of our denominational structure.”

The camp takes its name from Psalm 139, a Bible passage that states in part: “I praise you because I am fearfully and wonderfully made; your works are wonderful, I know that full well.”

Robin Ford, who helped organize the camp last year, said the weekend illustrates the truth of this passage for the participants.

“I think one of the main things these teens learn is that no matter who they are, God loves them,” she said. “They’re wonderfully made, no matter how they feel.”

Jen McGonigle, one of this year’s organizers, said the camp allows the teens a safe space to be themselves among other likeminded youth.

“LGBT youth, especially Christian youth, are not always in a situation where they can come out to their parents or their friends or families,” McGonigle said. “A lot of the drive behind the camp is to provide those teens who fall into that category with a way to have some sort of support structure and make them feel that you can live a Christian life and still be gay. Not all churches necessarily provide for that sort of environment.”

Throughout last year’s retreat, attendees watched such topical films as “Saved” and “For the Bible Tells Me So,” participated in discussions on various aspects of the Bible and their relation to the LGBT community and took part in other community-building activities. The six youth who attended last year made a scrapbook of their weekend experiences and each designed their own quilt square, something McGonigle said they’re looking to have the teens build upon this year.

Wolfe said that openly gay author Mitchell Gold offered to donate a crate of copies of his new book “Crisis: 40 Stories Revealing the Personal, Social and Religious Pain and Trauma of Growing Up Gay in America” for the campers to use.

“These stories are about how religion has caused spiritual damage in some people’s lives as they’re growing up, so we’re going to be able to use them and compare them to some of the Bible stories, and the book also has a whole raft of resources for the teens. This was an awesome show of support from Mitchell,” Wolfe said.

Bryanne Hornung, an 18-year-old senior at Philadelphia High School for Girls who attended last year and is planning to return to this year’s camp, said one of the most memorable aspects of the trip was getting the chance to work with her fellow youth, some of whom she still keeps in touch with, on a service project for Bear Creek Camp.

“We got to do volunteer work, helping build an outdoor chapel at the camp, so I think one of the best parts was that we got to help out the camp together,” she said.

Maddie, a 16-year-old sophomore from North Penn, said the “fellowship” she built with the other youth provided her insight into her own life.

“I was going through some questioning,” she said. “I was almost sure that I was gay but I wasn’t entirely sure, so I thought if I went, I could get a handle on what I was feeling inside and talk to other kids like me. And I got to hear other people’s stories on what they were going through and how they handled things, so it gave me the strength to handle it better in my own life and in my own school.”

Wolfe noted that the diversity of last year’s camp fueled the ideas that were exchanged among the teens.

“The six youth who participated represented a very diverse perspective. We had four from the inner city and two from the suburbs; four women and two men; and it was racially diverse, so we had some great perspectives,” Wolfe said. “We’ve seen some of these young people move on to leadership positions, so I think this camp empowered them to feel like they could step up in their own communities and be a leader and not have to worry so much about their sexual orientation.”

McGonigle said she hopes the camp encourages more youth to embrace their identities and strive to reach their full potential.

“I think one of the things we’re trying to aim at is, both within a religious context and outside, the idea that you have to care about yourself and be comfortable in your skin. Hopefully that’s part of what they will take away from this weekend.”