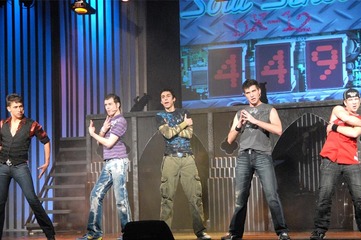 (Or maybe they have and we didn’t know because no one we know could conceive of such a thing.)

Since debuting in 2004, the satirical musical “Altar Boyz” — at the Media Theatre through Feb. 15 — has become something of an off-Broadway sensation and a touring hit as it follows the story of a fictitious boy band on the last night of its tour.

“I think it’s kind of a take on what a boy band would be like if they did Christian music, because there haven’t been any groups that have done that,” said Philip Drennen, who plays bandleader Matthew. “It sort of pokes fun at both. It’s geared toward Christian music with sort of a humorous spin without offending anyone. Just the stereotypes that all five guys bring to the show as a parody of the boy band comes in because each one is a really specific type and really could be straight out of any boy band.”

Keeping with the stereotypes of boy bands (’N Sync, Backstreet Boys, 98 Degrees, New Edition, New Kids on the Block) and Christian groups, the Altar Boyz feature archetypical members, all with biblical names: Matthew (the leader), Mark (the sensitive one), Luke (the bad boy), Juan (the Latin heartthrob) — think of the four canonical gospels — and Abraham (the Jew).

Every member has an issue of some kind that plays out over the course of the show. Juan has family issues, Luke likes to hit the bottle and, of course, Mark might be just a little bit gay.

“It’s not really an issue,” Michael Jennings Mahoney said of his character’s sexual orientation. “One of the big messages in the show is acceptance of anyone. I don’t think anyone [in the show] really thinks that he’s gay. I don’t think he thinks of himself as being gay. He knows that he has strong feelings for Matthew but I don’t think he really understands them.”

That vagueness also carries over to the cast members, most of whom tiptoed around the issue of their own sexual orientation.

“I think it’s kind of null and void,” Mahoney said. “I think we’re all actors and we’re playing roles. Whether you’re playing straight or gay, it’s our job.”

“We can leave it up to the audience to decide,” Drennen added. “Let’s just say we’re in musical theater, so usually in the cast there’s a good number of gays.”

(Thanks for clearing that up, boys.)

Now that we’ve established who’s behind the scenes, it would be interesting to find out who’s in the audience, since the boy-band craze kind of fizzled out a few years ago (with no sign of making a comeback).

And then there are the hardcore fans of the show.

“We’re also expecting a small percentage of ‘Altar-holics,’ which are the fans that go to each production around the country,” said Lee Markham, who plays Luke. “They just follow the show around. There’s a whole fan base around for this show.”