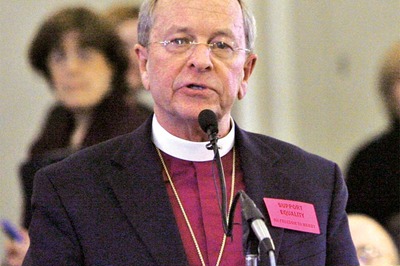 Demonstrating his inclusive politics, President-elect Barak Obama has asked Episcopal Bishop V. Gene Robinson, the denomination’s first gay bishop, to give the invocation at the opening celebration of the Presidential Inauguration on Jan. 18.

Additionally, Obama’s whistle-stop train tour — which departs tomorrow from Philadelphia en route to Washington, D.C., for the inauguration — will include an openly gay supporter and her partner.

Lisa Hazirjian, an out history professor at Case Western Reserve University in Cleveland, Ohio, and her partner were invited to join dozens of other “everyday Americans” for the trip to D.C. with the president-elect and his wife and Vice President-elect Joe Biden and his wife.

Of some 40 people accompanying the Obama and Biden families, Hazirjian and her partner are the only openly gay participants.

Hazirjian said that she and her partner, Michelle, were caught off-guard by the invitation, which came on New Year’s Eve.

“We got a phone call around dinnertime from someone with the inaugural committee extending an invitation to us on behalf of the president- and vice president-elect. We were incredibly surprised and excited,” she said. “We could not have imagined anything like this. It was a pretty cool way to ring in the New Year.”

In addition to riding the train to D.C. with Obama and Biden, Hazirjian and her partner were also invited to one of the several inaugural balls Jan. 20, which she said was a bit daunting at first.

“We were both a little anxious until we found dresses, but once we found our dresses and our shoes, now we’re fine,” she joked. “I think it’ll be a ton of fun.”

While Hazirjian said the invite was an honor, it was a deserved one, as she devoted countless hours to Obama’s presidential campaign. She first threw her support behind Obama as a member of his LGBT steering committee during the Ohio primaries. Last summer, she became the director of Cleveland’s branch of Obama Pride, the collection of the president-elect’s LGBT supporters.

“I was continuing the education I’d started on the steering committee about Obama’s very, very strong LGBT-rights stances, but I also started lining up people behind Obama and getting them plugged in with volunteer opportunities with the campaign,” she said.

Hazirjian said Ohio’s LGBT community came out in full force to support Obama and that in the days before the Nov. 4 election, about 400 LGBT- and ally-identified volunteers were working on behalf of the campaign just in Cleveland.

Hazirjian said she has always appreciated the historic nature of every presidential inauguration, but that this year in particular she has “a tremendous appreciation for all of the decades and even centuries of grassroots efforts by the black community to fulfill the promise of freedom in America.”

She said she’d like to discuss Obama’s ideas about grassroots organizing on the train ride, during which she was guaranteed some face time with the president- and vice president-elect, although she’s unsure if it will be one-on-one.

“One of the things that drew me to Obama as a candidate was his commitment not just to gay rights but to a whole different way of running his campaign, focusing on a grassroots involvement,” she said. “I’m interested in finding out more about what’s in store in terms of continuing to encourage participation across the country.”

Hazirjian said she also wants to address the issue of LGBT employment discrimination with the president-elect. She said that in the past she’s been turned down for positions after she expressed interest in obtaining benefits for her partner, but that she had no legal recourse because of a lack of federal LGBT-employment protection.

“This is a topic that’s very high on my own agenda and a piece of legislation that I think can really be passed through quickly with fewer obstacles than some other legislation,” she said.

Although Obama has pledged his support for a federal Employment Nondiscrimination Act and several other pro-LGBT bills, he drew the ire of many in the LGBT and ally communities when he chose the Rev. Rick Warren, who’s been an outspoken opponent of LGBT rights, to deliver the invocation at his inauguration next week.

Earlier this week, however, Obama announced that Robinson would give the invocation at the Lincoln Memorial Jan. 18, kicking off the inaugural events.

Robinson made headlines in 2003 when he was elected as the bishop of New Hampshire, which caused several parishes that opposed Robinson’s election to break away from the Episcopal Church.

“I am humbled and overjoyed at this invitation, and it will be my great honor to be there representing the Episcopal Church, the people of New Hampshire and all of us in the gay, lesbian, bisexual and transgender community,” Robinson wrote in an e-mail to Episcopal news site Episcopal Café.

Inauguration officials said Robinson was selected to deliver the invocation before the backlash erupted over Warren’s inclusion in the ceremonies.

In his e-mail, Robinson said he felt privileged to be included in the ceremonies.

“It will be an enormous honor to offer prayers for the country and the new president, standing on the holy ground where the ‘I Have a Dream’ speech was delivered by Dr. King, surrounded by the inspiring and reconciling words of Abraham Lincoln’s Gettysburg Address.”