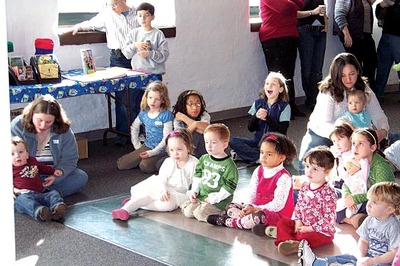 Although LGBT-headed families might have to overcome many more obstacles than their heterosexual counterparts, nonprofit Philadelphia Family Pride has successfully worked for the past 15 years to alleviate those challenges by heightening the visibility and cohesion of the local LGBT parenting community.

PFP celebrated its anniversary Jan. 1 during the organization’s annual New Year’s Day brunch, which drew a crowd of more than 100 parents and children. The organization hosted its first-ever silent auction during the event, which brought in more than $1,000 that will be used to fund PFP’s programs and services.

PFP, the only organization in the Philadelphia area that caters specifically to LGBT-headed families, was born in 1993 of a lesbian mothers’ group whose members were looking to expand their influence and more effectively unite local LGBT couples and their kids.

The organization staged its first public event the following spring when it hosted an educational forum during the 1994 Pride celebration. PFP became a member of the Gay and Lesbian Parents Coalition International, now known as the Family Equality Council, the same year. The organization established its bylaws in 1996 and, in 2000, became a 501 (c)(3) tax-exempt nonprofit.

Doug Metcalfe, chair of the PFP board, said the goals of the group haven’t changed much since its formation, although the organization has become more solid and directed.

“Currently our mission is building community for LGBT parents and their children in the Greater Philadelphia region through advocacy, education and family events; in the early days I’m not sure we really had as much of a strongly stated mission,” Metcalfe said. “It started out as a very social, informal group of parents coming together to support other LGBT parents and their families, and that’s still at the heart of what we do today. The general mission of the group hasn’t really changed all that much, but I think it’s probably been a bit more formalized in recent years.”

Metcalfe said PFP’s membership has continued to grow each year and now includes more than 200 member families from across Philadelphia, the surrounding suburbs and parts of New Jersey.

“We have a pretty wide draw and I think that’s definitely because of some of the programming that we offer,” Metcalfe said.

In addition to the annual New Year’s event, PFP also hosts a summertime picnic and a large Halloween party, as well as numerous smaller gatherings throughout the year. PFP partners with LGBT service organization Mountain Meadow to offer Family Zones during Pride, OutFest and Equality Forum’s Sunday OUT! as family-friendly safe spaces where LGBT parents can get to know one another and kids can partake in arts and crafts and games with other children from similar families.

The organization also offers several social groups for parents with children of different ages, such as one that stages playdates and events for families with infants and toddlers and another that plans outings for couples with pre-teens.

Metcalfe said the relationships that develop among members are PFP’s most valuable accomplishments.

“I think we’ve really done a great job of building a community for LGBT parents and our children. What I’ve seen in the organization are the bonds and friendships and get-togethers that happen outside of the organization based on the relationships that have been built by the families that come to our events and network and get to know one another.”

PFP has also taken on LGBT advocacy work as an active member of the Value All Families Coalition, a local group that is working toward marriage equality in Pennsylvania. PFP also seeks to assist and educate current and prospective LGBT parents through its annual parenting workshop at Equality Forum and its resource guide, which connects members with gay-friendly pediatricians, adoption centers and in-vitro-fertilization agencies.

PFP does, however, face challenges that many nonprofits must also deal with, such as a minimal staff capacity: PFP’s nine-member board is comprised of all volunteers, and the group has only one part-time paid staffer.

Metcalfe said that despite the organization’s limited personnel, PFP has made impressive strides in reaching out to and organizing the local LGBT parenting community.

“I think the biggest challenge the organization has been faced with for the course of the past 15 years is that we’re a volunteer-run organization. We don’t really have the budget or resources at this point for the organization to have a greater paid-staff complement. We’re all busy parents, with jobs, families, ballet and soccer practices and after-school events, and what we’ve been able to do despite that is tremendous.”