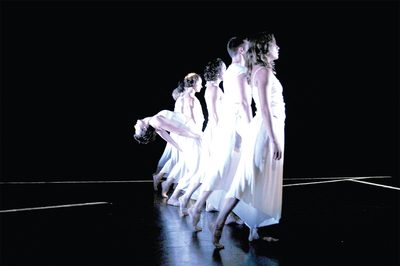 A Chorus Line The Kimmel Center’s Broadway Series presents the Tony Award-winning musical for everyone who’s ever had a dream and put it all on the line, through Jan. 4 at The Forrest Theatre, 1114 Walnut St.; (215) 923-1515.

Give My Regards to Broadway The Kimmel Center’s Broadway Series presents the story of how Broadway developed into a purely American art form, Jan. 8-Feb. 1 at Kimmel’s Innovation Studio, 260 S. Broad St.; (215) 893-1999.

Romance/Romance The Players Club of Swarthmore Theater presents the musical exploring the question of whether years of marriage can survive when flirtation threatens to become something more, Jan. 8-17, 614 Fairview Road, Swarthmore; (610) 328-4271.

Sleeping Beauty Storybook Musical Theatre presents an original musical adaptation of the Charles Parrault tale about a young princess who is cast into a hundred years’ sleep by an evil fairy and the prince that faces many ‘’thorny’’ problems in trying to rescue her, Jan. 6-10 at St. Joseph’s University’s Bluett Theater, 56th Street and Overbrook Avenue; (215) 659-8550.

AUDITIONS La Ronde (Reigen) The Living End Theatre Company is seeking male actors 21 and over for an all-male production of “Reigen” by Arthur Schnitzler in Philadelphia. Play will involve full nudity and physical contact. There is a modest performance stipend. Experience and training are welcome, but not essential. For information, e-mail [email protected] or call (302) 224-0598.

I Can’t Even Think Straight The Rehoboth Beach Film Society and Camp Rehoboth will co-sponsor a screening of the lesbian film as a part of the Women’s Weekend at 3 p.m. Jan. 3 at Movies at Midway, Route 1, Midway Shopping Center, Rehoboth Beach, Del.; (302) 645-9095.

Quiet Beauty: Silent Film Bryn Mawr Film Institute presents a four-week course that introduces students to silent film, a blanket term covering the period in cinema from the Lumieres’ Paris premiere in 1895 to the establishment of synchronized-sound feature films as the Hollywood standard in 1929, Jan. 6-27, 824 W. Lancaster Ave., Bryn Mawr; (610) 527-9898.

The Trojan War: Recent Excavations at Troy Dr. C. Brian Rose, deputy director at the Penn Museum, speaks about renewed excavations at Troy during the past 20 years that have focused on nine settlements from the beginning of the Bronze age (3000 B.C.) through the end of the Byzantine period (A.D. 1400), at 6 p.m. Jan. 7 at University of Pennsylvania Museum of Archaeology and Anthropology, 3260 South St.; (215) 898-4890.