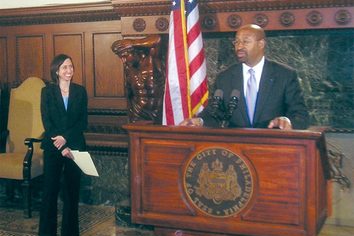 Casarez, who is a founding member of the Dyke March and the anti-poverty organization Empty the Shelters, stayed on with GALAEI, which she had headed for nine years, until July when she officially took on the position in the mayor’s office.

Casarez’s appointment marks the first time that the mayor’s LGBT liaison to the LGBT community is a salaried position that operates directly out of the mayor’s office.

Since her appointment, Casarez — often with Nutter at her side — has been a ubiquitous presence at LGBT community events, such as Pride and OutFest, and was one of the speakers at the Nov. 15 protest against Proposition 8 at City Hall.

Before Nutter created the mayor’s advisory board on LGBT affairs in September, Casarez spent several months identifying key community leaders and the mayor used her recommendations to form the coalition. Casarez chose local individuals who represent all facets of LGBT life to bring the diversity of the local LGBT community to city government.

Casarez has been a spokesperson both to and for the community, responding to all issues LGBT-specific and other, such as the mayor’s recent budget cuts, that could impact the local sexual-minority population, and bringing the concerns of the LGBT community to the city’s leaders.

Rue Landau, whom Mayor Nutter appointed as the executive director of the Philadelphia Human Relations Commission in June, has proven to be a strong voice for the community during her first six months at the helm of the organization.

Landau’s appointment marks the first time that a lesbian has headed the commission, which investigates discrimination complaints from city residents.

Since taking on the position, Landau, the former co-chair of Liberty City Democratic Club, has been at the forefront of the battle for expanded rights for the city’s LGBT residents.

Philadelphia passed its domestic-partner bill in 1998, allowing city workers and their same-sex partners to be eligible for the same benefits as heterosexual married couples, including an exemption from the real-estate transfer tax. But in 2004, the Pennsylvania Supreme Court ruled the transfer-tax exemption as unconstitutional.

Landau has spearheaded the effort to reinstate the transfer-tax benefit for domestic partners, working with city officials and community leaders to achieve parity for LGBT Philadelphians and ensure that the city strives to stay ahead of the curve in terms of LGBT rights.

Perry Monastero, the executive director of the LGBT grantmaking organization Delaware Valley Legacy Fund, has spearheaded numerous initiatives this year to raise the visibility of his organization as well as the entire Philadelphia-area LGBT community.

In 2008, DVLF launched several new grant programs, such as the Racial Equality Initiative, a three-year effort in conjunction with the Funders for Lesbian and Gay Issues that allowed DVLF to distribute tens of thousands of dollars to such organizations as AIDS Services in Asian Communities, The Womyn’s Village and Philadelphia Black Gay Pride. DVLF also launched its Straight Allies & Partners Initiative, which seeks to raise awareness of LGBT philanthropic opportunities among heterosexual allies.

In the past year, DVLF contributed more than $50,000 to local and regional LGBT organizations.

In light of the country’s economic woes, DVLF redoubled its efforts to reach out to potential donors. Last summer, an anonymous donor pledged $10,000 if the organization could raise twice that amount in June; Monastero and the group’s board members organized and met the donor’s challenge.

DVLF also used its name to bring recognition to other local LGBT groups, such as Equality Advocates of Pennsylvania’s start-up 501(c)(4) group Equality Action Pennsylvania, for which it hosted a kickoff breakfast to raise awareness about the new organization.

Monastero was influential in organizing DVLF’s November Platinum Day, which brought together about 300 members of the local LGBT and ally communities for financial workshops and discussions as well as the unveiling of DVLF’s new program, Wonder Women, which unites women from across the area to enhance their involvement in the local LGBT community.

When Nutter took office Jan. 7, 2008, the LGBT community was cautiously optimistic that he would follow through on his campaign pledge of operating an inclusive administration, a promise that he made good on.

Nutter named several openly gay officials to his administration, such as Donald Schwarz as deputy mayor of health and opportunity and health commissioner; Rue Landau as head of the Philadelphia Human Relations Commission; Gloria Casarez as the director of LGBT affairs; and Sam Sherman as chair of the Philadelphia Historical Commission.

Although former Mayor John Street had appointed Michael Hinson as his liaison to the LGBT community, Nutter’s appointment of Casarez marked the first time that the LGBT liaison was a salaried position that operated directly out of the mayor’s office.

In September, Nutter created an LGBT advisory board comprised of local community leaders to analyze issues facing LGBT residents and work with him on pinpointing viable solutions.

Nutter has also been a strong advocate for the LGBT community in the legal battle that was begun under Street’s administration to evict the local Boy Scouts chapter, the Cradle of Liberty Council, from its city-owned headquarters because of the organization’s antigay policies. Nutter has remained steadfast in his position that the city cannot continue to allow the group to remain rent-free in the building because the organization’s ban on openly gay members violates the city’s Fair Practices Ordinance.

Before stepping down as executive director of Equality Advocates of Pennsylvania in August, Stacey Sobel effectively worked to bring LGBT issues to the forefront in the state legislature.

Sobel, who spent seven years at the helm of the LGBT legal organization, was influential in facilitating hearings before the House State Government Committee on HB 1400, legislation that would have banned discrimination against LGBT people on a statewide level in public accommodations, employment and housing. Sobel spoke at the Philadelphia hearing, citing a poll commissioned by Equality Advocates that found a majority of Pennsylvanians supported the inclusion of sexual orientation and gender identity in the state’s nondiscrimination law. The bill did not make it out of committee.

Sobel was also a strong adversary of SB 1250, the Marriage Protection Amendment that would have amended Pennsylvania’s constitution to ban same-sex marriage and civil unions. Sobel lobbied lawmakers in Harrisburg and testified in opposition to the legislation at a hearing before the Senate Judiciary Committee. Sobel, the founder of Value All Families Coalition, also organized an SB 1250 protest at the State Capitol Building that drew hundreds of participants, and worked closely with a group of bipartisan legislators from both the House and Senate who defeated the bill.

Shortly before departing Equality Advocates, Sobel spearheaded the creation of the group’s Equality Action, a 501(c)(4) organization that has expanded lobbying power.