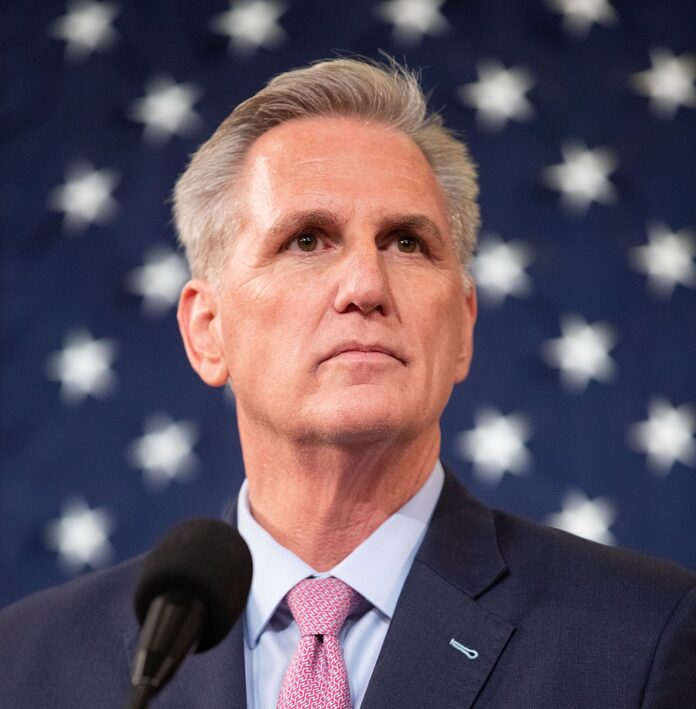 It was 1:04 a.m. Friday night when Kevin McCarthy finally won the Speakership after 15 ballots and a long battle with 20 far-right members of the GOP’s House Freedom Caucus. It was the first time since Reconstruction there had been so many ballots. Even on the final ballot, six of the holdouts, led by Matt Gaetz (R-FL) and Lauren Boebert (R-CO), refused to vote for McCarthy, voting “present” instead, which allowed McCarthy to garner the majority needed to win. McCarthy’s final total was 216 votes to 212 for Democratic Leader Hakeem Jeffries (D-NY), who had unified support throughout.

The long vote battle prompted one Twitter influencer to comment, “So after all that it turns out we DO negotiate with terrorists.”

McCarthy’s ascendancy is bad news for women and LGBTQ people and signals that the next two years will see no passage of bills in support of either group and likely passage of bills that will negatively impact them.  McCarthy has been in the House for 16 years and has a history of anti-LGBTQ and misogynist stances. He is staunchly anti-abortion and also opposed to same-sex marriage. McCarthy has voted to strip about $500 million in federal funding for Planned Parenthood, which impacts both women and LGBTQ people, and he also supports the Hyde Amendment and opposes any federal funding for abortion.

McCarthy was a supporter of the Defense of Marriage Act (DOMA). After President Obama instructed the Justice Department not to defend the law in court, McCarthy supported House Republicans’ legal defense of the law. When the DOMA case reached the Supreme Court in 2013, McCarthy joined then-Speaker John Boehner and House Majority Leader Eric Cantor in an amicus brief supporting DOMA.

Last month McCarthy voted against the bipartisan Respect for Marriage Act and has previously voted against the Equality Act twice. McCarthy also refused to support the Do No Harm Act, which clarifies that the Religious Freedom Restoration Act (RFRA) is intended to protect religious freedom without allowing the infliction of harm on other people, notably LGBTQ people.

“Religious liberty” has been at the center of various legal challenges that have made it to the U.S. Supreme Court, like last month’s 303 Creative LLC v. Aubrey Elenis case, that pits the civil rights of LGBTQ people against religious freedoms.

As House Majority Leader, McCarthy also led efforts to repeal the Patient Protection and Affordable Care Act (ACA or Obamacare). In July 2022, McCarthy supported a GOP bill that would block federal funding to colleges where trans women are allowed to participate in sports with cisgender women. A separate bill would allow transgender people to sue medical personnel who helped them transition as minors.

This history highlights how problematic McCarthy will be. The week-long fight to be elected Speaker was unprecedented and marked an ignominious and fraught first week of the new 118th Congress, which wasn’t sworn in until nearly 2 a.m. Saturday morning. There was even a physical altercation on the floor of the House between Gaetz, Rep. Mike Rogers (R-AL) and McCarthy in which Rogers had to be restrained from assaulting Gaetz. For a party claiming their narrow majority was a mandate from the American people, it was anything but a unified front.

McCarthy’s acceptance speech, which followed a rousing alphabet of Democratic wins over Republican failures by House Minority Leader Jeffries, was a series of contradictions. After saying he would always put the country first, McCarthy laid out what he would prioritize as Speaker. He said that he and his party were committed to a “future that’s built on freedom. Where children come first and are taught to dream big — because in America, dreams can still come true. A commitment for a government that is held accountable.”

He did not mean Donald Trump and January 6th insurrectionists, though, because immediately after the House adjourned, he was telling reporters that Trump was owed a debt of thanks, saying, “I do want to especially thank President Trump. I don’t think anybody should doubt his influence. He was with me from the beginning… he was all in.”

In his acceptance speech, McCarthy asserted, “We believe government should be there to help you, not go after you. We’re gonna pass bills to fix the nation’s challenges from wide open southern borders to America-last energy policies to woke indoctrination in our schools.”

That last point is LGBTQ people. McCarthy holds the current GOP stance that kids are being “groomed” to be LGBTQ in schools, which has led to a spate of anti-LGBTQ GOP-led legislation in state legislatures. LGBTQ advocates are concerned that McCarthy’s close relationship with Marjorie Taylor Greene (R-GA) might lead him to support Greene’s proposed bill, the “Protect Children’s Innocence Act.” The bill makes it a felony to perform any gender affirming care on a minor and it permits a minor on whom such care is performed to bring a civil action against each individual who provided the care.

On Jan. 11, the House is expected to vote on two abortion-related measures that now have a real chance of passage under McCarthy’s aegis. One bill would “condemn attacks on pro-life facilities, groups, and churches.” The second bill demands that medical practitioners save the lives of any baby who survives a late stage abortion, nearly all of which are conducted because of fetal anomalies or to protect the health of the mother. The “born-alive” measure is extremely controversial.

While neither bill will likely move forward to the Senate, that the bills are coming to the floor signals that the tone has shifted from the Pelosi era to the McCarthy era. These bills are being put forward on the same day that Alabama’s Republican attorney general says women could be prosecuted over abortion pills.

Anti-abortion activist groups sent a letter to McCarthy and House GOP lawmakers urging them to “pursue a robust pro-life agenda” and take stronger action against abortion, including passing a national six-week abortion ban and banning interstate delivery of abortion pills.

“We learned nothing from the midterms if this is how we’re going to operate in the first week. Millions of women across the board were angry over overturning Roe v. Wade.” said Rep. Nancy Mace (R-SC) about the House’s anti-abortion votes, saying there should be a “balance between protecting women’s rights and the right to life,” but “what we’re doing this week is paying lip service to life.”

In his acceptance speech McCarthy promised transparency and that the actions of Congress would be witnessed. “The debates will be open for you to witness what happens in the People’s House.” But C-SPAN tweeted, “NOTE: C-SPAN cameras are no longer in the House chamber. We have resumed using the feed from House/government-operated cameras.”

C-SPAN sent a letter to McCarthy requesting the cameras be allowed in the House chamber. McCarthy did not respond. The transparency McCarthy promised has ended before it began.