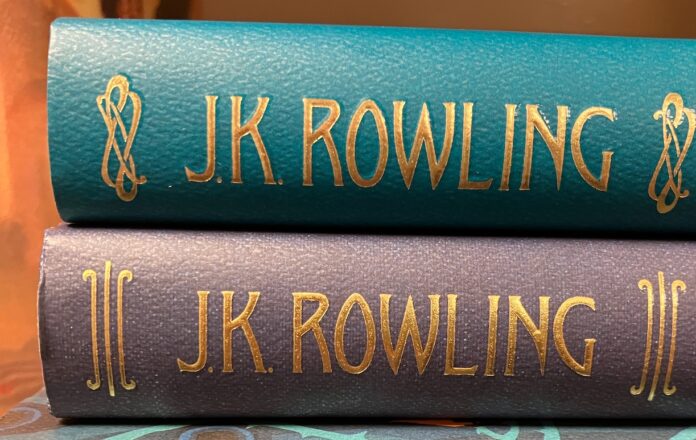 A few weeks ago in England, during a discussion at the Cheltenham Literature Festival between journalist Mariella Frostrup and talk show host Graham Norton, Frostrup brought up J.K. Rowling as an example where “cancel culture” may go a step too far.

“For example, J.K. Rowling, then,” Frostrup said. “That’s harder to make a point with, isn’t it, when you look at someone expressing what may or may not be popular opinions, to be deluged with anger, rage, and attempts at censorship, seems to me something more than just a middle aged man kind of not being able to say something he used to say in the days of empire.”

Lengthy side note: Rowling’s posts on Twitter often question whether trans women are real women. She complains about language like “people who menstruate” and has written that if she were born thirty years later, she may have “tried to transition” because “The allure of escaping womanhood would have been huge.” Many of the stars of the Harry Potter film franchise have spoken out against Rowling. Numerous outlets, including Politico, have written extensively about her fraught relationship with the trans community and those who support them. Rowling has many detractors, but she has also garnered allies who feel similarly to her about trans issues.

During Frostrup/Norton’s discussion, after Frostrup suggested that the criticism Rowling endures may be more than just “cancel culture,” Graham Norton replied: “All I’m painfully aware of is that my voice adds nothing to that discussion. And I’m sort of embarrassed that I’m somehow drawn into it… if people want to shine a light on those issues, and I hope people do, then talk to trans people, talk to the parents of trans kids, talk to doctors, talk to psychiatrists. Talk to someone who can illuminate this in some way. You know, I’m very aware that as bloke off the telly, you know, your voice can be artificially amplified. And once in a blue moon that can be good, but most of the time, it’s just a distraction… Graham Norton shouldn’t be in your headline. If you want to talk about something, talk about the thing. You don’t need to attach a Kardashian or whatever to a serious subject. The subject should be enough in itself.”

Sounds logical enough, right? Kudos to Graham Norton for telling people to get information on the trans community from trans people rather than celebrities with huge follower counts. How many people might believe, wrongly, that people want to transition just to “escape womanhood,” as Rowling put it? The voice of a celebrity should be used carefully. Norton has the right idea. But not according to Rowling.

After Norton’s remarks were applauded by British songwriter Billy Bragg, Rowling tweeted “Very much enjoying the recent spate of bearded men stepping confidently onto their soapboxes to define what a woman is and throw their support behind rape and death threats to those who dare disagree. You may mock, but takes real bravery to come out as an Old Testament prophet.”

For context, J.K. Rowling does receive messages on social media from people who are angry about her views on the trans community. She has received death threats which are horrible and should be investigated by the relevant authorities. But Norton did not “throw support” behind the threats that Rowling received, as she insinuated in her tweet. He didn’t comment on them at all. He said the trans community should be listened to. He tried to not get drawn into the social media skirmish. Sadly, he was unsuccessful.

A few days after Rowling wrote that tweet, Norton’s Twitter account was deleted. And for anyone who pays attention to Rowling’s continual online quarrels, it was immediately obvious why Norton exited the platform.

Rowling often tweets about — and thus draws attention to — people who talk about her. Sometimes Rowling’s responses are for specific reasons, such as when she defends herself from people who libel her. But regardless of the reason why, every time she tweets about someone brings a huge amount of publicity to that person. And if that person is perceived as in any way denigrating Rowling, her fans (as I described above) launch into online harassment mode.

The day after Rowling tweeted about him, Norton most likely, though we’ll never know for sure, woke up to a deluge of Twitter replies and messages disparaging him. He also had some British media and celebrities criticize him for not defending Rowling. It’s reasonable to assume that rather than endure such strife, he deleted his Twitter account. He should not have had to do that. But that’s what happens when a person who is revered so widely, a person who is seen without fault, and a person who has 14 million Twitter followers signals to their devoted fanbase that someone is against them. That fanbase, whether Rowling wants them to or not, will go into attack mode. They won’t care that rather than shun Rowling like many celebrities, Norton actually hosted her on his radio show in August to talk about her book. They won’t listen to the full exchange between Norton and Frostrup. All they’ll see if that Rowling spoke against him. That’s all it takes for a social media pile on.

Graham Norton’s words about the trans community and trans issues should be repeated far and wide. If you want to learn about trans people and the issues they go through, learn from trans people themselves. If you want to know about the process of transitioning, learn from people who have been through it and the experts who understand it. If you want to learn about how trans people are truly being treated in society, learn directly from them. Anything else will not give you an accurate understanding. Anything else will merely perpetuate myths, and that will always be dangerous.