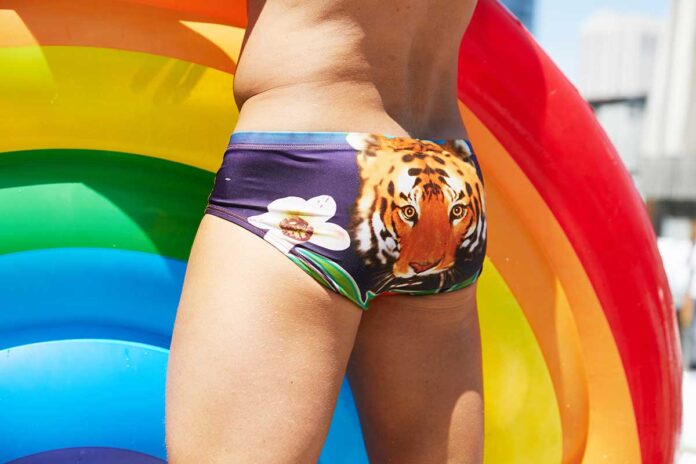 I came across an article published in The Atlantic by Spencer Kornhaber, who covers pop culture for the magazine. In June he took on the issue of Pride, with an article titled, get ready for it: “The Generational Clash at Pride Is Actually a Sign of Progress: The kink-at-Pride debate shows that the queer movement has grown in exactly the way it should.”

The point he makes is that there is a yet another generational war going on among queer people about sex and representation at Pride. Apparently some teenagers and young adults have complained that celebrations of LGBTQ Pride are too raunchy and that they “did not consent” to such. While the mainstream festivities have often been criticized as tame and conciliatory, some in the younger generation want them even tamer and more conciliatory.

From that point the author is all over the map on the issue, but he does remind us of one major point: sex is what the heterosexual world used to keep us in our place by laws and social norms. In a way, the older generation — as it seems the author sees it — wanted to reclaim their sexuality in Pride celebrations similar to the younger generation wanting to reclaim the word queer. He doesn’t connect the two; especially that they are both political in nature and that the both are/were meant to shock the hertonormative society.

Here’s the ugly truth. Like so much about Pride, Gen Z, with all its complaints, are so self centered that they don’t see their own agism. Even sadder is that they don’t know nor care to know their community’s history.

It was brave of us to do Pride in 1970, something many of today’s Gen Z armchair pundits wouldn’t have the nerve to do. Those heroes whose histories they have distorted — such as Marsha P. Johnson, Sylvia Rivera or any of us in Christopher Street Liberation Day Committee or Gay Liberation Front — never wore anything in that first NY March that was risky, unless you think drag is raunchy. Gen Z needs to do its homework. There’s actually film of that very first march. Yes, there were a few people in that first march who might have been dressed risque, but we were not the moral police. But in today’s parades there are entire floats with Gen Z’s hanging off poles in thongs sponsored by liquor companies. (And let’s leave San Francisco out of this discussion, since some San Francisco events have always had a different level of appropriateness than the rest of the country.)

Note the difference I make between marches and parades. Gen Z has parades because of our marches. The marches we created out of nothing. As to the raunchy point, I’ve seen the tweets, and the people who want pride to be less raunchy almost have me in agreement, until they make it self centered on only their generation being victimized by the raunchiness and stating it’s the Boomers’ fault.

Gen Z: the agism here is so blatant, the stereotyping of an entire generation, the generation that gave you Pride. Raunchiness has always been a part of some Prides. It is not a generalizational issue. Actually, it’s a discussion that most in our community do not wish to have. Stop attempting to be a victim, stop revising history, and have a serious discussion with the community about what Pride should be. We did that. Have you even tried to ask us still here what it meant to us? Talking about reimagining Pride and taking it back to its roots while ignoring those who created it is the height of agism.

But there is an answer to the question about whether Pride is too raunchy. Since we’re over the whole shocking the heterosexual world by now, maybe it’s time to stop oversexualizing ourselves? Here’s the history you don’t know. That first march was to commemorate Stonewall, the beginning of a new more radical movement. It was to commemorate what we had achieved in one short year: creating a community where there was none before. And marching with Pride out of the village through a city as a community for the first time, it was not at all about raunch. What about today’s Gen Z-led Parades?