While you wait for that “Call Me By Your Name” sequel that may or may not ever happen, Luca Guadagnino is lining up another collaboration with Timothée Chalamet. The project is called “Bones & All,” written by Dave Kajganich (“A Bigger Splash,” “Suspiria”) with Guadagnino directing. Under super-secret wraps at the moment, it’s being referred to as a horror-love story, and those lovers look to be Chalamet and up-and-comer Taylor Russell. She starred in the indie drama “Waves” and in the Netflix reboot of “Lost in Space,” both of which earned her critical acclaim. It’s all still in the talks stage right now, no production dates are set, and no other casting has been discussed, so this is one to put on your 2022/23 calendar. In the meantime, for all we know, that wait period might involve Guadagnino independently fast tracking the “CMBYN” sequel, shooting it over a weekend and dropping it by surprise on HBO Max. We wouldn’t complain.

Luke Evans and Tom Hanks pull no strings in Pinocchio

There’s yet another “Pinocchio” on the way. You remember it, right? The 1940 classic Disney animated film, the story of a wooden puppet who longs to be a real boy? Well, after the strange debacle of Roberto Benigni’s live-action version, and then a 2019 version that somehow also starred Roberto Benigni, Robert Zemeckis (“Back to The Future”) has a live-action take in the works for Disney+. Tom Hanks stars as Geppetto in this one, and now Luke Evans (Gaston in “Beauty and the Beast”) has joined the cast, as well. Evans is a busy one these days, starring in “Crisis” opposite Gary Oldman, and the Hulu series “Nine Perfect Strangers” opposite Melissa McCarthy and Nicole Kidman. He’ll play The Coachman here, perhaps opposite an animated Pinocchio (we assume anyway, if we can glean anything from Zemeckis’ tech-obsessed output over the years). But the question remains: will Benigni be offered a role? That man needs a hat-trick.

One of our favorite movies of 2020, Isabel Sandoval’s “Lingua Franca” (you can still watch it on Netflix), brought the trans Filipina filmmaker’s work to a wider audience after her previous films “Senorita” and “Apparition.” And now she’s back with a follow-up feature, “Tropical Gothic.” The premise sounds ambitious and suggestive of a happily larger budget: A surrealist drama set in the 16th century, it involves a Spanish conquistador who finds himself haunted in the Phillippine islands. In other words, exactly the sort of colonizer comeuppance tale we want from popular culture. Sandoval is heading to the European Film Market at the Berlin Film Festival with the title for those all important production money meetings and promises of sales to non-U.S. markets. In the meantime we’ll settle in and wait for this promised ghost story to revise history sometime in the future.

It’s taking forever, this resurrection of the classic ’80s fashion/sex/murder mystery/sunshine-noir “American Gigolo,” but we’re committed to seeing it through to its destination as a series on Showtime. Maybe it’s because Richard Gere taught us about Giorgio Armani and male frontal nudity in 1980, or maybe it’s because we’re still addicted to that film’s homoeroticism and simultaneous homo-fear. Whatever the case, there’s a casting update, as Lizzie Brocheré (“Falling Water”) and Gabriel LaBelle (“Dead Shack”) are joining as regulars alongside Jon Bernthal, Gretchen Mol and Rosie O’Donnell. Coming 40 years after the original yet only spanning an extra 18 (huh?), the story continues as formerly in-demand sex worker Julian (Bernthal), whose life was never the same after being accused of murder, tries to find his way in the world of contemporary gigolo-ing. They’re still adding cast, as you can see, so cameras haven’t rolled yet. But they should, and soon, because we’re impatient. But while they’re taking their sweet time making this thing happen, could someone put a call in to Gere, Lauren Hutton or Debbie Harry for some throwback cameo appearance/soundtrack love? At this point, why not? 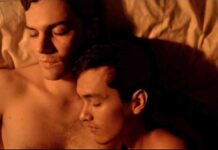