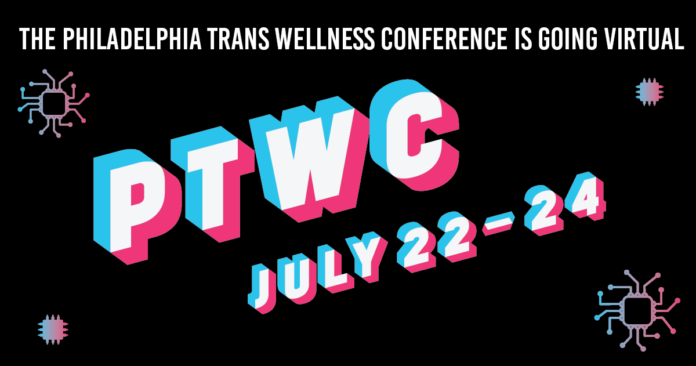 Mazzoni Center’s 2021 Philadelphia Trans Wellness Conference (PTWC) will be held virtually due to the evolving COVID-19 pandemic. The Pennsylvania Convention Center has been home to the conference for over a decade, providing a space for experts and attendees to foster community and education regarding transgender health. This year’s conference will take place from July 22 to 24.

“We know this is disappointing,” PTWC Logistics Coordinator Dani Murano-Kinney said in a press release. “We know that for many, the conference itself as a space represents community, unity, and connection, and for some folks it may be the only space such experiences can be held throughout the year.”

The largest transgender health conference world-wide, PTWC serves to educate members of the trans community, healthcare workers and intersections thereof, about physical and mental health issues facing trans communities. The conference consists of two tracks — a free general track open to the public, and a paid professional track comprised of a continuing education program centered on clinical teachings and cultural competency for wellness professionals who treat trans and gender nonbinary patients. The professional track provides medical, behavioral and legal areas of focus. Gender-affirmation surgery, reproductive health, the need for trans-competent mental health providers and police brutality toward trans individuals were topics of panels and workshops from the 2019 conference.

The phased rollout of the Covid-19 vaccine means that there is still significant risk of community transmission in Philadelphia, other U.S. cities, and other countries. Philadelphia health professionals are currently vaccinating a select group of individuals, including patient-facing healthcare workers, frontline and essential workers, people living and working in congregant settings, people 75 and older and those with medical conditions that elevate their risk. The vaccine is not slated to be available to the general population for several months.

“A conference with such a high level of international participation and attendance exponentially creates numerous health and safety risks, drawing folks to airports, to hotels, to public transportation, to the convention center, to restaurants,” Murano-Kinney said in the release. “It felt irresponsible of us to create so many vectors to spread the virus for attendees.”

In a press release, Mazzoni Center spokesperson Larry Benjamin thanked PTWC sponsors Le Meridien, The Notary hotels, the Pennsylvania Convention Center and Cvent for their willingness to work with conference staff to move the event to a virtual platform.

Charlene Arcila, a trans woman of color who carried out advocacy and activism work in the trans, HIV/AIDS, recovery and faith communities, initially created the conference in 1991 as a single day event to promote community and education surrounding trans issues. Arcila worked for the Philadelphia AIDS Consortium for over 20 years, and played an instrumental role in the legal removal of the discriminatory gender markers on SEPTA’s transit passes, which led to the founding of the organization Riders Against Gender Exclusion (RAGE). She passed away in 2015.

In a statement on the PTWC website, Murano-Kinney, relatively new to the position, recognized that the conference leadership in recent years has failed to reflect the communities that the event initially intended to serve.

“I recognize that there is greater work to be done on our part to rebuild trust with the community, and to begin the work to bring the community into a position of agency in defining the content of the conference,” Murano-Kinney said in the statement. “In doing so, the conference aims to recognize that expertise surrounding the health and well being of the trans community cannot be granted to out of paternalistic and gatekeeping gestures from cis-lead organizations and professionals and must rise from within the community, as we are the most qualified to say what it is that benefits and serves our community.”

They also acknowledged that the pro track of the conference previously received fewer submissions from trans professionals “due to the barriers, discrimination, and gatekeeping that often prevent members of the trans community from pursuing careers in medical, legal, and/or behavioral health industries,” they said in the statement. “Moving forward, I’ll be investigating ways to proactively remedy this problem.”

Workshop proposals for the general and professional conference tracks can be submitted at the following links, respectively: http://bit.ly/gentrack21 ; http://bit.ly/protrack21. More information about the PTWC can be found here.