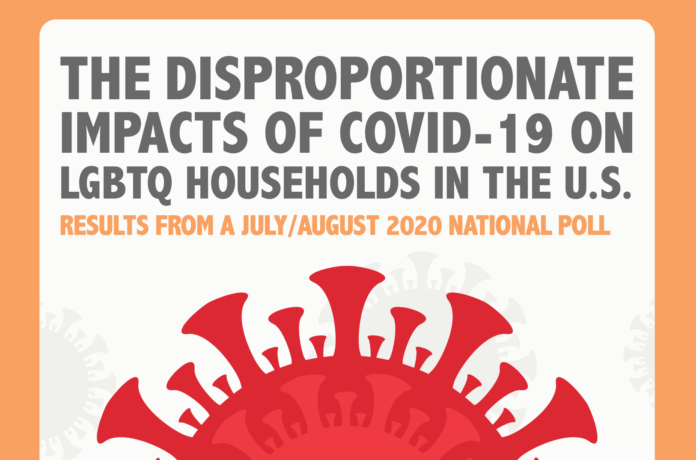 A new report from the Movement Advancement Project, which compiled the data and presented the report based on polling data. shows that LGBTQ households — especially those headed by Black and Latinx LGBTQ people — experienced disproportionate, negative impacts as a result of the COVID-19 pandemic. This includes being twice as likely to be unable to get necessary medical care and four times more likely to not have enough food to eat as non-LGBTQ households.

Founded in 2006, the Movement Advancement Project (MAP) is an independent, nonprofit think tank that provides rigorous research, insight and communications that help speed equality and opportunity for all. MAP regularly addresses LGBTQ issues.

This latest report, The Disproportionate Impacts of COVID-19 on LGBTQ Households in the U.S., presents new findings and analysis of the nationally representative survey conducted by the Harvard T.H. Chan School of Public Health, NPR and the Robert Wood Johnson Foundation.

The report shows that, as a direct result of the pandemic, LGBTQ households experienced higher rates of job losses, serious financial problems, issues accessing health care and increased challenges navigating at-home learning for their children, as compared to non-LGBTQ households.

These disparities are heightened for Black, Latinx and low-income LGBTQ people, reflecting broader national trends of who has been especially impacted by the pandemic.

“The pandemic has disrupted life for all of us. Yet, some communities have borne the brunt: Black and Latinx people, low-income people, and, as this new data show, LGBTQ people. Decades of discrimination on the job, in health care, and beyond, combined with uneven legal protections around the country make LGBTQ people more vulnerable to pandemic-related instability and insecurity, with an even more devastating impact on LGBTQ people of color,” said Ineke Mushovic, Executive Director at MAP.

The report delves into a range of issues impacting LGBTQ people over the course of the pandemic. Higher rates of job losses created more economic uncertainty for LGBTQ people.

The report notes that since the pandemic began, nearly two-thirds (64%) of LGBTQ people and their families experienced a job loss or disruption, compared to just under half (45%) of non-LGBTQ households. PGN has interviewed members of the community since the early days of the pandemic. Many LGBTQ people work in the restaurant and bar industries, retail and entertainment, all of which are jobs severely impacted by the shutdowns. These MAP numbers are reflective of that fact.

The numbers were worse for Latinx LGBTQ households–71% experienced loss of a job or other employment disruption.

MAP concluded that “Since LGBTQ people have a higher rate of employment discrimination overall, they may struggle to find new jobs as a result of these job losses.”

Greater economic insecurity and upheaval for LGBTQ people was notable, compared with their non-LGBTQ peers. Two-thirds (66%) of LGBTQ households had at least one serious financial problem since the pandemic began, compared to less than half (44%) of non-LGBTQ households.

Most glaring of all the findings on economic issues was that nearly one in five (19%) of LGBTQ households reported that they were not getting enough food to eat every day, compared to only 5% of non-LGBTQ households. PGN has reported on local food insecurity, including at Thanksgiving.

In the midst of the pandemic, MAP found that LGBTQ people had significant problems accessing health care. Twice as many LGBTQ households (38%) have been unable to get needed medical care or delayed getting medical care for a serious issue, compared to 19% of non-LGBTQ households.

One-quarter (25%) of LGBTQ households were unable to get prescription drugs, or delayed doing so, for a major health issue during the pandemic, compared to only 8% of non-LGBTQ people.

While most Americans felt the brunt of isolation brought about by extended shutdowns and other factors of the pandemic, MAP found LGBTQ people were severely impacted. As PGN has been reporting throughout the pandemic, LGBTQ people have experienced greater social isolation than non-LGBTQ people. PGN found this to be most acute among people under 25 and those over 60.

MAP’s study shows 44% of LGBTQ households reported serious problems coping with social and physical isolation during the pandemic, compared to 23% of non-LGBTQ households.

The MAP report states, “Since LGBTQ people are more likely to live alone and to lack an extended family network they can turn to for support, this can leave them particularly vulnerable because they may have no one to count on to pick up groceries or prescriptions, to check on them, or to provide vital social connection.”

Logan Casey, Policy Researcher at MAP and an author of the report said, “It’s clear that COVID-19 has amplified and exacerbated disparities that existed before the pandemic. LGBTQ people were more likely to struggle with economic stability and have challenges with access to health care prior to COVID, and that’s even more true now.”

Casey said, “The existing patchwork of legal protections is insufficient, which is why we need a nationwide law like the Equality Act, so that LGBTQ people in every community are protected from discrimination.”

The survey was conducted in July and August of 2020 by NPR, The Robert Wood Johnson Foundation and the Harvard T.H. Chan School of Public Health (NPR/RWJF/Harvard). The survey was part of a polling series to examine the impact of COVID-19 on households in the United States. MAP culled and compiled the data and released it last week.

According to MAP, “These findings illustrate the severity of COVID’s impact on LGBTQ households several months ago, before the current spike in cases and deaths. As the pandemic both continues and worsens, LGBTQ people and their families will likely continue to face stark, and disproportionate, impacts on their economic security and their physical and mental health.”