While this country has been paralyzed by both the pandemic and the political circus we call the 2020 election (led by the lead clown Donald Trump) the LGBT movement towards equality goes on.

In China, the annual Gay Pride in Shanghai has been cancelled by the government, but the LGBT movement there has continued to fight for freedom in a number of ways, including taking the system to court for marriage equality. A lesbian couple actually took to the courts over a desolation of their marriage from another country and the custody of their child while a student took her university to task for using outdated and homophobic text.

In Hungary, the right wing government has begun to crackdown on its trans community.  The trans community is fighting back in creative terms like placing trans flags on public buildings.

The LGBT Film Festival in St. Petersburg, Russia was raided; police and health officials cleared out the building while Putin’s government is considering a ban on Gay Pride parades. Activists protested by calling snap demonstrations and zoom meetings to spread awareness.

On brighter news, Bangladesh made history by becoming the first nation to open a Islamic college for transgendered muslims. Angola decriminalized LGBT sex, something that happened in the U.S not that long ago, in 2003. And Norway banned hate speech against bisexuals and trans people.

Here at home, last years’s debate over Hallmark’s reaction to a lesbian commercial and lack of LGBT representation with their holiday rom-com’s has led to a slew of holiday LGBT films on Lifetime, Netflix, Paramount channel and yes even the once-puritanical Hallmark.

And right in our own backyard, organizations are finding ways to keep the community connected while we self-isolate.

Nothing can stop our march to equality, not a pandemic, not a right wing government, and certainly not Donald Trump. 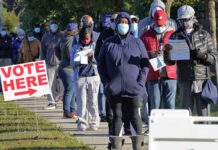