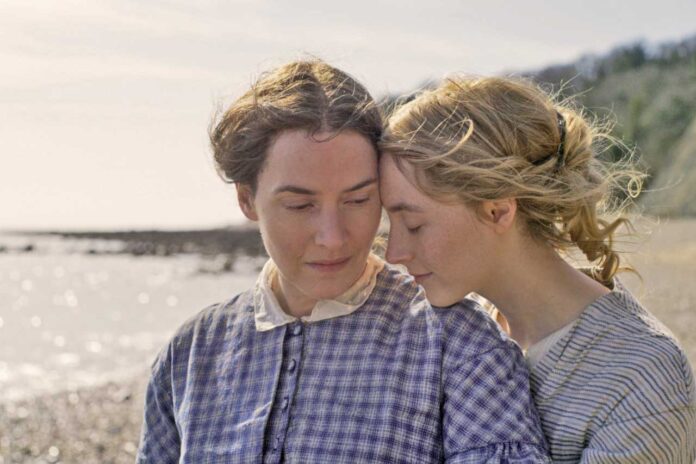 “Ammonite,” by out gay writer/director Frances Lee, depicts the unlikely romance that develops between Mary Anning (Kate Winslet), a fossilist, and Charlotte Murchison (Saoirse Ronan), a society lady who is cared for by Mary, in Lyme Regis, England, in the 1840s.

The film, which opens at the Landmark Ritz on November 13, is based on real people but is not a biopic. Instead, Lee creates a drama based on historical facts and women’s roles in a patriarchal, class-based society. What emerges is an empowering story of unexpected love and its transformative effect on both Mary and Charlotte.

In a recent interview via WhatsApp, Lee spoke about his touching romantic drama.

Where did you learn about Mary, and what prompted you to tell her story?

I came across Mary not long after I finished the rounds with “God’s Own Country,” and it was by chance. I was Googling fossils and her name kept coming up. I read about her, and what struck me was her position in society as a working-class woman born into poverty with no class mobility for her. I was struck that it was through her own determination and natural ability and hard work that she became the leading paleontologist of her generation. I was fascinated by the disadvantage she was born into and how she worked through that. I was more fascinated that she was totally overlooked at the time. She wasn’t credited for her finds; they were re-appropriated to the men who bought them. I was battling against the system to become a filmmaker, and I saw that parallel in Mary’s life. I am also fascinated by intimate human relations and how we interact within those relationships. I wanted to look at a relationship in this context.

Speaking of intimate relationships, I appreciate that you tell same-sex love stories and don’t shy away from being graphic. You even include an unexpected full-frontal male nudity in a lesbian romance! What decisions did you make about the passionate sex scenes?

It’s interesting to hear the words that are used to describe the same-sex intimate scenes. I don’t think they are sexually graphic in terms of what you see in heterosexual cinema. But with these characters, it’s very much about us as an audience staying with them and going through this experience with them. In the intimate scenes, we see an emotional shift in their dynamic and it tells us so much about them. It’s just another storytelling tool, like dialogue. It was important to include it. To go back to the penis, I wanted to play with the patriarchy and the power of the phallus, and there were references to the impotent phallus. That’s why it’s included.

Both “God’s Own Country,” and now “Ammonite,” are set in harsh landscapes where love thaws stubborn characters. Can you talk about the power of love?

It’s something I do obsess about. My films are very, very personal, and I write from a personal perspective. I play out scenarios, experiences, thoughts, and feelings through these stories and characters to figure stuff out for myself and hopefully create something other people find resonance in and can relate to. This film is about loneliness and loss, and every character is dealing with some kind of loss. Dealing with that, you put shutters up, and retreat. You are too vulnerable or scared to reach out, and I guess I believe in that sense when the right two people come together you can be changed, and there is lots of growth to be done in relationships and human interactions, and the best relationships allow for that growth and those changes.

You create a palpable sense of place that informs the narrative.  What observations do you have about the use of space in “Ammonite”?

Texture is really important to me. In film, you can’t touch it, but space and texture are super important. In this film, I was fascinated by the interior and exterior spaces as Mary experiences them. It’s dark and cold and she can’t afford candles or lamp oil in her home, but the beaches are cold and rough and wet and dirty, but she’s on her own and has freedom and as close to a spiritual experience as you can have there. I love the way landscapes inform characters emotionally and physically, and how they are born out of their landscape. Elizabeth’s incredible garden shows how she had time to create it. Mary has no garden. I like exploring that — how Mary, in Lyme Regis, feels stuck on the edge of the row of shops whereas in London, Charlotte’s house is so colorful and full of nice things. The interiors are [revealing] spaces. The texture thing is important to me. With every film, I start a scrapbook and that’s full of materials and things that give you a physical sensation.

Deep Inside Hollywood: Chalamet and Guadagnino finally get it together