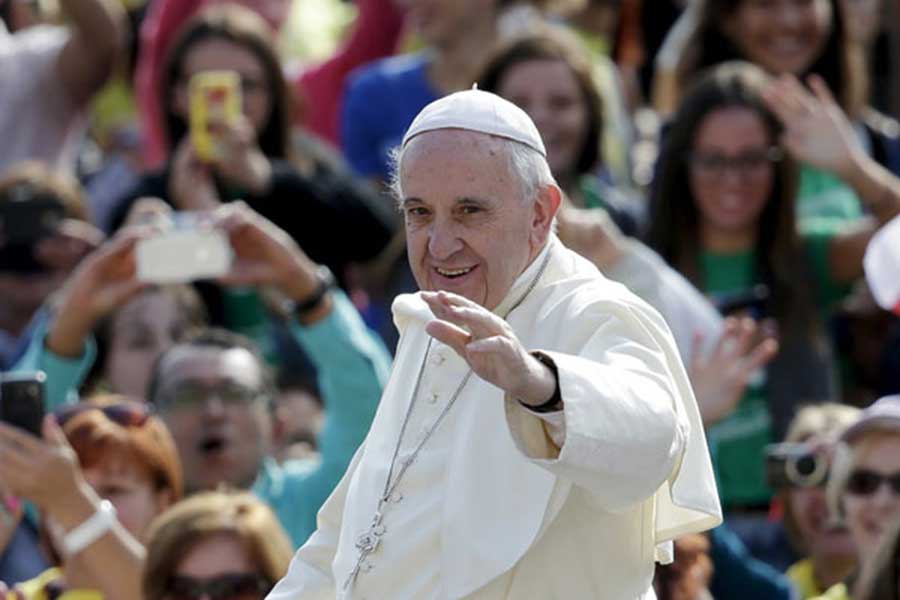 In a new documentary that premiered October 21 in Rome, Pope Francis called for the passage of civil union laws for same-sex couples. This is a radical shift in stance from the position held for years by the Vatican’s doctrinal office. Previous popes — particularly Francis’s immediate predecessors, Popes Benedict XVI and John Paul II, both staunchly anti-gay — have been unmoved on the issue of same-sex unions of any kind.

The film, Francesco, sees Pope Francis speaking at length about pastoral care — a form of emotional, social and spiritual support — for LGBT people.

“Homosexuals have a right to be a part of the family,” Pope Francis said. “They’re children of God and have a right to a family. Nobody should be thrown out, or be made miserable because of it.” The pope then added a declarative statement on civil unions for same-sex couples.

“What we have to create is a civil union law. That way they are legally covered,” he said.

Oscar nominated filmmaker Evgeny Afineevsky, who lives in the U.S., told Catholic News Agency that the pope made his call for civil unions during interviews Afineevsky conducted with him for the film.

In 2010, during his time as Archbishop of Buenos Aires, Pope Francis opposed efforts to legalize same-sex marriage but privately endorsed civil unions for gay couples as an alternative to same-sex marriages. He had never come out publicly in favor of civil unions as pope prior to his statements in the documentary.

Francesco premiered Oct. 21 as part of the Rome Film Festival. The documentary will premiere in the U.S. on Oct. 25. The film focuses on social issues like LGBT Catholics and on pastoral ministry among those who live, as Pope Francis says, “on the existential peripheries.”

The documentary highlights the pontiff’s advocacy for migrants and refugees, the poor, the priest sexual abuse scandal, women’s role in society, and the response of Catholics and others toward those who identify as LGBT.

One story included in the film is that of a gay Italian couple with three adopted children. Pope Francis says in the film that he urged the men to raise their children in their parish church.

One of the men, Andrea Rubera, said that Pope Francis’s encouragement was “greatly beneficial to his children.”

“He didn’t mention what was his opinion on my family. Probably he’s following the doctrine on this point,” Rubera said.

Rubera said he sent a letter to the pope detailing how the couple wanted to bring their children up as Catholics in the local parish, but had concerns about how they would be treated. Pope Francis called Rubera, telling him he was moved by the letter and urging the couple to introduce their children to the parish. He warned that there might be opposition from the congregation and the local priest, but told him to persevere for his children’s sake.

Pope Francis has long complained that the American Catholic Church is “obsessed” with abortion, birth control and same-sex marriage, while ignoring the Church’s teachings on racism, immigration and poverty.

Filmmaker Afineevsky focused his documentary on Pope Francis as a man deeply concerned with social issues and how they relate to the most vulnerable and oppressed members of society, including LGBT people, immigrants, refugees and Black Americans. The film highlights the pope’s outspoken concerns over racism — he has supported Black Lives Matter protests in the U.S.

In June, Pope Francis mentioned George Floyd by name two times in a speech. He also offered support to the highest-ranking African American bishop in the U.S., Wilton Gregory of Washington, D.C., who denounced President Trump’s visit at a religious place honoring St. John Paul II. Pope Francis also supported Bishop Mark Seitz of El Paso, who knelt in prayer during a Black Lives Matter protest. During his weekly prayer, the pope said, “My friends, we cannot tolerate or turn a blind eye to racism and exclusion in any form and yet claim to defend the sacredness of every human life.”

The pope’s comments came after President Trump posed with a Bible for a photo op in front of an Episcopal church near the White House. Protestors had been tear-gassed to make way for Trump and his entourage.

Other points addressed by Pope Francis in the documentary include climate change, which is a particular concern for the pontiff, human trafficking, and political strife like that in the U.S.

Pope Francis has been highly critical of many of President Trump’s actions and has criticized the Trump administration’s policy of separating migrant families at the Mexican border, saying populism is not the answer to the world’s immigration problems.

The documentary also addresses the Church’s priest sex abuse scandal, the breadth of which Pope Francis says he misjudged and for which he has apologized. Another interview in the documentary features Juan Carlos Cruz, a Chilean survivor of clergy sexual abuse. Cruz said that during their first meetings in 2018, Francis assured him that God made him gay and that he was in God’s grace.

The documentarian said he began working with the Vatican in 2018 to produce a film on Pope Francis, and he was given unprecedented access.

Conservative members of the Church hierarchy, like former Philadelphia Archbishop Charles Chaput, will likely be incensed by Pope Francis’s new stance on same-sex couples. The conservative wing of the Catholic Church has been divided on homosexuality for years. In 2003, the Vatican’s Congregation for the Doctrine of the Faith taught that “respect for homosexual persons cannot lead in any way to approval of homosexual behavior or to legal recognition of homosexual unions. The common good requires that laws recognize, promote and protect marriage as the basis of the family, the primary unit of society.”

The doctrine stated, “Legal recognition of homosexual unions or placing them on the same level as marriage would mean not only the approval of deviant behavior, with the consequence of making it a model in present-day society, but would also obscure basic values which belong to the common inheritance of humanity. The Church cannot fail to defend these values, for the good of men and women and for the good of society itself.”

The Vatican’s Congregation for the Doctrine of the Faith called support for such unions by politicians “gravely immoral.”

“Not even in a remote analogous sense do homosexual unions fulfil the purpose for which marriage and family deserve specific categorical recognition. On the contrary, there are good reasons for holding that such unions are harmful to the proper development of human society, especially if their impact on society were to increase,” the document said.

The Vatican has not released a statement regarding Pope Francis’s new position on civil unions. Same-sex marriage is illegal in Italy, and same-sex marriages performed in other countries are not recognized. Civil unions for same-sex couples were legalized in Italy in 2016.