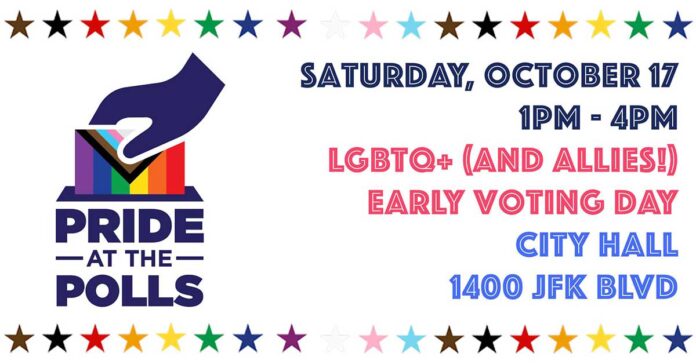 With Election Day less than three weeks away and COVID-19 infections rising again, Philadelphians are faced with not only with choosing which candidates to vote for, but also how they are going to vote. Besides voting traditionally at a polling place on election day, there are several options to vote early this year, including requesting a mail-in ballot, which can be filled out at home and returned by mail or at a drop box. Another way to vote early, thanks to the work of Governor Wolf, is at a satellite election office. Philadelphia voters can visit any of the city’s satellite election offices to vote early. Gregory O. Yorgey-Girdy, who serves on the board of Liberty City LGBT Democratic Club, explained their impact on voting in the city and the commonwealth.

“Satellite Election Offices are new ideas that were authorized by the same law, signed by Governor Wolf last year, which also created no-excuse mail-in voting. Satellite Election Offices allow people to register to vote, request a mail ballot, and cast their mail ballot,” Yorgey-Girdy told PGN. “Voters can do any or all of those things during just one visit. Also, voters can go to these offices to get new mail ballots if the mail ballots they received were completed incorrectly or destroyed.”

For those who wish to vote in person and show some LGBTQ pride, Paul Blore and Marquise Lee are the main organizers behind Pride at the Polls, which takes place at City Hall this Saturday. Blore and Lee encourage Philly LGBTQ voters and their allies to show up wearing their loudest, most prideful outfits to cast their votes.

Pride at the Polls is, according to Blore, “Part get out the vote and part Pride celebration. The intention of Pride at the Polls is to increase voter turnout among the LGBTQ+ community and particularly younger people; unite in pride and show our strength both as a community and as an electorate; build an enduring social media campaign that keeps the get out the vote message top of mind for community members from launch through Election Day.”

Also at the event will be local drag performers VinChelle and Iris Spectre, with photographer Joe Mac on hand to document. The event begins by the South Gate of Philly’s City Hall at 1:00 p.m. on October 17.

Like many states around the country, many Pennyslvanians and Philadelphians have already voted. Voting early has a two-fold level of importance this year. It can be more convenient for those who can’t easily get to their polling place on election day, and it can reduce one’s chance of COVID-19 exposure.

“I was motivated by convenience rather than fear. I also liked that I had the time to research the candidates on the ballot from home, rather than just picking at random for the lesser known offices,” O’Brien told PGN. He fears a second Trump term could lead to a Pence presidency should the president be incapacitated. “For Trump, the Bible is a prop. For Pence, it’s a legal blueprint. If Trump cannot finish out his second term, that would elevate Pence from a neutered lackey to one of the most dangerous Presidents for gay rights imaginable.”

Meg Rider, a healthcare administration manager, and Natalie McDonald, a journalist and artist, are married and make their home in Old CIty. Rider, who cast a mail-in ballot for the primary, is going to attend and vote at the Pride at the Polls event, while MacDonald plans to vote in person at her Old City polling place.

“There’s a sign on the location where I usually vote saying that we in the precinct will be directed to a different location, but so far there’s no word on where that might be. Unfortunately, none of the precinct’s voters I’ve spoken with in person or via neighborhood social media groups have heard anything about the decision as to where we will actually be casting our votes,” McDonald explained. “I don’t know if this is related to COVID-19 or not, but I sincerely hope it does not confuse or create a hardship for people to vote this year.”

As of October 13th, nine satellite election offices — where voters can register to vote as well as vote early — are up and running in the region, including at City Hall. According to Nate Osburn, the satellite offices provide a great way to vote in what we already know is a contentious election. Osburn, who previously worked in the Obama administration, says LGBTQ Philadelphians are highly motivated this year compared with four years ago.

“A lot of people are posting on social media about how they’ve voted by mail or dropped off their votes in person at City Hall,” said Osburn, who voted early. “I’m planning to volunteer on election day, so I definitely wanted to get it done in advance, but I also didn’t want to worry about the weather, a family emergency, or even having to quarantine for some reason.”

Despite the issues surrounding COVID-19, there should be no excuse holding you back from voting this year,

“The time has come for elected officials at every level of government,” Yorgey-Girdy said, “to implement laws that give LGBTQ+ individuals equal rights in all areas of life, eliminate policies that explicitly or implicitly allow for bias, and fix the broken criminal justice system. People are excited to cast a vote for the Biden/Harris ticket and hopefully see the first woman of color elected vice-president.” He also noted the importance of voting for offices at the state and local level. “People also desperately want to see the U.S. Senate, and both houses of the Pennsylvania legislature, flip from red-to-blue.”