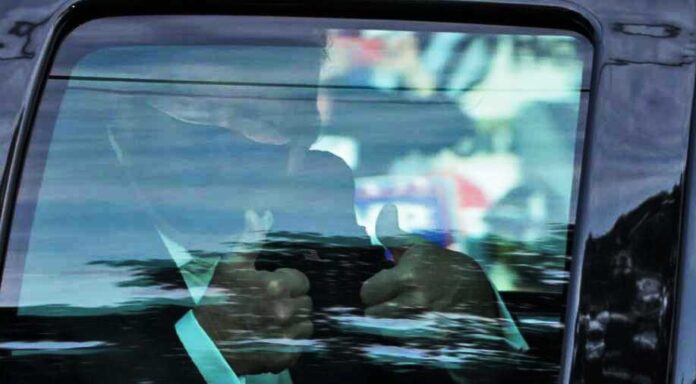 Quick, look out your window! You may get a fleeting glimpse of our so-called president waving through the window of a hermetically sealed SUV after testing positive for the novel coronavirus because he just Loves! America! So! Much!

Now, while some might say that Trump’s complete disregard for medical advice and disdain for any rules was him basically asking to be infected with COVID-19, they would be right. This diagnosis was a hard-fought outcome. It’s nice to see Trump work hard at something for once.

Trump’s positive COVID-19 test naturally caused some concerns. I mean, it’s generally a bad thing when the President gets sick. Trump being flown to Walter Reed increased anxieties about his health. As did the bizarre videos he posted from the hospital. But, thankfully, Trump is the King of Stamina and Health and Manliness and he’s got a message for America: COVID-19 ain’t no thang.

I mean, sure, it has killed over 210,000 people in this country alone. But it didn’t kill Trump. That means there’s nothing to worry about. Nothing to see here. Move along and MAGA.

Apparently those 210,000-plus people, not to mention the thousands more who are suffering with illness and experiencing a myriad of other health complications due to COVID-19, are just suckers and losers.

That means I have great news for you about cancer. I have had it twice and didn’t die either time! This is proof that cancer doesn’t kill anyone. You don’t have to die, folks, unless you don’t have the awesome cancer fighting stamina that I do. And if that’s the case, well, bummer for you.

Obviously, I am not being serious. And even if I were, I would not deserve to be taken seriously. I should be rightly told to pound sand, as my dad was fond of saying — my dad who died from cancer.

Before leaving the hospital, Trump tweeted: “Feeling really good! Don’t be afraid of Covid. Don’t let it dominate your life. We have developed, under the Trump Administration, some really great drugs & knowledge. I feel better than I did 20 years ago!”

This is a dangerous message. It continues to downplay the seriousness of COVID-19 and directly feeds the myth that COVID-19 is a kind of left-wing conspiracy to bring about the downfall of Donald Trump. That, of course, fuels the “mask wars” across the country with Trump supporters asserting it’s their right to put themselves, and you, at risk to contract the virus because of freedom.

As for those “great drugs” he’s talking about? Yeah, they’re not for you. Trump has access to treatments that aren’t available to the peasants. Not to mention the fact that Trump’s access to world-class care is unencumbered and he doesn’t have to worry about how he’ll pay for it. Because we’re paying for it. Taxpayers. A group that Trump has been revealed to not be a part of.

And I haven’t even gotten into how many members of Trump’s inner circle have now tested positive for COVID-19. The Rose Garden soirée for Amy Coney Barrett, Trump’s Supreme Court nominee who has her eye on undoing marriage equality and reproductive freedom, was apparently a super-spreader event with folks not wearing masks and not social distancing. Aside from Trump and the first lady, other folks in the Trump orbit recently testing positive for COVID-19 include Hope Hicks, Press Secretary Kayleigh McEnany, Kellyanne Conway, Republican National Committee head Ronna McDaniel, assistant to the president Nicholas Luna, Campaign Manager Bill Stepien, Chris Christie, and Republican Sens. Mike Lee of Utah, Thom Tillis of North Carolina and Ron Johnson of Wisconsin.

And then, of course, there’s former GOP presidential candidate Herman Cain who attended a June 24 Trump rally without a mask. On July 2 he tested positive for COVID-19, spent the rest of the month claiming he was getting better and then died on July 30.

I am sure all those with the virus, and especially Cain’s family, are taking great solace in Trump’s bragging that he’s feeling great. What a gift to us as a nation. Sure, we haven’t seen or touched our loved ones since March, but at least Trump feels great.

I used to say that I hoped Trump did, indeed, get COVID-19. My reasoning was that unless he had it himself, he would never care about it. Never bother to take it seriously or put together a national plan to fight it — there is still NO plan. But I admit now, I was wrong. He still doesn’t give a fuck about anyone but himself. His takeaway from all of this is, “See? It’s not that bad.” He has never once eulogized the dead or acknowledged any responsibility at all. VOTE HIM OUT.