Amy Coney Barrett, a judge on the Seventh Circuit Court of Appeals and a staunch Constitutional originalist like her mentor, the late Justice Antonin Scalia, in all likelihood will soon be sitting on the U.S. Supreme Court. Despite days of statements and questions from the Senate Judiciary Committee and many corresponding evasions and non-answers from the judge herself, the confirmation of Barrett by the Republican-led Senate looms as inevitable. With only two Senate Republicans wavering on confirmation, and despite two-thirds of Americans wanting whoever wins the Nov. 3 election to choose the justice who will succeed the late Ruth Bader Ginsburg, the votes simply are not there for Democrats to block Barrett’s confirmation.

As Hillary Clinton warned in 2016 when discussing the importance of the judiciary, “Elections have consequences.” The third Trump appointee to the SCOTUS is one of them.

During the confirmation hearings, Barrett was grilled on abortion rights, health care and the Affordable Care Act, LGBTQ rights and racism during half-hour slots for each member of the Judiciary Committee. What has evolved is a clear picture of Barrett’s stances on the most pivotal social issues of our time as well as her long-held religious and political beliefs.

When she is confirmed as the youngest member of the U.S. Supreme Court, Barrett’s testimony signals she will also become the most radically extremist of the justices. The tone of her responses during the Senate hearings has been measured, polite and deeply troubling. Democrats have revealed numerous past statements, writings and rulings by Barrett that illumine a legal scholar and jurist who does not view the landmark Roe v. Wade ruling nor Obergefell v. Hodges, which granted same-sex couples marriage equality, as settled law and whose personal beliefs — religious and otherwise — signal strong anti-abortion and anti-LGBTQ stances.

As Mayor Lori Lightfoot, herself an attorney and the first openly gay and second Black mayor of Chicago, wrote on Twitter, “The Constitution didn’t even recognize me as a human being when it was first ratified. So, no, I am not a Constitutional originalist.”

Democrats have made a significant portion of the hearings a referendum on healthcare. In the midst of a pandemic that has thus far infected nearly 8 million Americans and killed more than 217,000. The Supreme Court is set to hear a case a week after the election that could overturn the Affordable Care Act. The 2010 law governing insurance vitiated previous standards in the insurance industry that allowed insurers to bar people with pre-existing conditions such as allergies, diabetes, HIV and cancer from getting coverage. Previous standards before the ACA also allowed women to be charged more than men for insurance and allowed a lack of coverage for prophylactic screenings, like mammograms and PAP tests.

Republicans have focused on religion and religious liberty issues that have defined many of the SCOTUS rulings on LGBTQ-related cases and have been part of the Trump-Pence administration’s war on women and LGBTQ people. In the hearings, Republican senators, led by Chair Lindsey Graham (R-SC) have claimed Democrats’ have a religious bias toward Barrett, a devout Catholic. Given the current religious background of the SCOTUS — five of the eight justices are Catholic, two are Jewish and Neil Gorsuch is a former Catholic turned Episcopalian — that argument is without merit.

Yet that religion-based pivot has illumined some of the most disturbing and explosive points in the testimony. On October 13, Sen. Mazie Hirono (D-HI) and Sen. Cory Booker (D-NJ) elicited responses from Barrett on LGBTQ issues that harkened back to a pre-Stonewall era. In her questioning of Barrett, Hirono highlighted how Barrett had “not once, but twice” used the term “sexual preference” when referring to lesbians and gay men and marriage equality in earlier questioning by ranking member Sen. Dianne Feinstein (D-CA).

Hirono said, “Let me just say that ‘sexual preference’ is an offensive and outdated term. It is used by anti-LGBTQ activists to suggest that sexual orientation is a choice. It is not. Sexual orientation is both a normal part of a person’s sexuality and is immutable.”

Hirono went on to say that if Barrett believes that sexual orientation is indeed “merely a preference,” then “the LGBTQ community should be rightly concerned about whether you would uphold their constitutional right to marry.”

In subsequent questioning by Sen. Joni Ernst (R-IA), Barrett said, “I didn’t mean and would never mean to use a term that would cause any offense in the LGBTQ community. So if I did, I greatly apologize for that.”

Later, in his questioning of Barrett, Booker revisited this point. Barrett clarified,”I fully respect the rights of the LGBT community.” Barrett also said that Obergefell v. Hodges was “an important precedent.”

But when Booker asked Barrett about spousal benefits for lesbian and gay couples who were denied the right to marry for decades, she said that “the question of what are the implications of that for benefits would be something that would come up before a court later,” saying she needed to avoid being taken down “a road of hypotheticals that’s going to get me into trouble.”

She added, “I can’t opine on how cases would be resolved.” 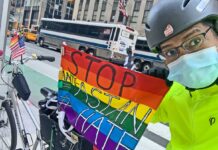 Queer Asians speak out against discrimination and injustice