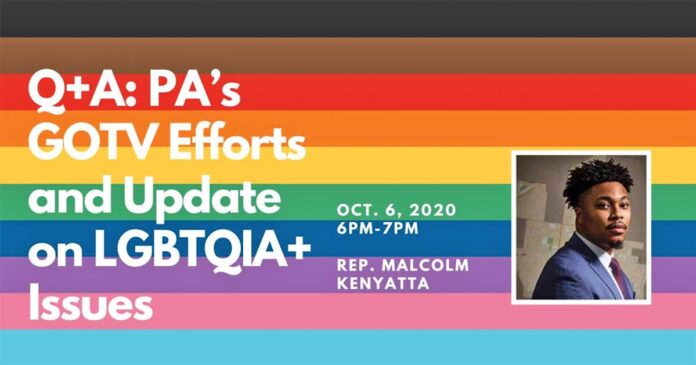 Liberty City LGBTQ Democratic Club hosted a virtual discussion with State Rep. Malcolm Kenyatta this week about how the 2020 election will impact the LGBTQ community. Kenyatta recently finished a 2100-mile tour of Pennsylvania to bring attention to local candidates. Republicans have held a majority in the State House since 2010 and in the State Senate since 1994.

“Obviously we need people to vote for Joe Biden,” Kenyatta said, “but we need people to also understand how critical it is that we win the State House. Pennsylvania is one of many states across the country that, depending on the county you live in, you either have basic fundamental rights or you don’t.”

“We have seen so many members of our trans community, very recently, murdered in cold blood in our streets, and Pennsylvania still remains one of the states where we have not pursued the type of hate crimes legislation that will make sure that folks who commit these heinous acts are held accountable not just for the act, but held accountable in a way that says you cannot treat folks in our community this way.”

Sen. Larry Farnese introduced legislation as early as 2017 to update the state’s hate crimes laws, but the Republican-led Senate has failed to move on it. It brings home Kenyatta’s point that having a Democratic majority in the State House and State Senate is as important to LGBTQ people in the state as who is elected President.

“Every issue that we face is not gonna be solved in the Oval Office,” Kenyatta said. “As much as we need to ensure that Joe Biden and Kamala Harris are elected, we need to also ensure that we’re focusing on the state and local level, because that really is where the rubber meets the road in terms of a lot of our issues.”

Democrats would need to flip nine seats to reach the 102-person majority in the State House. While Philadelphia’s delegation to Harrisburg has long been made up of Democrats, other regions of the state will need to turn Democratic to carry the party to a majority.

“We need those people to win,” Kenyatta said, “and we need those people to win because their victories impact Philadelphia. Philadelphia’s had how many Democratic members for how many years? That is not enough. We need 102 seats.” Kenyatta followed up by saying that “there are colleagues I have, and future colleagues I’ll have, who are in Bucks County, Berks County, Chester, Pittsburgh, who really need your support. And I know it’s not your state rep, but what they do and whether or not they win will have a direct impact on your life.”

Bridging the rural and urban divide, people believing they do not share the same issues as those who live in different parts of the state, is an area of concern for Kenyatta and for Democrats, who have done well in urban and suburban areas but pointedly not in rural areas. Kenyatta stressed that working class people are in all areas of the state, and all of them have similar concerns.

“Every single place I went [on the Flip PA Tour], whether I was on a farm in Mercer County, or talking to Black and brown folks in Erie, or down in Beaver or Butler or in central PA, people are asking: ‘When are working people going to be centered in our political conversations?’ This is the reality.” Kenyatta included the Republican majority in Harrisburg and President Trump among those whose leadership ignores the experiences of working class people.

Republicans in Harrisburg have continually sought to make voting more difficult despite concerns over the spread of COVID-19. Last week, they introduced a resolution that would allow them to form a committee with subpoena power to “oversee the integrity” of the 2020 election. Kenyatta recently got into a heated back-and-forth with Rep. Garth Everett (R-Lycoming) about the purpose of the committee. Everett said that the committee would only investigate after the election, but the text of the resolution contradicted Everett’s claims.

Kenyatta explained the danger of the proposed committee to Liberty City viewers: “You’re going to have people who are running for election, actively investigating their own elections, as people are voting. So the whole goal of this committee, which they’re calling the committee on election integrity, is to muddy up the results, create so much delay, chaos and confusion that it then justifies them appointing their own electors, completely nullifying the will of the voters here in Pennsylvania. It is a disgusting thing that they’re doing. It is the most undemocratic thing I’ve ever seen, and I’m not sure I’ve ever seen a state legislature try some nonsense like this. But because Pennsylvania is so important we have to take it very seriously.” Kenyatta ended by encouraging people to call House Speaker Brian Cutler (R-Lancaster) and tell him not to run the resolution.

Despite how overwhelming the 2020 election might seem and the feelings of powerlessness that those not in office might feel, Kenyatta reminded viewers that there are still things in addition to voting that everyday people can do to make their voices heard. He attributed those voices with Pat Toomey’s recent decision not to run for public office when his Senate term ends in 2022.

“Look at the amazing women who started and led “Tuesdays with Toomey.” They scared him out of office because they just came out every single day and asked him to do his job.” Kenyatta applauded their efforts. “These are regular people who understood their power, started educating each other, started linking together, until they created a whole network across the state and inspired people in other states to do that with their Senators as well. That is power.”