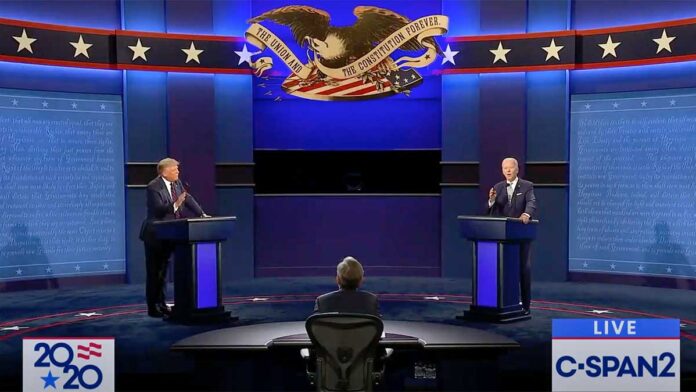 CNN anchor Dana Bash described the first presidential debate between President Donald Trump and former Vice President Joe Biden succinctly: “That was a sh*tshow. That was a disgrace.” Fellow anchor and native Philadelphian Jake Tapper agreed, adding, “That was a hot mess inside a dumpster fire, inside a train wreck.”

New York Times reporter Astead Wesley put things in perspective, noting on Twitter, “Nixon looked a little sweaty at one debate and our parents talked about that for decades.”

If you thought Trump’s malevolent stalking of Hillary Clinton on a town hall debate stage in 2016 was extreme, Tuesday night’s debate ramped that up exponentially, with the President attacking both Biden’s dead son and his living one in the most scurrilous debate exchange in years. Trump, who spent his 90 minutes on the Cleveland debate stage fighting with Biden, moderator Chris Wallace and even the concept of civil debate, lost this first foray due almost entirely to his bellicose and abusive attitude.

For Philadelphians, the debate turned personal as Trump targeted the city repeatedly by name. But the coup de grace that should have sent a shiver down the collective spine of every person of color, LGBTQ person, Jew, Catholic, Muslim and immigrant was Trump’s tacit refusal to call out white supremacist violence when asked to by moderator Chris Wallace.

Wallace asked, “Are you willing tonight to condemn white supremacists and militia groups and to say that they need to stand down and not add to the violence in a number of these cities as we saw in Kenosha and as we’ve seen in Portland?”

Trump’s response was chilling: “Proud Boys, stand back and stand by.” And if his intent to have such groups take up arms was not clear, Trump added, “But I’ll tell you what, somebody’s got to do something about antifa and the left.”

Within minutes of Trump’s comments, the extremist militia group, Proud Boys, had put up a new logo with the president’s words. Social media was awash in extremists taking Trump’s words as support for their message and cause.

It was an unparalleled low point in modern American debate history.

The Proud Boys are best known as the group that organized the fatal rally in Charlottesville that Biden says convinced him to get in the 2020 race. Founded by Gavin McInnes, the group has a long history of homophobic, transphobic, misogynist and Islamophobic screeds. In 2014, McInnes wrote an op-ed titled “Transphobia is perfectly natural.” GLAAD said that the op-ed was “considered by many to be one of the most offensive op-eds written about transgender people.”

That is the type of person who the President of the United States told to “stand back and stand by.”

Trump also reiterated his refusal to accept the results of the election if he is not the winner. He continued to undermine the integrity of mail-in voting, which has been the only means to vote in several states for years and which Pennsylvania first adopted this year during the primary due to the coronavirus pandemic.

Without evidence and over objections from both Biden and Wallace, Trump asserted that the process of voting by mail, which all states have expanded in response to the pandemic, was rife with fraud. He referenced a few ballots accidentally disposed of in Pennsylvania and cited Philadelphia as a locus of fraudulent voting.

Trump falsely accused Philadelphia election officials of blocking access for poll watchers at the handful of satellite election sites that opened across the city on Monday.

“As you know today, there was a big problem in Philadelphia,” Trump said. “They went in to watch, they’re called poll watchers. They’re very safe, very nice thing. They were thrown out, they weren’t allowed to watch. You know why? ‘Cuz bad things happen in Philadelphia, bad things.”

Voter intimidation is against the law in Pennsylvania, which has strict guidelines about who can enter polling places.

Regarding the satellite election sites, Philadelphia City Commissioner Al Schmidt said “Satellite offices are not polling places, and poll watcher certificates have not been issued for any individuals for anything other than poll watching activities on Election Day at Polling Places. So individuals seeking to receive services from a satellite office are not permitted to be there for other purposes.”

Embedded in the turbulence and chaos of the night was some discussion of healthcare, with Biden emphasizing Trump’s failure to contain the coronavirus pandemic by taking early, concrete, science-based steps and Trump countering by tying Biden to Bernie Sanders’ Medicare-for-all platform.

There was also limited discourse on the Supreme Court and Trump’s nominee, Amy Coney Barrett, which led to some tense exchanges in which Trump flatly lied about her record on abortion rights and the Affordable Care Act. There was also some discussion of racial strife in the country, which is what led to the Proud Boys statement.

The most clearly defined topic was the environment, with Biden laying out his version of the Green New Deal plan that he calls, simply, the Biden Plan, which is a comprehensive effort to change the nation’s reliance on fossil fuels and shift the economy to a green-based job creator on a massive scale.

Trump again tied Biden to Sanders and “socialism,” yet professed that he wants the “cleanest air and purest water,” despite having rolled back environmental initiatives from the Obama-Biden administration and having withdrawn from the Paris Accord.

A read of the debate’s transcript elicits more information disseminated by the contenders than came through during what often felt like a shouting match. But what came through, regardless, was Biden looking into the camera and speaking to the American people to engage them and their votes. Trump never did that.

Biden was often weak in his responses, refused to answer some questions on the courts and on the economy, and didn’t take clear openings Trump accidentally gave him. Yet Biden still came out stronger and, above all, more rational and fundamentally decent than Trump, who reiterated his racist comments about the “China virus” and referenced Sen. Elizabeth Warren as “Pocohantas.” He also name-called the Senate Minority Leader as “crying Chuck” Schumer, and invoked “Crooked Hillary.”

Trump, who is down at least five percent in many critical swing states including Pennsylvania and as much as nine percent nationwide, needed a win at this first debate. He needed to lay out his message for why Americans should want another four years. Instead Trump telegraphed all that is wrong with his presidency and how much of a failure he is at promoting the Republican message.

The main takeaway remains, however: The President of the United States of America told a terrorist group to “stand by” and told America that he won’t go quietly if he loses the election — Constitution and voters be damned. Trump undermined confidence in the election and that the results would be free and fair, and at times he attacked the very predicate of a democratic process.

Early voting is currently underway in many states. For more information on how to vote, visit vote.gov/.