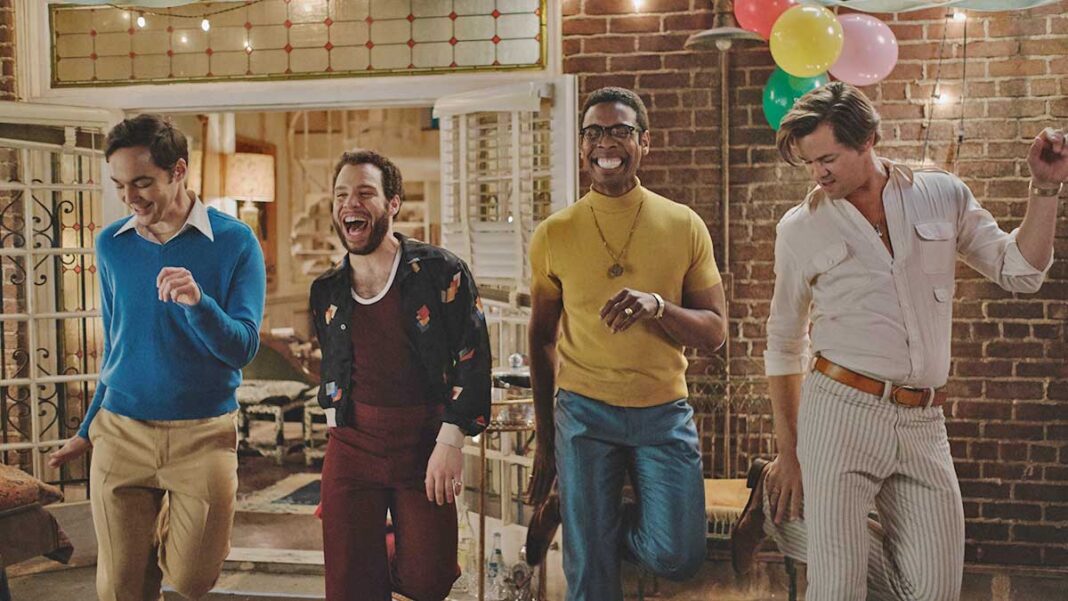 The 2018 Broadway revival of the late Mart Crowley’s landmark play, “The Boys of the Band” was notable for featuring an all-gay cast. That cast has now made the show into a film — dedicated to the memory of the playwright — that is available on Netflix starting September 30.

Having seen the stage production, this new screen version lacks the raw power and intensity of the theatrical experience. It is not just that director Joe Mantello (who also helmed the Broadway show) “opens up” the drama for the film, it is that the forceful performances lose much of their impact on the small screen.

Set in New York City, 1968, “The Boys in the Band” opens with a montage that introduces the characters. Harold (Zachary Quinto) is lighting a joint and putting on music. Michael (Jim Parsons) is seen shopping. Donald (Matt Bomer) is anxious in traffic. Hank (Tuc Watkins) is playing racquetball. His lover Larry (Andrew Rannells) is picking up a trick on the street. Cowboy (Charlie Carver) is sucking suggestively on a popsicle outside an adult movie theater. Bernard (Michael Benjamin Washington) is working in a library, and Emory (Robin de Jesus) is working in an antique store.

The story begins in earnest as Michael is preparing to host a birthday party for Harold in his rooftop apartment. However, his plans are interrupted by an emotional call from Alan (Brian Hutchison), his former roommate in college. Alan wants to come over for a drink, and Michael reluctantly agrees knowing that Alan will take issue with Michael’s coterie of gay friends.

This tension forms one of the themes of “The Boys in the Band,” about how “straight” society at the time (and perhaps even still today) looks down on homosexuals. Mantello emphasizes this by including an unnecessary and too on the nose shot of a heterosexual couple looking askance through Michael’s doorway as they glimpse a flamboyant moment at the party.

But the real topic of “Boys” — and one that generates most of the discussions of the play — is the idea of self-loathing, pinpointed by Michael’s impassioned plea during the drama’s climax, “If we could learn not to hate ourselves so much.” The shame, anxiety, and guilt these gay men all have is palpable. They crave love, dignity, and respect — from themselves, each other, and society.

The first half of the party is breezy with the characters mocking each other in playful ways. The banter, between Michael and Donald especially, is amusing at first, as are scenes of Emory camping it up and teasing Bernard, who dishes it back. Things start to get serious, however, once Harold finally arrives. He and Michael viciously snipe at each other, and their cutting remarks give the film some electricity. It also provides one of the most poignant and heartfelt moments, when Harold opens Michael’s gift and it leaves him speechless. The silent exchange between Michael and Harold is quite moving.

“The Boys in the Band” never quite achieves another scene as poignant or as powerful as this one. The second half of the film has the characters playing “The Truth Game,” which involves calling someone they truly loved. It’s a sick game, orchestrated by the increasing bitter and hostile Michael who seems to relish bringing everyone down. Parson’s performance was indelible on stage, but here it feels oddly artificial. He can still spew Crowley’s witty and bitchy one-liners, and his facial expressions belie the deep-rooted pain Michael feels inside, but Parsons just feels muted on screen. Two other superb stage performances, by Michael Benjamin Washington and Robin de Jesus (who was nominated for a Tony), also fail to resonate here.

This is probably because the speeches Bernard and Emory have as each play the Truth Game are intercut with flashbacks of their memories. The extraneous scenes of faceless young men skinny-dipping in a moonlit pool dilute and distract from Bernard’s somber confession about loving the son of the family he and his mother worked for. Likewise, Emory’s painful story, about his youthful crush on an upperclassman, does not need scenes of the prom where Emory was ridiculed. The film should tell, not show. Less is more. Even a quick glimpse of the naked Larry and Donald coupling up during Larry’s revelation is gratuitous.

The lone exception is Hank’s speech, where he describes his first sexual encounter with a man, a stranger in the men’s room at Grand Central Station. Mantello films this sequence artfully, getting at Hank’s uneasy thrill of an impulsive tryst. Tuc Watkins sells it by downplaying.

The other performances are mixed. Zachary Quinto’s appropriately wry, affectated turn as Harold never quite transcends the role. Brian Hutchison and Andrew Rannells lend solid support as Alan and Larry, respectively. But Matt Bomer has too little to do once the party starts, and Charlie Carver has even less, although he generates a few laughs at his character’s expense.

“The Boys in the Band” does crackle during the honest and candid sequence of the men admitting when they came out to themselves. There is emotion as Hank and Larry heatedly negotiate the terms of their relationship, and forgiveness from Emory and Bernard who are slighted. But most importantly, there is the constant awkwardness surrounding Alan that ultimately yields a vital sense of liberation for these gay men of a certain place and time. That is the show’s enduring legacy, and it does emerge in this otherwise flawed film version.

“Beautiful Darling” and “Open Up to Me”