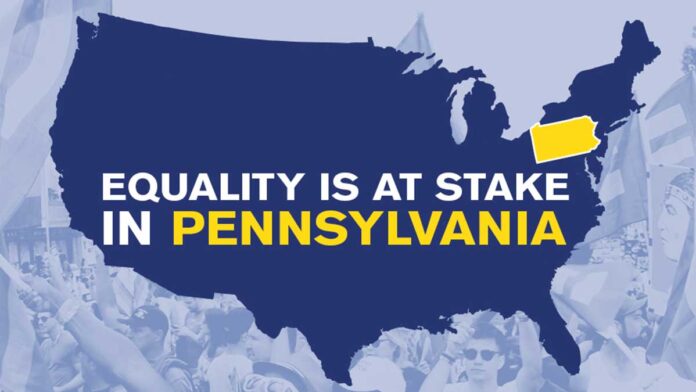 Earlier this week the Human Rights Campaign announced it will be adding five new staff members to their team in Pennsylvania, bringing the total number to 14. HRC has directors in several states mobilizing the LGBTQ vote, including in Arizona, Michigan, Nevada, Ohio, Texas, Wisconsin, and Pennsylvania.

“We are thrilled to grow our grassroots army to do the difficult, necessary work of mobilization and turnout of Equality Voters ahead of the most consequential election of our lives,” said Ryan Matthews, HRC’s Pennsylvania State Director. “This election means literal life or death for some LGBTQ people. The work our organizing staff will do over the next 50 days will push our endorsed candidates over the top to victory and help us expand and defend key protections for LGBTQ people in 2021 and beyond. Through the power of organizing and this investment in Pennsylvania, we are competing for every last vote.”

For this election cycle, HRC has made an historic number of recommendations for the state including for out State Representatives Malcolm Kenyatta and Brian Sims. Kenyatta was one of the keynote speakers at the Democratic National Convention. Like HRC, both Kenyatta and Sims have reiterated the safety of mail-in voting and the need for voting equity. President Trump and his surrogates have continually spread misinformation about mail-in voting in particular, and both Twitter and Facebook have flagged many of Trump’s posts as incorrect.

Governor Tom Wolf has called for several recommendations for the general election, including requiring counties to start sending mail-in ballots at least 28 days before the election rather than 14 days as currently required, but he has met resistance from the Republican-led legislature in Harrisburg, which has sought to reduce the use of voting drop boxes and shorten the window to acquire a mail-in ballot, among other changes.

In addition to placing a focus on outreach on mail-in voting due to the COVID pandemic, HRC has utilized the TEAM app to allow HRC volunteers and staff to contact voters via phone or text.

“This app is a crucial component of our 2020 organizing efforts,” Geoff Wetrosky, national campaigns director for HRC, wrote in a Morning Consult op-ed. “We are investing in distributed organizing and empowering our volunteers to engage their networks from their homes — or wherever they may be — about HRC and the pro-equality candidates and causes we support.”

LGBTQ voter outreach is especially important in 2020. A study conducted by the Williams Institute concluded that about 21% of LGBTQ voters are not registered to vote. Lucas Acosta, the national press secretary for HRC, disagrees with those numbers.

“I know the stat, [and I] would argue it’s not 100% accurate. We know that LGBTQ people participate in politics more than non-LGBTQ people. For example in 2018, LGBTQ people represented 6% of the electorate while only representing 4.5% of the overall adult population. Our community is highly political and highly engaged.”

“We have identified a need to get people of color to get registered to vote but also to be empowered to have their voices heard. We recently held a Facebook Livestream event, “Philly’s Grassroots GOTV Plan,” with Council member Jamie Gautheir, and State Representative-Elect Rick Krajewski,” Yorgey-Girdy shared with PGN. “The goal is to make sure everyone across West and Southwest Philly can vote safely this November. LCDC will continue its efforts to encourage young people of color to register to vote and actually exercise their right to vote.”