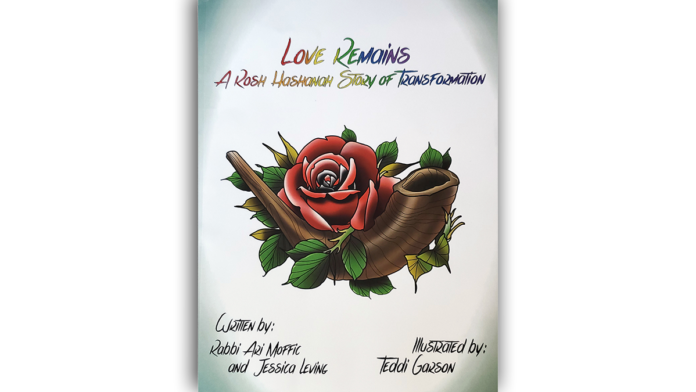 A family’s annual celebration of Rosh Hashanah, the Jewish New Year, and the changes that each year brings, form the texture of “Love Remains: A Rosh Hashanah Story of Transformation,” a new picture book about a Jewish family and their transgender child. One of the authors, Rabbi Ari Moffic, spoke with me about it.

Moffic, the director of congregational learning at Temple Beth-El in Northbrook, Illinois, is a Reform Jewish rabbi married to another Reform rabbi. They have two children, a cisgender teen and a transgender tween. Parenting a transgender child “is nothing that we were prepared for or really knew anything about until we started raising this child,” Moffic said. “It’s definitely set us off on the course of a new education and having new people in our lives and experiences. It’s been really a blessing.”

The idea for the book took shape years ago when Moffic spoke with another parent of a transgender child. They realized that although some Jewish publishers were starting to publish children’s books with LGBTQ themes, they hadn’t seen any with Jewish transgender characters. They wanted to change that so that their children “can see themselves in stories” and so “all children could see the range of human experience within a Jewish setting,” Moffic explained.

“I had this story idea in my head but I’d never written a children’s book,” she continued. She eventually connected with Jessica Leving, author of a children’s book about growing up with a sibling who has a disability. In addition to her writing skills, Leving had done LGBTQ advocacy and also knew how to self-publish on Amazon. Self-publishing was important because, while most children’s book authors have their illustrators chosen by the publisher, Moffic already knew the illustrator she wanted to use: Teddi Garson, “an amazingly talented genderqueer Jewish tattoo artist.” Moffic had conducted the wedding of Teddi’s sister.

Although it might seem edgy to have images drawn by a Jewish tattoo artist (according to some interpretations of Jewish law, Jews should not get tattoos), Love Remains is deeply rooted in Jewish values and traditions. Rosh Hashanah is the start of the new year and part of a wider time for self-reflection during the Jewish High Holidays. It offered “just the perfect backdrop to talk about change and renewal and transformation,” Moffic said.

The book starts by quoting Ecclesiastes 1:3-8, which begins, “A season is set for everything, a time for every experience under heaven.” Floyd Kessler, a Jewish transgender artist, contributed an image of the text spiraling inside an apple, a traditional Rosh Hashanah symbol.

Change is reflected throughout the story, as year after year a child goes with mother and father to the grandparents’ house for Rosh Hashanah. One year, their favorite flower shop is closed and they must find another; the next year, the grandfather has died; the year after that, a cousin has a new baby.

The child similarly transforms. Initially, she has a ponytail and uses the name Danielle and female pronouns. The next year, she is excited about getting a boy’s part in the school play. The year after that, the child is reluctant to go to the family dinner. The dad gently asks, “Are you nervous because everyone knows you’re Dan now, and they might get your name wrong or have questions?”

That was the concern, but Dan, now with short hair, finally agrees to go. “The family knows this is who I’ve always been anyway,” he says.

Indeed they do. When everyone shares something new that has happened to them since last year, Dan mentions going on a school hike. Everyone laughs good naturedly. Dan’s mom is surprised that’s what he wanted to share. Grandma notes wisely that many things can be important. An aunt observes, “You seem happy and at peace.” Their absolute acceptance — and the idea that a transgender identity is only one part of a person — makes this a story that should delight families with transgender children.

The book is on the wordy side of the picture book range, and it also shows rather than tells about Dan’s transition and what it means to be transgender, which means it may be best for a child to read with a grown-up. That’s not a criticism; this book fills a different need than more explicitly explanatory texts by placing Dan’s transition in a broader story about family, tradition, and change.

Moffic said she imagines parents, grandparents, teachers, or librarians reading the book to a child and asking questions like, “Do you notice anything about how this kid’s appearance changes?” or “Can you tell if someone’s a boy or a girl based on how they look?” They can also talk about “how changes can be hard and exciting” and “becoming who we’re meant to be is just this evolving part of our stories.” Moffic invites those seeking discussion questions to email her at loveremainsbook(at)gmail.com for a list tailored to their needs.

This year, Rosh Hashanah, which begins the evening of September 18, “is going to feel different for so many reasons,” she said. “But I think we have to embrace change and transformation and growth and renewal and the opportunity to keep living.”