Summer is usually a time when the world slows down ever so slightly. Many people go on vacation, legislatures and schools take a break, and the warmer weather leads to more time spent outdoors in the fresh air.

Not this year. Not at all.

This summer might go down as one of the most chaotic summers ever. Actually, it’s safe to assume that many would call it, unquestionably, the most chaotic. And it’s not hard to understand why.

Let’s start with COVID-19. The pandemic has thrown nearly every single industry and every single community in the world into disarray.

First and most importantly, people are getting sick and dying from the virus. Those who have not gotten sick, especially those who live with or care for high risk individuals, are having to take precautions including wearing masks, social distancing, and avoiding crowds. They have also had to deal with the confusion stemming from a federal government that has not provided accurate, timely information about how to best stop the spread of the virus.

Second, the pandemic has crippled or completely shut down a plethora of industries and venues both large and small. Here are just a few: airlines, hotels, restaurants, movie theaters, bars, clubs, retail, bowling alleys, cruise ships, sporting events, concerts, amusement parks. And here are just a few types of people who have been furloughed or laid off as a result: actors, bartenders, pilots, athletes, chefs, artists, hospitality workers, singers, directors, salespeople, technicians, dentists, and the list can go on and on.

That doesn’t even include those whose industries were not forced to shut down but are still suffering because people are spending their money in different ways.

But it isn’t just COVID-19 redefining what summer means. We also have a nationwide problem of systemic racism and police brutality that has prompted protests, debates, and calls for change all across the country. Racist statues and symbols have been taken down in various states, with many more facing increased scrutiny. Calls to reform the police have gotten widespread attention in the media, and some cities have promised to enact reforms.

The movement has also spread to other countries, including Great Britain, where a statue of a slave trader was ripped down and replaced with a statue of a protester.

And in this country we also have a crisis — which is not new nor is it limited to the summer months — of trans people being harassed, attacked, and murdered.

Two weeks ago in this editorial, I wrote about how we should not think of those who have died as mere statistics. As best we can, we need to honor them as individuals and paint as full a picture of their lives as possible. People should not be known solely for the way that they died.

This week in PGN, we’ve written the names of the trans people who have been murdered in 2020, and we’ve included details about who they were as people. The things they loved doing, their hopes for the future, the ways in which they inspired people. 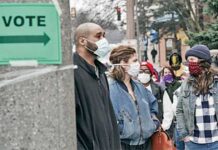