A statewide coalition of 50 LGBTQ organizations is demanding reforms within the Bloomsburg Fair, after the fair sponsored a carnival featuring a transphobic portrayal of Pennsylvania Health Secretary Rachel Levine.

Bloomsburg is a town about 100 miles north of Philadelphia. It’s local fair has been an annual tradition since 1855.

The carnival at issue, which benefited local fire companies, included a dunk tank with a man wearing a dress, glasses and blond wig having balls thrown at him. The event took place July 17-18 and subsequently was featured on Facebook. “Dr. Levine? Thank you. [Y]ou were a hit and raised a lot of money for the local fire companies. Wonder why so many were trying to dunk you,” said the Bloomsburg Fair Association’s Facebook post, which included a photo of a soaked man in a dunk tank. The post has since been deleted.

During a July 21 press conference, Bloomsburg Fair officials said the man in the dunk tank intended to impersonate Marilyn Monroe. He was identified in published reports as David Broadt, chief of the Main Township Fire Company. Broadt couldn’t be reached for comment. Fair officials said carnival attendees perceived the man in the dunk tank to represent Levine, but that wasn’t the organizers’ intent.

The coalition of 50 LGBTQ organizations has issued a series of demands to Bloomsburg Fair officials. They include a written apology to Levine, posted publicly and mailed to her office; a donation of an equal amount of funds as raised in the dunk tank to the Columbia Montour Pride Working Group of the Coalition for Social Equity; the posting of an LGBTQ-inclusive non-discrimination policy on the Bloomsburg Fair’s website, which all fair vendors must affirm each year; explicit support for statewide LGBTQ non-discrimination protections in Pennsylvania; a commitment that the entire board and staff of the Bloomsburg Fair will receive training on LGBTQ cultural awareness and equity facilitated by transgender individual(s) who are compensated for their time and expertise; a complimentary vendor space at the next two Bloomsburg Fairs to be used as an LGBTQ welcome and resource center which would be staffed by the Coalition for Social Equity and other community-inclusion organizations in north-central and northeast Pennsylvania.

“Community advocates have requested to meet with the board directly, but so far there’s been no response,” said Jason Landau Goodman, executive director of Pennsylvania Youth Congress. “It’s up to the board to make the next move. We’re hopeful. But change doesn’t happen overnight. It happens through conversations and education over the long term. Many of us are committed to supporting that work in Bloomsburg and greater Columbia County.”

Mazzoni Center issued this statement: “The Bloomsburg Fair has offered at least three explanations, but no apology, for boasting about using Dr. Levine — without her consent — as the human target for its dunk tank. When someone keeps changing their explanation, that is a telltale sign of a bad motive. At best, the original [Facebook] post — asking ‘why so many people wanted to dunk’ her — showed callous disregard for the widespread and well-documented violence against trans women in Pennsylvania and elsewhere. This was not ‘fun and games.’ Dr. Levine is a strong, resilient leader, and while people are always free to disagree with public officials on policy grounds, it is particularly shocking that of the thousands of local, state, and national public figures they could have chosen, they singled out a trans woman for this exercise in ‘target practice.’  It sent a hostile message to other trans women — and, for that matter, all trans folks — and offered encouragement to people who want to cause harm. Enough with the excuses. They owe an apology to Dr. Levine, and to all trans folks, particularly trans women.”

Trans attorney Julie Chovanes also blasted Bloomsburg Fair officials. “Dr. Levine has saved many lives during this pandemic, during the opioid crisis, and in her other work,” Chovanes told PGN. “I’ve been to the Bloomsburg Fair and have seen the people who run that fair. For them to criticize her despite her lifesaving work — and about her looks of all things — reminds me of the saying that people in glass houses shouldn’t throw stones.”

Levine addressed various transphobic incidents involving her during a COVID-19 briefing on July 28.

“I feel that I must personally respond to the multiple incidents of LGBTQ harassment and specifically transphobia directed at me that have been reported in the press,” Levine said. “I would first like to sincerely thank Governor Wolf for his continued support and for his comments last week. The LGBTQ community has made so much progress under Governor Wolf and his leadership during his time in office. But I want to emphasize that while these individuals think that they are only expressing their displeasure with me, they are, in fact, hurting the thousands of LGBTQ Pennsylvanians who suffer directly from these current demonstrations of harassment. Your actions perpetuate the spirit of intolerance and discrimination against LGBTQ individuals and specifically transgender individuals.”

Levine continued, saying “To the perpetuators of these and the perpetrators of these actions: if your apologies are sincere, then I accept your apologies. But an apology is the beginning, not the end, of the conversation. I call on you, I call on you and all Pennsylvanians to work towards a spirit of not just tolerance, but a spirit of acceptance and welcoming towards LGBTQ individuals. We all need to foster that spirit of acceptance and welcoming to LGBTQ individuals and celebrate the wonderful diversity of our Commonwealth. Our children are watching. They are watching what we do, and they are watching how we act. And to all LGBTQ young people it is okay to be you. And it is okay to stand up for your rights and your freedoms. As for me, I have no room in my heart for hatred, and frankly I do not have time for intolerance. My heart is full for the burning desire to help people. And my time is full with working towards protecting the public health of everyone in Pennsylvania from the impact of the global pandemic due to COVID-19. And I will stay laser-focused on that goal.” 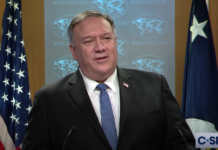 A timeline of the anti-LGBTQ Trump administration