TransWork, a program of the Independence Business Alliance (IBA), hosted a Zoom discussion panel this week to address the experiences of and provide advice for Black and Brown transgender and gender non conforming (TGNC) individuals in business and employment.

“With the amount of violence that happens towards trans-identified folks,” Morrison said, “I think it’s really important that we start to put policies and things in place so that they aren’t targeted for who they are.”

Morrison guided the panel discussion via general questions, including the impact of one’s gender identity on career-related decisions, specific barriers to employment for TGNC people of color, how to navigate workplace discrimination, how entrepreneurs’ experiences as employees helped them run their businesses, how trans folks can help each other, and how allies can support trans people when it comes to employment.

“I think that even though we’ve seen incredible calls to action around race relations in the United States and particularly in the Philadelphia area, one of the things we witnessed is that beyond the Philadelphia Queer March for Black Lives, there wasn’t much of a centering on Black and Brown trans lives and how they matter. One of the ways we can do that is through economic uplift and calling people’s attention to that.”

When dealing with discrimination in the workplace, Sanchez, the trans justice program coordinator at the ACLU of Pennsylvania, underscored the need to keep receipts and documents and to get advice from lawyers and human rights agencies. The need is especially important with the recent Supreme Court ruling extending workplace nondiscrimination protections to gay, lesbian and transgender employees.

“There are agencies like the ACLU and if you’re trans, the Transgender Law Center,” Sanchez said. “If you don’t know something, it’s always good to ask a trans leader in your community about what resources are out there for you. When I experienced discrimination in the workplace, I didn’t have that representation. It was there, but I just didn’t have access to it, and it makes a big difference.”

Morrison told PGN that even though members of the LGBTQ+ community now have the law on their side when it comes to workplace discrimination, trans and gender nonconforming folks still encounter roadblocks.

“Since the victory in the Supreme Court, there are still obstacles in the workplace culture for trans and gender nonconforming folks –– refusal to hire, privacy violations, being harrassed. There have been quite a few reports of physical and sexual violence on the job.”

Tokenism in hiring practices was also a prominent discussion topic in the panel. Thomas, who founded Sisters PGH, a trans-centric drop-in space, talked about her experiences as the token trans woman of color in nonprofit organizations where she previously worked.

“They don’t care about us, we just bring in grant dollars for them,” Thomas said. “Once I started experiencing that type of discrimination of being this token…but wasn’t getting paid enough to live, it started putting things in perspective for me.”

The discussion veered toward available resources for trans folks of color who have little to no experience entering the workforce. Von Moi, commissioner of The City of Philadelphia’s Mayor’s Commission of LGBT Affairs, cited support and navigation as two major factors that can benefit many trans folks in that position. She mentioned that Sanchez previously helped her navigate the healthcare system.

“It just goes to show that you don’t know it all,” Von Moi said at the event. “Sometimes we have to look out for our own because no one else is going to do it. Sometimes even those who think that they are helping, are not helping enough because they can only see to a certain line, and it’s only people who have gone beyond the line…who can help.”

Multiple panelists acknowledged the fact that trans people of color tend to start their own businesses to escape the largely white, cis-dominated for profit and nonprofit worlds.

“A lot of POC don’t work in corporate America because we can build our own, we can do our own,” said Fleming, a licensed practical nurse and the founder of Stealth Bros. Co. “But why not integrate? You can bring people on once you’re in a position of power. You can have one perception of me because of the color of my skin, but let me show you how I work and let me show you my character. Once that is portrayed, that gives me the opportunity to bring my people, and now we’re all winning, we’re all at the top, we’re all sharing this abundance of wealth rather than keeping it all in one circle.”

Members of the panel also raised the important points of the need for allies to speak out when they see bias or unfair treatment toward trans people of color, to not assume that all TGNC people have experienced trauma, and to avoid putting the onus on TGNC people of color to foster diversity and trans-competent education in the workplace.

When Morrison asked the group how allies can help trans folks and how the trans community can help one another, Casado, a chef and owner of Flavors of your Palate, echoed a running theme, “Hire trans folks,” he said. “Allies can start by doing simply that. And educate yourself, don’t put that kind of responsibility on trans folks. There are many resources out there. In terms of helping one another…include trans conversations in everything you do.” 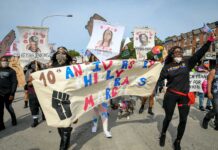