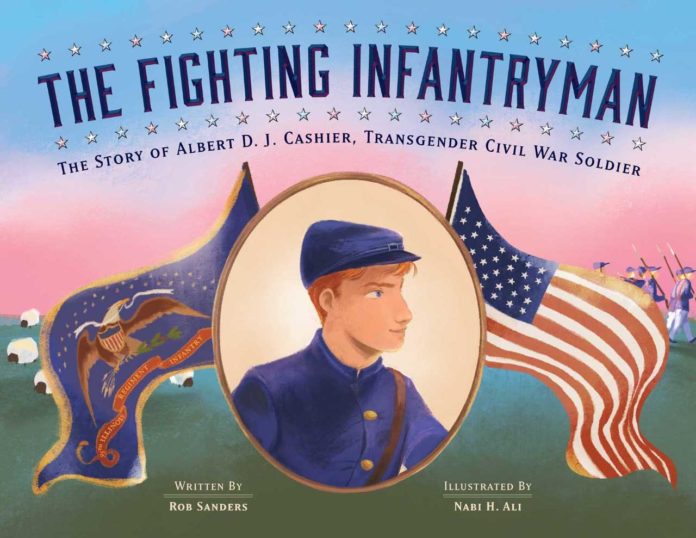 New books can be a delightful relief in these days of quarantine. Here are some of the many new LGBTQ-inclusive picture books coming out in May. (See mombian.com for even more.)

“The Fighting Infantryman,” by Rob Sanders and illustrated by Nabi H. Ali (Little Bee), is the true story of Albert D. J. Cashier, a transgender soldier in the U.S. Civil War. At 19, Albert, an immigrant from Ireland who had been assigned female at birth but had long presented a male identity, enlisted in the Union Army. After the war, he was always proud of having been a “fighting infantryman.” When in his later years, he was admitted to a veteran’s hospital and his biological sex became known, he almost lost his military pension. His former comrades stood up for him, though, and he retained it — and upon his death, his gravestone reflected his military unit and chosen name. Sanders notes in an afterword that while transgender people have always existed, terminology has changed across time and cultures. Nevertheless, “it’s possible, even likely” that Cashier was transgender. In the story itself, Sanders reinforces that the way Cashier lived his life “was more than a choice. It was who Albert D.J. Cashier was.” A rare and needed picture book of a pre-Stonewall LGBTQ hero.

“Max on the Farm,” by Kyle Lukoff and illustrated by Luciano Lozano (Reycraft), is the third book in Lukoff’s delightful series about a fictional transgender boy and his friends. In this one, Max, a transgender boy, visits a farm with his class, including his friend Teresa. Lukoff makes a great point about gender by showing us that even cisgender girls like Teresa can bend gender norms — she likes to get “really dirty” while playing outdoors and is willing to flout rules to find adventure. Max is more hesitant but ultimately has fun during their gentle mischief. Max’s transgender identity isn’t a focus, but nor is it ignored completely; when the square dance teacher thinks Max belongs with the girls, he goes over to the boys’ side. “All the kids in my class know I belong there,” he says. Another charming book in the series.

“My Maddy,” by Gayle Pitman and illustrated by Violet Tobacco (Magination Press), is a series of reflections by a child (who reads as female) about her parent who is “neither a boy nor a girl.” Throughout the book, the protagonist observes Maddy’s love of things that are in-between, such as a sunrise, which is neither day nor night, but “kind of both, and something all its own.” Similarly, Maddy loves motorcycles (neither car nor bicycle, but something of their own) and, with a touch of humor, sporks. We also see how Maddy cares for their child, making snacks, reading bedtime stories, and wishing sweet dreams. It’s a loving portrait — and a detailed Note to Readers offers adults information and guidance from clinical psychologist Randall Ehrbar on intersex, transgender, nonbinary, and other gender diverse parents.

Two young queer people are telling their own stories in two books. “Be Amazing: A History of Pride,” by drag kid Desmond Is Amazing (Farrar Staus Giroux), is less a detailed history than a short overview of the Stonewall Riots and the first March one year later; brief biographies of Stonewall icons Marsha P. Johnson and Sylvia Rivera; and a personal description of the influence Pride has had on Desmond’s life. A mention of President Obama’s declaration of Pride Month in 2009 makes it (incorrectly) seem as if that action legitimized the observance. The book is more effective when Desmond tells us about his first time at Pride, becoming a “viral drag sensation,” and how he was inspired by RuPaul (who gets a short bio) and other LGBTQ icons (several of whom are named without further information). What it lacks as a full history, it makes up for with an enthusiastic message to “be amazing,” and with dazzling illustrations from Dylan Glynn.

“I’m Not a Girl,” by Maddox Lyons, a 12-year-old transgender boy, and Jessica Verdi, with illustrations by Dana Simpson (Roaring Brook), is based on Lyons’ own journey as a transgender boy. “I know girls are cool,” the protagonist says, in a thoughtful touch. “I’m just not one.” Picture day at school and Halloween (with highly gendered costumes) are particularly difficult. One day, he explains to some new friends that everyone thinks he’s a girl, though he’s really a boy. The friends observe that he’s like their cousin, a transgender girl. Lyons gathers his courage and speaks with his parents about his true identity. They listen and support him in getting a haircut. A heartfelt and personal story.

For preschoolers, “Kevin Keller’s Favorite Colors,” from Little Bee Books, stars the Archie comics’ first gay character explaining the meaning of each of the colors in the Pride flag (including the recent additions of black and brown), as other characters from the comic demonstrate. Three very similar books came out last year: Little Bee’s own board book “Our Rainbow”; “Rainbow: A First Book of Pride,” by Michael Genhard (Magination Press); and Robin Stevenson’s poetic “Pride Colors” board book (Orca). Aside from the use of Archie characters, this book adds little that is different — and one might wonder whether a comic depicting high schoolers will really appeal to children still learning their colors. Adult fans may want it for their children, though, even if the genre feels saturated.

Dana Rudolph is the founder and publisher of Mombian (mombian.com), a GLAAD Media Award-winning blog and resource directory for LGBTQ parents. Join her June 1, 2020, for #LGBTQFamiliesDay: post, tweet, and share in celebration and support of LGBTQ families.