QFLIX, the area’s LGBTQ+ film festival, postponed its March event because of COVID-19. However, the festival now plans to stream a virtual fest in June and hopefully (if prudent), screen a combination live and online festival November 15-22. The signature Black and Pink opening gala is scheduled for November 15 at One Liberty Observation Deck, with the theme, “Feathers, Boas, and Wigs.”

Meanwhile, the qFLIX team has been actively working to set up streaming options for queer cinephiles during this shelter-in-place period.

Earlier this month, qFLIX initiated a partnership with Magnolia Pictures to offer the distributor’s films through a virtual screening platform. On May 15, qFLIX started hosting “Slay the Dragon,” an inspiring documentary about gerrymandering. The film will be available until the end of May.

Beginning June 1, qFLIX is planning a series of screenings for Pride month called PrideFLIX, the Virtual Pride Film Festival. Each week, the fest is hosting one feature, one documentary, a web series and a late-night feature on a virtual theater platform. Films will be available for a week at a time, with popular titles extended as viable. One dollar of every “view” will benefit Philadelphia-area LGBTQ pride organizations.

Bill Egan, who produces the festival along with Thom Cardwell and James Duggan said, “We are doing our part to fill the void created from the postponement of this year’s pride. By supporting this virtual festival, folks can support future pride events. If we all can’t be together in person, at least we can come together virtually and share our stories and create the emotions and experiences that our festival-goers appreciate when they attend qFLIX each year.”

Added Duggan, “We’ve been thinking about virtual screenings for a few years now, and the virus moved us in that direction.”

What was planned as a temporary solution will actually become the launch of an annual virtual pride film fest that qFLIX is planning to do every June in conjunction with Pride month. Viewers can pay for individual films or purchase a month-long festival pass.

One of the highlights of the June virtual cinema festival is a screening of out gay writer and director Mike Mosallam’s appealing, affectionate romcom, “Breaking Fast.” The film stars out actor Haaz Sleiman as Mo, a heartbroken gay Muslim who meets — and eats with — Kal (Michael Cassidy) during Ramadan. Because the Holy Month forbids impure thoughts and activities, Mo is forced to practice self-control. Mosallam’s clever conceit allows Mo and Kal to fall in love as their relationship develops over numerous romantic meals and dates.

Sleiman and Mosallam, who were to be honored for their work at the fest in March, will participate in a post-screening talkback via Zoom on June 29 along with Seth Hauer, the film’s producer.

Other LGBTQ films scheduled — and being pursued subject to availability — for the fest include:

“Straight Up,” out gay writer, director, and star James Sweeney’s funny and talky romantic comedy about a gay man (Sweeney) who re-evaluates his desires when he falls non-sexually in love with Rory (Katie Findlay), a straight woman. The pair are charming as they navigate uncertain waters in this amusing spin on the gay guy and straight girl dynamic.

Out gay actor-turned-writer and director Mike Doyle’s “Almost Love (aka Sell By)” a comedy-drama about gay and straight friends grappling with issues of trust and jealousy, intimacy, and communication. Out actor Scott Evans stars as Adam, a frustrated painter whose five-year relationship with Marklin (gay actor Augustus Prew), an internet influencer, has hit a snag. Their friends, which include Cammy (the fabulous Michelle Buteau), Haley (Zoe Chao), and Elizabeth (Kate Walsh), are all in tricky relationships as well.

“Huckleberry,” a thriller about the trans title character (Daniel Fisher-Golden) whose friendship with Jolene (Sarah Ulstrup) is tested when she asks for Huckleberry’s help in dealing with her violent boyfriend (Justin Rose).

Documentaries include the crowd-pleasing “Gay Chorus Deep South,” about the week-long goodwill tour the San Francisco Gay Men’s Chorus took in five southern states with strong anti-LGBT laws. The music is wonderful, but it is the how the chorus changes the minds of the people they meet — and how the people change the minds of the chorus — that reverberates.

Another powerful documentary is “One Taxi Ride” about a young man in Mexico City who shares a traumatic experience from his past with his boyfriend, which raises issues of truth and trust.

Web series to be showcased include “Sadulous,” a timely entry about Philadelphian Alejandro (director Alejandro Morales), a gay Latino who hasn’t left his apartment in weeks. An LGBTQ comedy showcase featuring Morales is planned for June 23.

Several of the films screened in the virtual theater will include talkbacks with filmmakers and/or talent. In addition, qFLIX is planning a weekly moderated discussion of specific titles on Sunday nights in June to help foster a sense of community during this period of social distancing.

Although programming is subject to change, for detailed information on schedule information, tickets, talkbacks, discussions and more, visit http://www.qflixphilly.com/. 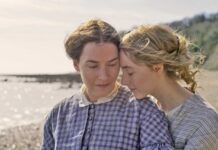 An unlikely, tender romance in “Ammonite”