“The Half of It,” available May 1 on Netflix, is only the second feature by out lesbian filmmaker Alice Wu — after 2004’s “Saving Face” — but it is worth the wait. This fabulous romantic comedy, set in a rural high school, is as charming as it is thoughtful. Moreover, it offers messages about love that are tender and heartfelt.

Ellie Chu (Leah Lewis) is an overachieving senior who makes cash writing papers for her peers. When Paul Munsky (Daniel Diemer) hires Ellie to pen a love letter to Aster (Alexxis Lemire), she reluctantly agrees. Ellie is secretly crushed on Aster, and as she gets to know the object of Paul’s affection better, she comes to understand herself more.

“The Half of It” may be steeped in a “Cyrano”–esque trope for the texting generation, but it shows how Ellie’s friendship with Paul improves both of their lives. It also illustrates how her unlikely connection with Aster sparks a sense of independence for each of the young women.

Wu chatted with PGN about her new film.

What were you like in high school? Were you, like, Ellie, the only Asian and/or closeted queer student in your class?

My high school was fairly racially mixed. I didn’t grow up in a small town, but I was called “Chugga Chugga Choo Choo,” and biked everywhere [like Ellie]. I was so shy in high school. I just remembered walking down the hallway, hugging the wall because the last thing I wanted was attention. If you told me that kid would someday direct a film, I’d never believed it. I think high school was a profoundly lonely experience, but as an adult, you realize it’s lonely for everyone — even if, at the time, it looks like others are having a much better life. When I was in high school, nobody was saying they were queer. When you are growing up, and you are not out, all of your crushes are taboo. Ellie doesn’t have queer consciousness, but she does have a crush on Aster, and she’s not ready to admit this to herself. I had a crush on the same girl for all three years of high school.

The teens in “The Half of It” are respectful of their families but still find a measure of independence. Can you talk about that theme?

I think it stems from my naturally not being a rebellious person, but coming out at 19 felt like a giant rebellion. If I could have married a guy I would have, because I didn’t want my parents to be unhappy since they sacrificed for their kids to have this life. The characters in “The Half of It” do love their parents. And the parents are thinking they are doing what’s best, and yet things go awry with families. Ellie’s [widowed] father doesn’t want to keep Ellie in a box, but he lost the love of his life and he’s terrified and wants to protect his daughter.

In the film, Ellie is more cynical, and Paul is more romantic. Which are you?

I have a dry sense of humor. I can be sarcastic. But I’m not cynical. I was romantic growing up — and there’s a part of me that’s deeply romantic — but I’m also very practical. I come from young immigrant parents. I’d be Ellie, but her cynicism hides a deep romanticism. Part of the deliciousness of “The Half of It” is the idea of being able to woo your crush with the safety of a ventriloquist. And discovering this connection — of having that person liking what you have to say. It’s more doing something out of love — it can be wrong — but that is the more interesting thing to show. I love things that are happy-sad and connected to greater humanity. That is hope.

Do you agree with Ellie’s comment that “everything beautiful is ruined eventually”?

Yes and No. I think as I’ve gotten older, life ebbs and flows. Right now, I’m in a good moment. I have a film coming out. But I realize everything is great right now, and I’m going to hold on to this, but the arc of life is ebb and flow and part of my growth is that as things are going well, the cycle will go down. But when things are really sucky, I have to hang on because they will swing up again.

I cannot answer that question. There are so many. But I can tell you what is meaningful to me. The quiet scene of Ellie and her dad making dumplings, and I also love Ellie in the hot springs with Aster. 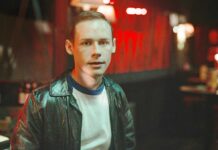 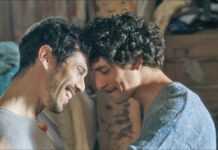 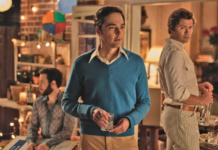