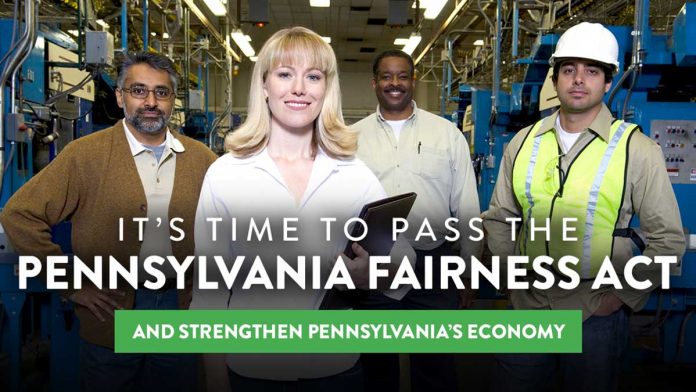 Last week, Virginia became the first state in the South to pass a  law protecting LGBTQ folks from discrimination. While Philadelphia has a nondiscrimination ordinance, Pennsylvania still does not. It’s hard to think about anything but COVID-19 during this time, but for years our Democratic legislators have worked toward passing a Pennsylvania LGBTQ nondiscrimination law known as the Fairness Act, with no success. A Republican-controlled Senate has meant that the law goes nowhere session after session, year after year. Not protecting LGBTQ folks from discrimination is archaic at this point, and Pennsylvania stands out in this region as one of the only states without such a law. New Jersey, New York, Delaware, Maryland, Washington, D.C., and now Virginia all have LGBTQ nondiscrimination laws. The only nearby states that do not have a law protecting our community are West Virginia and Ohio. During COVID-19, the effects of not having a statewide nondiscrimination laws are apparent, as LGBTQ folks face increased homelessness and joblessness. The Williams Institute reports that 22% of LGTBQ people and 16% of straight-cis people live in poverty in the U.S. In rural communities, where local nondiscrimination ordinances are even less likely to exist, 26% of LGBTQ people live in poverty compared to 21% in urban areas. If, at the very least, LGBTQ folks don’t have workplace and housing protections against discrimination, economic equity is not even in the realm of possibility. In November, Pennsylvanians have the opportunity to vote for folks who can pass LGBTQ nondiscrimination legislation. As we see each state around us passing such laws, let it motivate us to fight for the most basic rights, so that we can then strive for something akin to equity.