On April 18, 2015, Ashlee and I exchanged our wedding vows before more than 100 family and friends. We talked about a future filled with a home, a dog, kids, family holidays and growing old together. We wrote each other letters and, during the ceremony, locked them inside a box with a bottle of wine, all of which was to be opened on our fifth anniversary, which we envisioned would be spent on a romantic getaway.

Reality: This April 18, Ashlee will be attending her nursing clinical session in our bedroom — demonstrating a head-to-toe assessment on one of our son’s stuffed animals through Zoom, in lieu of the in-person class. I’m going to mow the lawn and take our 20-month-old and dog on multiple walks through the neighborhood. We’ll likely Grubhub some dinner (Ashlee’s surprise overnight getaway was canceled) and pop open our five-year wine while we pop in the DVD of our wedding, an annual tradition. We’ll assume our accustomed spots on the couch, which we’ve worn in as we hit day 36 of our home lockdown; the night before I will have set out clean clothes on our back deck for Ashlee to change into surreptitiously before she comes inside, as she finished out her first week working in the local hospital treating COVID-19 and other patients, transferred from her family practice amid healthcare worker shortages.

“Through better or worse, sickness and health” never meant so much as it does this year. The variations of those words we uttered five years ago didn’t really bring with them visions of a global pandemic and the unparalleled repercussions that have come with it. But, in a sense, readjusting to reality has been a mainstay as Ashlee and I have navigated marriage and parenthood. And it’s in those moments that we’ve learned the most about ourselves, one another and our love.

About a year after we got married, we bought our first house. We envisioned popping champagne, admiring the perfectly manicured lawn of our beautiful single house and getting right to decorating in full Martha Stewart fashion. In actual life, we bought a twin whose backyard held a lot more mud than grass, along with a crumbling fence, a shed that very well may have been from the early 1900s when the house was built — and we still don’t have all of our decorations up, four years later. (In fact, just today I hung a few frames in our kitchen — pictureless — out of quarantine boredom.) But it was in the literal blood, sweat and tears we had to expend to take down our fence and our shed that we got to appreciate one another’s drive and ingenuity (if anyone’s ever tried to manually collapse a century-old towering wooden structure, you know what I mean). As we decorated sporadically over the years, we’ve butted heads more times than I count, but in those spats, we learned how to compromise, when to know how to give a little and to appreciate one another’s quirks (Ashlee’s inexplicable appreciation for all things Buddha have taken over our living room).

Once we had a little more space, we wanted to fulfill our longtime desire for getting a dog. We pictured a fluffy, cuddly addition who would be our first foray into building our family. What we actually got was an awkward, anti-social, slightly manic rescue pup who detests affections, is a serial food stealer and flunked dog obedience school (and whom we love dearly, of course). While we were thrown for many a loop with every time she ate our TV remote (we’re up to seven replacements, so far) and every small child she knocked down on what we had envisioned would be peaceful neighborhood strolls, those moments helped me see Ashlee’s propensity for patience and her ability to nurture through annoyance. The unexpected aggravations our badly behaved dog have brought showed us strengths we didn’t know we had, nor that we would need for raising a dog.

That became crucial as we embarked on parenthood. Through each step of the journey of getting pregnant, I got to see Ashlee’s resilience, which I didn’t realize would be a vital component of our path toward becoming parents. With each negative pregnancy test we got, she cried and got right back to the hormone shots and medications. Pregnancy brings with it a lot of ups and downs, and hers had a lot of downs: nausea, swelling, she lost her front tooth: You name it and she had it. But she took it in stride and couldn’t wait to hear each heartbeat and feel each kick.

When Jackson arrived, our vision of a perfectly plump, pink little baby cooing was shattered the first night in the hospital — as our preemie, 5-pounder had a set of healthy lungs that seemed to go off like an alarm clock every hour. In the months that followed, sleepless nights, wild postpartum hormones, health scares, the impossible work-life balance and more sidetracked our view of what family life would look like. But in those low points, we found out who we both were as parents, and as a couple. I knew that, when I started panicking as we rushed Jackson to the hospital when he had RSV, that Ashlee would be able to simultaneously soothe him and tell me to chill out. And when I noticed Ashlee’s nursing school workload was starting to take its toll on her, she could trust that I would spend a weekend filled with toddler activities like library trips and walking the local mall to give her some time to study and decompress.

As of this week, we’ve been together for 13 years and, after all that time, I thought I knew everything there was to know about Ashlee. But the last month-plus in quarantine have brought us more obstacles — that, in turn, have turned into lessons. Being stuck in the house with a little one is a challenge, but it’s helped me to see Ashlee’s creativity: She makes the best airplane noises and builds award-winning forts. Her fearlessness is perplexing: She’s eager to don her PPE and treat patients for some hands-on nursing education but runs from bees on our family walks. It’s in those walks and other simple moments — nighttime firepits, laughing too hard at Leslie Jordan’s Instagram quarantine videos — that we’ve learned together how to process the stress we’re all feeling right now.

The last six weeks have been immensely tough for most Americans. But if the last five years have taught me anything, it’s that the moments that were the most unexpectedly challenging — that pushed me and Ashlee to our limits, made us doubt ourselves and forced us to readjust to a new reality — brought with them the most opportunity for growth. While our fifth anniversary may look and feel a bit different than we thought it would back in 2015, the state of the world has me embracing that change and simply being unbelievably grateful for an incredible wife and the beautiful life that we’ve built. Happy fifth anniversary, love. 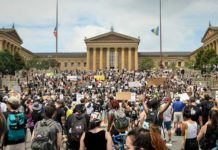 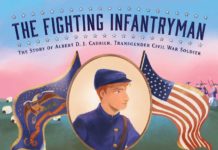