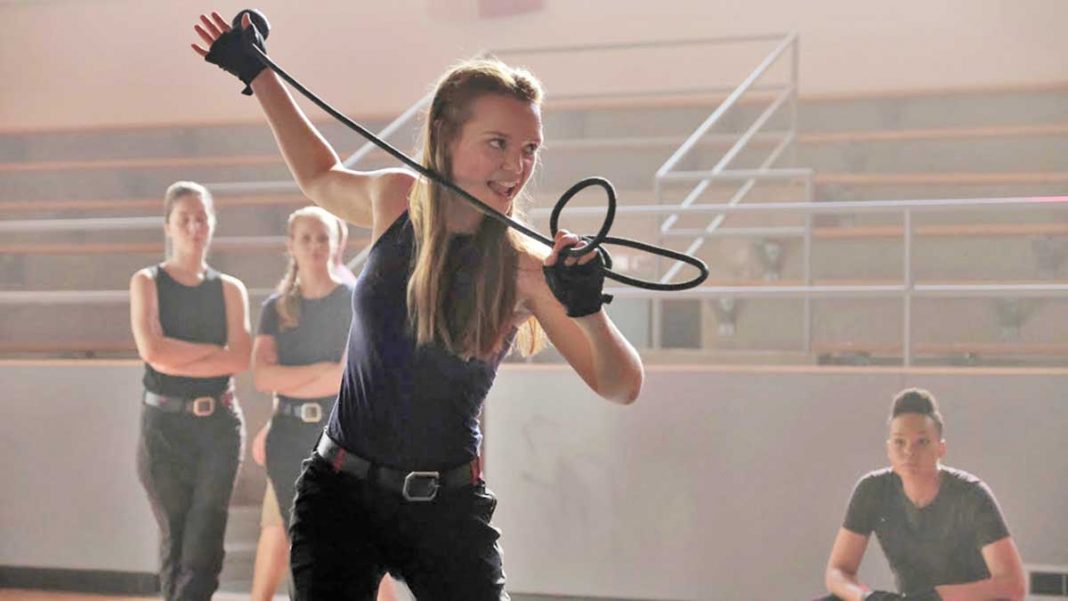 Witches have been an ever-popular TV trope since the 1960s hit series “Bewitched.” But the queer witches of Freeform and Hulu’s new series “Motherland: Fort Salem” are witches for now, in this dystopian coronavirus moment.

“Motherland,” set in a fictional America, follows the witches of Salem, led by General Sarah Adler (Lyne Renee), who made a pact 300 years ago with the nascent colonial government to save their lives by agreeing to use their powers to benefit the country — in perpetuity.

Their daughters and their daughters’ daughters would be the heirs to a paramilitary witch force with supernatural powers. These witch warriors have grown up in “matrifocal” enclaves, devoid of men or men’s influence, pedagogy and oppression. The witches’ role is to protect the country from terrorists — foreign and domestic.

The opening scene is stunning. No spoilers, but what begins as a rhapsodic holiday sequence — it’s Conscription Day — at the mall, ends quite differently.

On Conscription Day, witches all over America are drafted into the army. The country has been split apart by something called “The Cession” —  the details of which remain to be revealed.

The opening credits follow a devastating scene at the mall, and afterward, the three main characters are introduced.

Abigail was born to be a general. Her mother has just retired from her position as a top general, and Abigail is expected to be a leader. She already sees herself as one and craves power and control. Tally is excited about being a recruit, but her mother — knowing what lies ahead for her daughter — begs her not to go to Fort Salem. Raelle has a different agenda — she wants to fight and die for the cause, until she meets the mysterious Scylla (Amalia Holm). A natural healer, Raelle has powers that take her in a different direction from her compatriots.

These are the gender-nonconforming women of our wannabe future — they are smart, cunning, strong and powerful. They are built to heal as well as fight; their powers are multi-faceted, and so are their desires.

Spoiler alert: in the very first episode, there is blazing, no-holds-barred sex between two women. This is not your mama’s fade-to-black, encoded, closeted witch TV.

The three principles are a top unit at Fort Salem, and how they rank is dependant on each achieving her highest potential. But Raelle gets wooed away by Scylla and gets a demerit. The group’s drill instructor, the stern and exacting Anacostia Quartermain (Demetria McKinney), tells Raelle that “they see everything.” The witch generals and their advisors miss nothing at Fort Salem.

Raelle’s misstep doesn’t sit well with Abigail, who goes to the commander to request a change of unit. The trio is already at odds.

“Motherland: Fort Salem” offers myriad enticements: the gender-nonconforming setting allows the women to express themselves honestly and without shame. There isn’t a moment when Raelle is anything but open about her sexual identity.

The witch as metaphor is striking in “Motherland” — in a society that others women, these women have embraced their otherness and turned it into a dynamic strength.

In an interview with Fox News, the “Motherland” actors talked about working in an almost wholly women’s environment — the show’s writers and directors are mostly women.

“I love the female empowerment in this show,” Williams told Fox News. “We want other women to be empowered from our show, and we want to tell them that they can be anything they set their mind to. You have a voice.”

Hickson, whose character Raelle is openly lesbian, said, “Exploring this rebellious [character] taught me so much about myself, and it opened my eyes to damaging social constructs that I hadn’t realized were still present.”

She added, “We want our viewers of every kind to feel heard and supported and like they belong and they have they have a place to go and in times of need.”