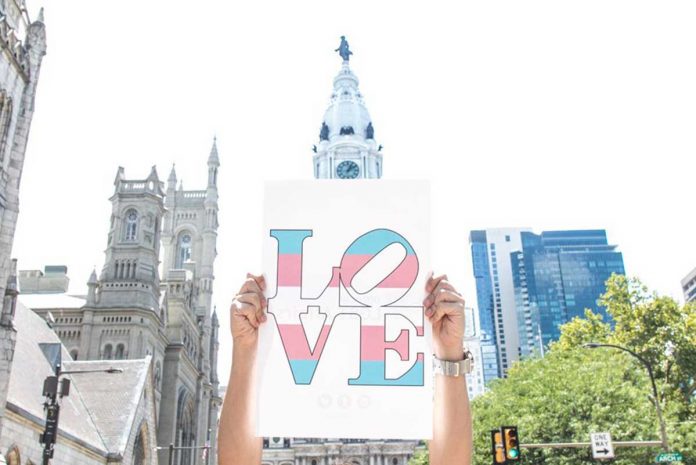 Despite the continuation of Philadelphia’s Stay at Home Order and subsequent event cancellations, members of the transgender community, and allies, still celebrated International Trans Day of Visibility virtually and through social media.

Celena Morrison, newly appointed executive director of Philadelphia’s Office of LGBT Affairs, Office of Diversity, Equity and Inclusion, created a blog post called “10 Things You Can Do for Transgender Day of Visibility,” even before the city called for shutdowns. The city’s temporary suspension of non-essential operations led to the cancellation of the Trans Flag Raising.

“I just wanted to encourage folks to do what they can, whatever amount of support they can lend to the community on this day – whether that’s physically, virtually, in spirit,” Morrison said. In her list, she encouraged people to attend virtual TDOV events, learn about trans history, support trans-led organizations and educate themselves about the differences between gender identity and gender expression, for example.

“Many folks don’t know that trans women of color were on the front lines of Stonewall,” Morrison said. “Educating oneself, allies, the community — all of those things are different ways to show our support.”

“I think it’s important for folks to reflect on the strength that it takes for one to live authentically of who they want to be in this day and time,” she continued. “For years, we thought it was really tough just being a person of color, but being a trans woman of color ‚— it doesn’t get any tougher than that. Whether it’s trans women of color, gender nonconforming folks — anyone who identifies under the trans umbrella, it takes an extreme amount of courage and strength to walk your truth every day in this climate that we live in.”

The Office of LGBT Affairs also published a TDOV Toolkit, which includes TDOV social media hashtags, links to Morrison’s blog post, a letter explaining the importance of TDOV in the wake of event cancellations, as well as a list of some of the LGBTQ organizations that are still open at this time.

“It’s a time to celebrate the resilience and the monumental contributions that trans people have made in our community,” Morrison said. “Look at the work that Dr. Levine is doing, we can’t ignore that. Dr. Rachel Levine serves as Pennsylvania’s Secretary of Health, and is openly trans. “There are folks in our community who have done great things, and continue to do great things,” Morrison added.

Mikah Thomas, recruiter for the Trans Equity Project, a program of GALAEI, organized a mini-campaign on Instagram and Facebook to celebrate TDOV. He reached out to LGBTQ organizations asking for them to support his campaign, which consists of a digital sign with four fill-in-the-blank questions: “I’m celebrating TDOV by…,” “TDOV matters because…,” “For TDOV I…” and “Why is TDOV important?”

“We’re looking to bring ourselves together and show that we are visible,” Thomas said. “I feel like this gives us all motivation to still manifest what we were doing, even though all these things were canceled. We’ll still be able to do it eventually, but we have to get our words out so we can make history. I’ve only been transitioning medically for two years; I stopped working in behavioral health to be closer to the LGBT community and to figure out how to not feel alone in the community. To be the recruiter for the Trans Equity Project at GALAEI has let me be more involved in the community.”

The trans support group TransWay held virtual meetings in honor of TDOV. The group met online from 9-10 p.m. to check in with each other to see how they were feeling emotionally in relation to social distancing and their trans identities, said Kendall Stephens, TransWay’s co-facilitator along with Elizabeth Coffey Williams.

Stephens described TDOV as a way for trans community members to “live visibly and authentically. [The day] also serves as a battle cry for trans folk or gender-nonconforming folk and our allies that we need everyone in our community to step up to end this systemic discrimination.”

“No matter what the world may think at times, it’s about how we feel inside,” she said. “We often spend so much time preoccupied by all the bad things that happen while being trans. Today we [focused] on all the amazing qualities that we have and [talked] about the beauty of who we are.”